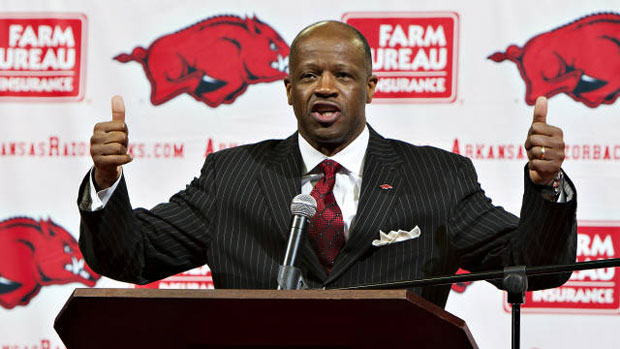 I can’t help myself: I love Mike Anderson/Nolan Richardson comparisons.

As an Arkansas native, I firsthand remember growing up in the 1990s and breathlessly following each of Richardson’s Razorback teams. That experience — along with watching my classmates Joe Johnson and Jarrett Hart play at LR Central — seared into me a deep love for the game of basketball.

Nolan Richardson himself has told me he doesn’t expect Anderson to follow exactly in his footsteps, and Anderson has publicly said just about the same thing. These men are too old and accomplished to worry much about metrics, notching marks on belts, counting golden, basketball-shaped bullion and that kind of thing.

I love it. Numerical comparisons appear to cleanly tie together different eras of Razorback basketball so many decades apart. They also provide a clear standard of success. The bar had been set. So let’s ask: Is Anderson meeting it?

When comparing the coaches’ first seasons on the Hill, Mike Anderson comes out ahead. Neither coach made the NCAA tourney in Years One or Two, but Anderson’s overall 37-27 record was superior to Richardson’s 31-30.

Year Three for both coaches got off to a bad start, as sportswriter Jim Harris points out:

After two seasons of inconsistent play and fans wondering if Frank Broyles had erred in replacing Eddie Sutton with the man in polka dots and cowboy boots. That third season got off to as woeful a start as any — a blowout loss AT Tulsa, the school that had produced Nolan in the first place. It’s pretty much forgotten now. But it was not much uglier than the Hogs’ SEC-opening trip to Texas A&M in Anderson’s third year.

Turns out, neither drubbing foretold what would eventually happen.

Arkansas wasn’t as bad as that season-opening loss at Tulsa indicated in 1987-88, eventually pulling together to compete for the [SWC] championship and earn an at-large bid in the NCAA Tournament…”

Of course, while Nolan did start churning out NCAA Tournament appearances in that third year, Anderson only produced one in his seasons three through five.

But with 23 regular season wins, including six on the road, Arkansas will return this season.  In doing so, Mike Anderson’s Hogs have so far strung together a three-year run that is better than any in his mentor’s last seven seasons.

Since the beginning of the 2014-15 season, Anderson’s teams have won 66 of 99 regular season and postseason games. That’s a 66.67 winning percentage.

I dig into this more for an upcoming OnlyInArk.com article, but for now imagine the best three-year runs Arkansas basketball has had since the 1994-95 season when the Hogs finished as the national runner-up.

Those happened, not surprisingly, not long afterward in the late 1990s, when Kareem Reid, Pat Bradley and Derek Hood consistently led  Arkansas into NCAA Tournament appearances after leading them to a Sweet Sixteen appearance in 1996:

(*The aforementioned trio had left by this season, and the Jannero Pargo/Joe Johnson era had begun)

After that, as we slide into the last couple years of the Richardson era, and then into the Stan Heath and John Pelphrey eras, it only gets worse.

Without the same kind of postseason success Richardson had even in the late 1980s and late 1990s (i.e. outside of the peak years of the early-mid 1990s), these kinds of statistics will ring hollow with many Razorback fans. But they still provide some value. They show while Anderson’s teams have seemed maddeningly inconsistent at times, he is overall tracking ahead of his mentor when compared to Richardson’s early-career and late-career team performances.

For Hog fans, two main questions endure: What is Anderson’s ceiling? How close will it be Richardson’s?

With the elite levels of talent, size and athleticism Anderson has coming in these next few years, we’re going to get that answer sooner than later.