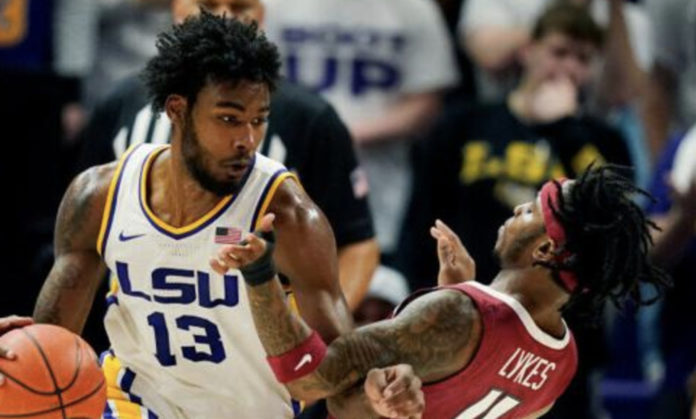 Not many college basketball followers were fans of the old Ratings Power Index (RPI) system. It was an outdated way of ranking teams based solely on winning percentages of both teams and held no context into how the teams actually played, where the game took place, or an accurate measure of the quality of opponents.

The current NCAA Evaluation Tool (NET) rankings, in turn, burst onto the scene after the 2017-18 season to replace the RPI as a more accurate tool when ranking college basketball teams. The NET rankings use a team value index that considers opponents’ NET rankings as well as a team’s offensive and defensive efficiency both on the road and at home. For the most part, this system works well in establishing the hierarchy of DI college basketball teams.

The difference in NET rankings between LSU (16th) and Arkansas (23rd), however, provides a glaring example of a flaw still remaining in the algorithm. The NCAA notes that game date or order is not considered in the ranking algorithm, meaning that a team’s first game holds the same amount of weight as their most recent game. This is the only logical explanation for why LSU, a team that is 5-8 in their last 13 games including losses to Vanderbilt (74th), South Carolina (91st), and Ole Miss (110th), ranks seven spots higher than an Arkansas team that has won 13 out of 14 games including wins over Auburn (11th), Tennessee (8th), and most recently Kentucky (4th). So far this season, LSU is 5-7 in Quad 1 games, 4-1 in Quad 2, 6-1 in Quad 3, and 5-0 in Quad 4. Arkansas is 5-4 in Quad 1, 6-1 in Quad 2, 5-1 in Quad 3, and 7-0 in Quad 4.

These two teams are set to meet for the second time this season on Wednesday night, this time in Fayetteville after Arkansas won the first contest by a score 65-58 in Baton Rouge in January, giving the Razorbacks their first win against a ranked opponent this season. Most recently, the Hogs beat No. 6 ranked Kentucky in Bud Walton Arena 75-73 to earn their 13th win in 14 games, including four wins against opponents ranked inside the Top 20. This win moved Arkansas up to No. 14 in the latest AP Poll heading into the final week of the regular season.

What to Expect with LSU Basketball on Offense

Tari Eason, a 6-8 transfer forward from Cincinnati, leads the LSU basketball team in scoring at 16.5 points per game. Against Arkansas earlier this season, Eason came off the bench to score 13 points on 50% shooting to go along with four rebounds and three steals. He is the Tigers’ most dangerous offensive weapon and will likely draw the defensive assignment of either Trey Wade or Stanley Umude for the majority of the game.

The Tiger backcourt is composed of two play-making guards in Eric Gaines and Xavier Pinson. Gaines, a 6-2 sophomore, started out hot against the Hogs in Round One and finished with 14 points, six rebounds, four assists, and four steals. However, it was the defensive adjustment to put Toney on the play-making guard that allowed Arkansas to capitalize on late-game turnovers (Gaines finished with four turnovers) and missed shots from LSU.

Pinson, a transfer former Missouri, paces his team in assists at 4.6 per game, though the 6-2 senior was unable to play the first time these teams met due to injury. Whichever guard isn’t tasked with fending off Toney’s lengthy defense will instead be matched up against JD Notae, who currently ranks second in the SEC in steals at 2.2 per game.

It’s the battle of the bigs, however, that could be telling in this matchup. Arkansas forward Trey Wade will likely draw the assignment of guarding familiar LSU basketball foe, Darius Days. The 6-7 forward has played eight games against the Razorbacks so far, splitting the series 4-4. In wins, Days averages 11.8 points and 9.8 rebounds while shooting over 61% from the field and 40% from 3-point range. In four losses to the Razorbacks, however, Days averages only 1.8 points, 4.0 rebounds, and shoots 13% from the field. The formula seems simple: stop Darius Days and you have a great chance at winning.

JD Notae was recently named ESPN’s Player of the Week after a pair of stellar performances in wins over Florida on the road and Kentucky at home. In those two games, the SEC Player of the Year candidate shouldered most of the offensive load, averaging 26.0 points and 5.5 assists per game while shooting 46% from the field and 31% from behind the arc. Notae has long since established himself as a premier offensive threat, not only in the SEC but in the entire country.

“It’s incredible,” Stanley Umude said of JD Notae. “He’s one of the best players in the nation. So it’s comforting knowing you are going into a big game with a guy like that. He takes the pressure off all of us just knowing what he can do out there. It shows what type of player he is showing up to big games like [against Kentucky]. 50% shooting and 30 points against one of the best teams in the nation at home…It’s just special to be able to play with a guy like that.”

Against LSU earlier this season, Notae scored 19 points and dished four assists while shooting 54% from the field and 33% from long range, helping Arkansas to secure their second straight victory in what we become a nine-game winning streak.

Jaylin Williams has continued to stake his claim as one of the most versatile big men in the country, posting his sixth straight double-double (16 points & 12 rebounds vs Kentucky) and 12th double-double in his last 16 games while continuing to defend the paint and stretch the floor with his shooting ability. It’s Stanley Umude, however, who has provided the biggest offensive spark alongside JD Notae during the Razorbacks’ recent success.

The 6-6 transfer forward is averaging 14.5 points per game and shooting nearly 45% from long range over his last eight contests, including a 3-5 shooting performance in Arkansas’s upset victory over Kentucky. Against LSU, Umude contributed only eight points on 1-3 shooting from distance. His newly-found confidence in his jump shot will be a key factor in the Hogs’ upcoming matchup against the Tigers.

Arkansas vs LSU: What to Watch For

Since January 9th, the Hogs have lost only once: a one-point road to Alabama directly following Arkansas’s major upset of then No. 1 Auburn. In fact, the first three teams to beat top-ranked Auburn this season lost their very next game. The “hangover game” is real.

Now, the Hogs are coming off of their second-biggest win of the season [14] over No. 6 ranked Kentucky. Arkansas head coach Eric Musselman will have to work his magic to keep his team focused and ready for the next game after Bud Walton Arena made for a movie-like atmosphere in their last outing versus Kentucky. Playing on their home court again should help the Hogs maintain their focus, but it will absolutely be something to pay attention to against a solid LSU squad.

“I want our players to understand we have a lot of areas we can keep improving on,” said Musselman of his team remaining focused through recent success against high-caliber teams. “I’ve never been happier and prouder. It’s a fun group. We’re having a blast. We’re grinding in practice. But we’re having fun, too. You want your student-athletes to have an experience of a lifetime and to play in front of that crowd and be able to win… But, we have to get ready for LSU. That’s part of the package as well.”

ESPN’s BPI gives Arkansas a 58% chance of defeating LSU at home. Arkansas leads the all-time series 39-34, including going 3-3 under coach Musselman in the last 2+ years. Arkansas has won three of the last five match-ups played in Fayetteville, including an 83-75 victory in February of 2021.

The Hogs might experience some hangover side effects early in the game, but their defensive fortitude will ultimately prevail. JD Notae will continue his hot streak, scoring at least 20 points for the third consecutive game. The combined defense of forwards Trey Wade, Stanley Umude and Au’Diese Toney will hold LSU to a below-average shooting night. Razorback role players like Umude and Devo Davis will make big plays in the second half to push Arkansas to their 14th victory in 15 tries.

How to Watch Arkansas vs LSU