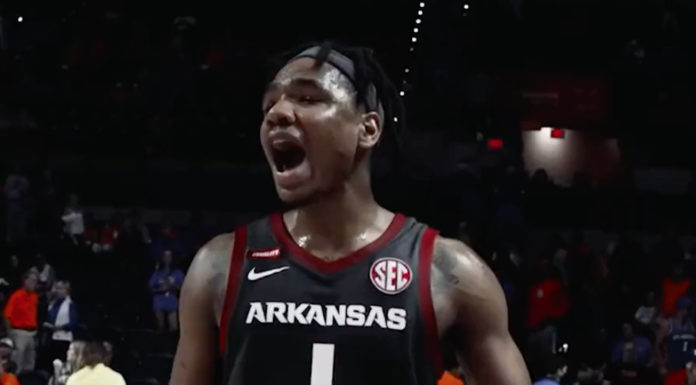 Take a moment, if you will. Consider the most beloved Arkansas basketball players in the post-Nolan Richardson era. Not the best ones, mind you, although the two are often intertwined. But consider the players who were considered renowned across the board, the Razorbacks who continue to live in the minds of Arkansas fans in the years that have passed.

Ronnie Brewer Jr., and then Sonny Weems, were the first real superstars. Rotnei Clarke had a cult following (until he didn’t – ahem). Bobby Portis has to be high on the list. As does Michael Qualls. Jaylen Barford and Daryl Macon are probably the 1-2 punch that comes to mind. Mason Jones was pure talent.

How about JD Notae? At what point does he crack the list?

The senior guard’s 30 points last Saturday against Kentucky, which culminated in Arkansas’ first win against the Wildcats at Bud Walton Arena since 2015, went a long way toward etching his name into the cement. The Georgia native has been the Razorbacks’ rock this season, being the team’s best scorer on one end of the court and the best thief on the other. Notae has scored in double figures in every single game in which he’s played this season, making him the No. 2 scorer in the entire SEC. His 2.2 steals per game rank him second in the league, too.

Until the last week or so, it was, perhaps, one of the quietest “best” seasons by a player in recent Arkansas history. Some of that national recognition came after Saturday when both ESPN and March Madness’ Andy Katz named Notae the National Player of the Week. Later in the week, CBS Sports’ Jon Rothstein named Notae to a shortlist of potential All-Americans. If Notae were to earn such honors at the end of the season, it would mark the fourth straight year an Arkansas player was named such, following Daniel Gafford in 2019, Mason Jones in 2020 and Moses Moody last year.

But Notae is different than those three in a few ways, too. Gafford and Moody are Natural State natives and were automatically beloved. Jones was the best player by far on a good-not-great team so fit the model almost by default. Notae is the same player some fans ragged on during the doldrum days of December and January when Arkansas lost five of six and its first three to start SEC play.

He was 3 of 14 from the field in the team’s first loss of the season against Oklahoma before Christmas and then 6 of 17 in Arkansas’ second SEC loss against Vanderbilt (he didn’t play against Mississippi State in the conference opener). Even during Arkansas’ current run, in which the Razorbacks have won 14 of 15, the Loud-On-Social-Media-Crowd – which never seems to have a take worth anything, so they shout into what should be a vast wasteland – gave him too hard of a time when his final-seconds shot against Alabama went far awry and Hogs lost.

Notae’s most recent outing – Wednesday against LSU – was not his best. But as the best collegiate player on the court for a majority of the 40 minutes, his sheer presence changed the game. The Tigers were quick to double-team him off high screen-and-rolls and force him to give up the ball and make the rest of the Arkansas roster beat them.

“JD, when he’s not scoring, he still comes up clutch,” Musselman said. “Two free throws obviously changes the game. Not a lot of guys can step up with that confidence when you’re not having a great offensive night. There’s so much attention that he draws even when he’s not scoring.”

Even in the midst of unfamiliar frustration putting the ball in the bucket, he dispensed daggers. With Arkansas ahead by just a point with about 10:30 to play, Notae did Notae things. He took the ball in hands on the right wing, shuffled, crossed-over and stepped-back, somehow ending up about a foot behind the 3-point line at the top of the key and buried a 3-pointer over the outstretched arms of an LSU defender. The field goal only lifted him to six points at that time. A possession later, LSU was back to doubling him, forcing him to give up the ball.

When the game was on the line, though, it was Notae who lifted the Razorbacks. He made a pair of free throws with 8.6 seconds left that proved to be the game-winners in Arkansas’ 77-76 win over the Tigers. He scored 12 points,  his lowest total since Dec. 1, on just 3 of 12 shooting. Meanwhile, he grabbed seven rebounds and doled out five assists.

Notae has scored in double figures in every contest he has played this season and has come up with heroics at the end of games more than once. And if Musselman trusts him, we should, too.

“JD and I have never…we’re, like, on the same wavelength. It’s really cool,” Musselman said. “He probably reads me as well as anybody I’ve coached to be honest. He knows I believe in him, knows I trust him.”