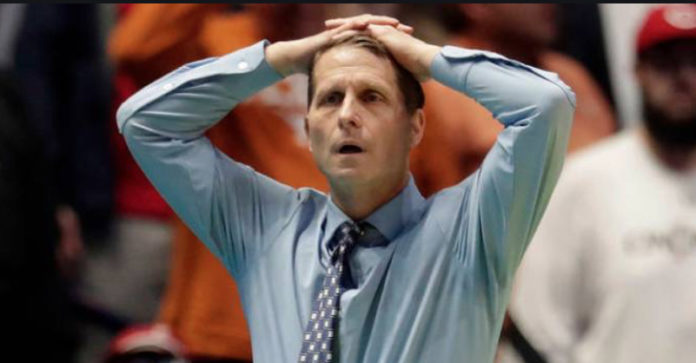 After a nail-biting, come-from-behind 77-76 victory over the LSU Tigers on Wednesday night, head coach Eric Musselman and his Razorbacks will set their sights back on a familiar foe. On Saturday, the Hogs will take on Tennessee for the second time in two weeks, this time making the trip to Knoxville for their final game of the regular season.

Heading into Arkansas’ victory over Tennessee in Fayetteville on February 19, ESPN’s BPI gave the Hogs only a 40% chance of victory on their home court. At the time, Arkansas had won 10 of their last 11 games, their lone loss being a one-point defeat against the Crimson Tide in Tuscaloosa. On the surface, it seemed preposterous that the scorching hot Hogs weren’t favored on their home court before the game even tipped, and the ESPN’s college basketball power index gained little credibility after the Hogs took down the Vols 58-48 in front of a raucous Razorback crowd.

On top of that, the chattering trolls pulling the levers for ESPN’s predictive machine essentially predicted that Arkansas would lose four of its last five regular season games.

Now, ESPN’s BPI is at it again, cranking out a laughably low chance of victory for the No. 14 Hogs on the road against the Volunteers. Should the Hogs be favored to win this game on the road? No, probably not. The No. 13 Volunteers are undefeated at home and a very salty bunch after beating Kentucky and Auburn in their last five games.

But the issue here isn’t that Tennessee would be favored. And it’s they are so overwhelmingly favored with a 83.4% chance of victory. ESPN giving Arkansas a nearly 17% chance of victory after having won 14 of their last 15 games, including a double-digit victory over the Volunteers, feels like a mistake, right?

Look, we understand these numbers are all the product of some secret sauce formula that involves opponent strength, pace of play, site, travel distance, day’s rest and altitude. It’s the same reason that every other team with six or fewer losses is ranked No. 12 or higher in ESPN’s College Basketball Power Index while Arkansas sits at No. 19:

The formula, however, clearly has some kind of flaw that needs to be addressed. Arkansas, at this point, should not be four spots behind a 10-loss LSU squad it has beaten twice. Even if Tennessee wins on Saturday, the Hogs should not be 11 spots behind on the Vols.

The SEC is too competitive, as a whole, for a team like Arkansas to still pay the price for “bad” losses a couple of months ago when its recent body of work should outweigh those results.

“This is a really good league,” Arkansas basketball coach Eric Musselman when asked about the gutsy LSU win. “Arguably as good a basketball league as there is in the country, and we’ve now won 14 out of 15 games with one game being a one-point [road] loss. This just doesn’t happen often where you can win at this clip. This team just finds a way somehow.”

Not only does this Arkansas vs Tennessee Round II project to be a heavyweight bout between No. 13 and No. 14, it will potentially have implications on the SEC regular-season title. No. 5 Auburn’s overtime victory at Mississippi State Wednesday night assured that they will at least share the SEC title, but at 14-3 in conference play, they are being closely chased by Kentucky, Tennessee, and Arkansas, all with 13-4 records. An Auburn loss on Saturday to South Carolina, though unlikely, would allow Kentucky and the winner of Arkansas vs Tennessee a chance at tying for first place in the conference.

What to Expect When Tennessee Has the Ball

During SEC play, Tennessee ranks 3rd in the conference in 3-point shooting at nearly 36% on 23.5 attempts per game. In the first matchup between these teams, Arkansas’s grueling defense held the Volunteers to 4-24 (16.7%) from long range, as well as 27% FG and 67% FT shooting. In home games this season, Tennessee basketball players have shooting splits of 43% FG, 35% 3P, and 72% FT. Arkansas will have to take their defense to a new level to slow down the Volunteers on their home court.

Kennedy Chandler and Santiago Vescovi lead the offensive onslaught of Tennessee, averaging roughly 13.6 and 13.5 points per game respectively. Against Arkansas, the two guards combined to score 18 points on 25% FG and 14% 3P shooting. In three games since their loss to the Hogs, they’ve combined to shoot 17-35 (48.6%) from the field and 13-30 (43%) from long range. Razorback guards JD Notae and Au’Diese Toney will likely be matched up with the pair of scoring guards, and their task of slowing them down will be exponentially harder on the road. It’s worth noting that Notae fouled out in his effort to contain these guards the first time around despite the victory.

Zakai Zeigler is the third part of Tennessee’s three-headed monster of combo guards. The 5-9 freshman shot 67% from distance against Arkansas earlier this season and shoots 39% 3P on his home court. Limiting the 3-point shooting will be key for Razorback guards, both as on-ball defenders and when their man is maneuvering screens and cutting off-ball.

Zeigler will be playing with an added weight in this game after it was announced that his parents’ home in New York tragically burned down along with all of their belongings. While our thoughts and prayers are with the young guard and his family off the court, it will be intriguing to see whether Zeigler plays with a new-found spark or if the off-court tragedy will impact him negatively in this matchup.

Attached below is information on how to donate to Zeigler’s family in their time of need.

Tennessee super-senior forward John Fulkerson will likely match up with Jaylin Williams once again. Williams won Round One, holding Fulkerson to only two points on 0-2 shooting in their first matchup. On the season, the 6-9 Tennessee forward leads his team in offensive rebounds per game at 2.1, though he finished with none the first time these teams met. Arkansas is coming off of a horrendous rebounding effort against LSU, allowing the Tigers to secure 22 offensive rebounds while only pulling down 29 total rebounds themselves. Securing the glass on both sides of the ball will likely be a focus in practice all week as the Hogs prepare for their final regular-season matchup against the Volunteers.

LSU did an excellent job of forcing the ball out of JD Notae’s hands in the first half of Wednesday’s game. The SEC Player of the Year candidate finished the first half with only three points, though he did manage to score 12 points before the final buzzer, including a pair of game-winning free throws. Before his clutch foul shots, Notae showed off once again just how great of a player he really is by contributing to the game in other ways.

He finished the game with seven rebounds, five assists, and a block while shooting 33% from long range and a perfect 4-4 from the charity stripe. Jaylin Williams notched another double-double with 19 points and 10 rebounds before fouling out late in the game. He also shot 55% from the field and 88% from the free-throw line during the victory.

Stanley Umude, however, kept the Hogs alive in their comeback win over the Tigers. He hit multiple timely 3-pointers down the stretch to help Arkansas regain the lead in what would be his last game in front of the Bud Walton Arena crowd. Against Tennessee at home earlier this season, Umude scored only five points in 39 minutes of play, shooting 17% from the field and 0-6 from behind the arc. Umude has an unexpected knack of shooting better on the road than at home this season, hitting at 54% from long range on the road compared to only 32% at home.

“We have some stuff for shooting forwards that we haven’t had to add to our play package…but we’re certainly going to add them to get [Umude] some open looks,” said coach Musselman after Umude’s performance against LSU. “When the defense is focused on JD [Notae], we’ve got to get [Umude] some higher quality looks than what I’ve been doing as a coach…We’re not going to play [in Bud Walton Arena] again so he’ll probably catch fire in some other building.”

The Razorbacks will need his abnormal road-game marksmanship if they want to give themselves a chance to knock off the Volunteers this Saturday.

Arkansas vs Tennessee: What to Watch For

Tennessee is one of the best passing teams in the country, ranking 2nd in the SEC in assists per game at 14.8 during conference play. All of the Tennessee basketball guards are well-coached and have a high basketball IQ, allowing them to maneuver screens and back-cuts better than most teams Arkansas will face. The Hogs have held SEC teams to only 31% 3-point shooting in road games this season, but Tennessee’s ability to share the ball and shoot 36% from distance could potentially give the Razorback defense fits should they have a lapse in focus.

Tennessee is also an elite defensive team, ranking 1st in the conference in the fewest points allowed at 66 per game. They also rank 2nd in fewest offensive rebounds allowed (8.9), 3rd in steals per game (9.1), and 5th in blocks per game (4.2). They’ve forced SEC opponents into an average of 15.3 turnovers per game, ranking them 4th in the conference. Arkansas only averages 12.0 turnovers during SEC road games, but they’ll have to be extra disciplined against a Tennessee team eager for revenge.

As noted, ESPN’s BPI is overwhelmingly confident of a Tennessee win in Knoxville. Tennessee leads the all-time series against Arkansas 23-22. The Hogs have won 8 of the last 12 matchups, but Tennessee has won four of the last six dating back to March of 2018. Arkansas is 2-2 against the Vols under head coach Eric Musselman, including their 58-48 victory earlier this season.

Arkansas will struggle to score the ball against a disciplined Tennessee defense and in front of a hungry Volunteer crowd. This game will be Tennessee’s senior night, as well as the last game of the regular season on a Saturday morning – the crowd will be rowdy and perhaps ready to atone for the way some Arkansas basketball fans flipped off their players coming off the court in Fayetteville.

Stanley Umude will lead the way offensively with his uncommon shooting on the road. Notae and Williams will put up respectable numbers, but the rest of the Razorbacks will struggle. Arkansas will lose the final game of the season in a well-fought battle, though it won’t be by as much as the BPI indicates it will be.

How to Watch Arkansas vs Tennessee

More on Arkansas vs Tennessee here: