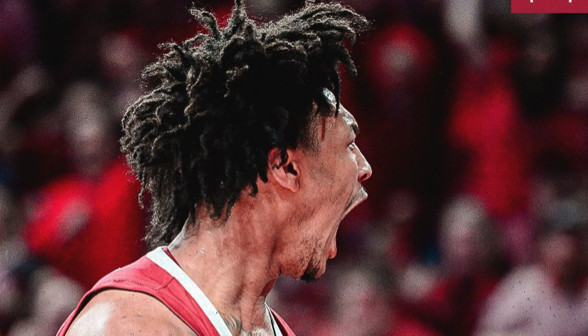 No court rushing. No shirt removal. Plenty of joy, anyway.

At this point in the season, with a victory over then-No. 1 Auburn already a distant memory to the players and coaches, Arkansas didn’t need to get out the ticker tape after Saturday’s 58-48 win over Tennessee. Coach Eric Musselman joined the Arkansas student section for a round of selfies afterward. Jaylin Williams walked by them, slapping hands, too. But the Razorbacks’ gutsy, at-times-violent victory over the No. 16 team in the country felt more to them like an inevitability than a shock-the-world moment.

The Hogs have won 11 of their last 12 games after beating the Vols in a demanding, defensive game at Bud Walton Arena. Three of those 11 wins have come against teams ranked in the Top 16 at the time. Combined with last year’s Elite Eight run, the 2021-22 Razorbacks are getting used to beating the best teams in college basketball. They’ll act accordingly.

Long gone are the days of Musselman’s post-game press conferences wherein he bemoans his team’s lack of effort in defending the 3-pointer or poor shot selection. A roster filled with five rotation players new to the team this season was always going to have difficulty meshing in the early going. Thus, the three straight losses to start SEC play. The normally energetic and affable Musselman was at his most dejected during those first couple of weeks of January.

But Arkansas isn’t the same team as that one. The Razorbacks still can’t shoot the 3-ball with much success, but every other single element has improved. Intensity chief among them, a trait that was showcased in spades during Saturday’s for-the-hardcore-only kind of win.

“Nobody plays harder in the country than this team right now,” Musselman said. “That was a great basketball game to watch if you like physical toughness. It’s a battle for loose balls. It’s a battle on the glass. It was physical.”

Finding the right combination of bodies has been paramount. Connor Vanover and the Robinsons, Jaxson and KK, have largely been sidelined in Musselman’s rotation. They had their opportunities earlier and KK even logged three minutes against the Vols (his first action since February 3), but the standard crew is now just eight players, down from the 11 or 12 that were seeking regular time back in November, December and even into early January. It’s to Musselman’s credit that he found the right blend on a team full of guys who have, among those vying for time, have all played significant minutes, either elsewhere or in years past.

No rumor of locker room discontent has floated. Some of that is probably due to the team’s consistency winning basketball games in the last six weeks. Winning cures a lot of ills. Even still, it was on Musselman to discover the winning formula. JD Notae was always going to be a part of it. Jaylin Williams, too, even if he only became a star in the last few weeks. The question was what combination of newcomers could play with two key pieces from last year’s NCAA Tournament team.

Saturday was a showcase for them. Notae and Williams led Arkansas with 13 points apiece and Williams picked up his fourth straight double-double, grabbing 16 boards. He took four charges, too. Au’Diese Toney, though, may have been Arkansas’ most important player. The Pittsburgh transfer is in the midst of his coldest offensive stretch of the season, shooting just 2 for 17 with a total of 14 points in his last three games. But even in the midst of his solid scoring early in the season, the points weren’t what made Toney stand out. It’s his ability to guard four positions with equal acclaim that makes him invaluable to the Razorbacks.

Tennessee point guard Santiago Vescovi was the Vols’ leading scorer entering the game, putting up 13.8 points a game. Between Toney’s defense and the constant barrage of boos and far-from-PG-rated taunts levied his way by the Arkansas student section every time he touched the ball, Vescovi was rattled all game Saturday. He picked up his fourth foul with just under 11 minutes left and by the time he returned, Arkansas had finally built a lead larger than four points for the first time.

“To be able to hold Vescovi to 1 of 9 from 3 and 2 for 13,” Musselman said. “Au’Diese was struggling offensively, but I felt like I couldn’t take him out of the game, because Diese can guard point guards and guard perimeter shooters. Even though Diese went 1 of 6, but he rebounded with 10 rebounds and his defense was phenomenal.”

A contingent of Arkansas basketball fans, namely college students, got so into the anti-Volunteers spirit that they flipped the Tennessee players off as they walked off the floor.

This is overboard. I get it – these students have done a tremendous job building back Bud Walton Arena into potentially the most intimidating home court advantage in the nation. The fans are worth 6-8 points every game for the Hogs and have played a big part in not only the last two home wins, but Arkansas beating 6 of its last 7 opponents ranked in the Top 25.

Keep doing what you do when the players are on the floor, but there’s no reason to get that ugly once they are walking away. Ugly behavior is the kind of thing that Missouri’s “Old Antler’s Club” section of students used to do to opposing players and coaches, frequently crossing the line in multiple ways.

Arkansas is better than that. Fans of the very best programs don’t feel a need to rub opponents’ noses in it. If you going to give the bird, give it to the opposing coaches who make millions of dollars a year, not the 21-year-olds who score a couple hundred bucks and free NIL barbecue here and there.

Now, back to the Razorbacks. We got to give a shout out to Chris Lykes, whose play has been, well, erratic for much of the season. He was considered the No. 51 player in the country in the preseason by the college basketball analysts at CBSSports.com, but things haven’t played out that way for him. A 5-foot-6 transfer from Miami (FL), Lykes has broken the 21-minute barrier just once in SEC play after doing so 10 times in Arkansas’ first 13 games. Instead, Musselman has determined Lykes is best used in bursts and in the late-game, where his 85% shooting from the free-throw line can seal games. That was the case against Tennessee when he went 6 for 6 from the line in the final 6:10 and 4 for 4 in the last minute.

South Dakota transfer Stanley Umude had just five points Saturday on 2 of 12 shooting, including an 0-for-6 game from 3-point range. But he was coming off a 21-point effort against MIssouri last time out and a 19-point, nine-rebound game against Alabama before that. Throw in his seven blocks and seven steals in his last seven games, and Umude provides another rangey, scoring wing to complement the fold.

In other words, give Musselman a PhD in chemistry. The solution was always in front of him and like any thorough scientist, he experimented. Now, with the formula yielding results, and the method to the madness not that mad at all, Arkansas is back to where it always belonged: one of the best teams in the country.

“You can’t play the game. Our guys were frustrated. I know it’s a hard call, but again, that’s the one, from the referee standpoint, I know they would tell you it’s one of the hardest calls. But that’s the one they’ve got to study, study, study. I mean, when a guy leaves his feet, he’s got a chance to come down. You can’t slide in at the end. Or if the guy is in the circle.”

“But we told the guys they do step down late. We told them that. Said you’ve got to be aware of that. Floaters are going to be difficult. But it’s tough when they come over and said, ‘Coach, I was in the air.’ All you can do is tell them you have to play on. Does it affect them? Absolutely, it does.”