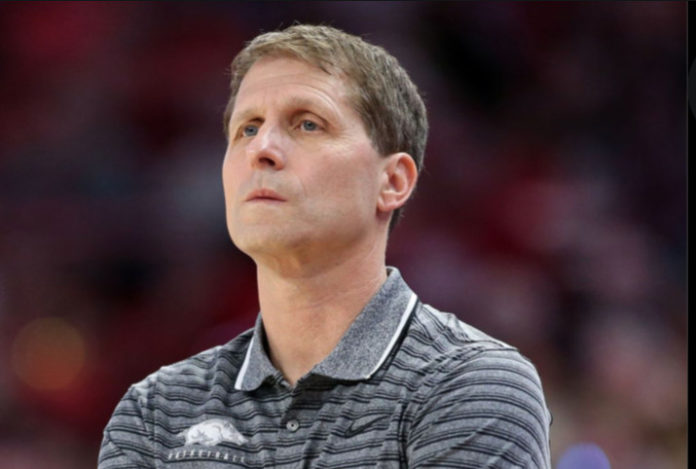 It’s not exactly a secret that ESPN and its talking heads are prone to taking the side of other, often bigger programs over the Razorbacks. Usually, there’s nothing premeditated or inherently malicious about it, so long as Razorback guard Chris Lykes isn’t involved. It’s just oversight or a reflection of the powers-that-be usually affiliated with other programs instead of with Arkansas.

Sure, there’s a Pat Bradley and Clint Stoerner here and there on the ESPN-owned SEC Network, but they aren’t enough to fully counter this tendency.

Like in 2020, when Tim Tebow on SEC Network laughed at the idea that Arkansas would defeat Ole Miss and predicted the Razorbacks were bound to lose (he was later called out by Mike Woods after the Hogs won). A few months later, on an SEC Network special about Arkansas basketball, the producers apparently couldn’t be bothered with knowing the difference between former Hogs Jalen Tate and Moses Moody as they confused one for the other.

Then, earlier this season, an ESPN announcer had a field day talking trash about Chris Lykes:

ESPN’s take on Arkansas vs Tennessee and Beyond

As well as the Razorbacks have been playing, the wizard(s) behind the curtain of ESPN’s Basketball Power Index don’t have much faith that Arkansas will finish the regular season well. No. 3 Arkansas, despite being among the hottest teams in the nation winning 10 of its last 11 games, including beating No. 1 Auburn and razor-thin defeat on the road at Alabama, is essentially predicted to lose 4 of its last 5 games.

Two of those losses, the algorithm predicts, will be against Tennessee. The first would be at home on Saturday afternoon. ESPN gives Tennessee a 59.6% chance to win in Fayetteville, a place where the Hogs have lost only once this year.

Apparently, the grouchy little elves who power this index believe that Tennessee’s perimeter defense will do enough to stifle Arkansas on the road. It’s true that the Vols have every bit as much of motivation to win this game as the Hogs. Right now, on the strength of two home wins vs Arizona and Kentucky, the Vols are a likely No. 4 seed in the NCAA Tournament. But they could rise as high as No. 2 by running the table in the regular season homestretch and doing well in the conference tourney.

“The road resume is the one thing that’s missing for Tennessee to present to the NCAA tournament committee,” Tennessee Vols analyst Josh Ward told John Nabors. “And this is the last real opportunity for Tennessee on the road. They go to Missouri and Georgia, but that would not be a big win, like if you’re looking at the NET ranking. So [Saturday’s] huge for Tennessee in terms of the opportunity.”

Without Arkansas as a road win, their current resume is slim pickings. “They just don’t have really anything that’s too impressive. North Carolina, neutral court’s the best away from home win probably. That or Mississippi State, neither one’s going to wow the committee.”

What’s disconcerting is how confident the ESPN elf-wizard-bots are that Tennessee is trending in a positive direction while Arkansas will fail to rise to the occasion against better competition in these last regular season games. For instance, the Razorbacks hardly get a chance in their season finale in Knoxville with only a 13.7% chance of winning.

So, Tennessee is supposed to be that much better than Arkansas at home?

After the Feb. 19 Arkansas vs Tennessee game is a road game at Florida on Tuesday, Feb. 22. Yes, Arkansas historically has a tough time with the Gators – especially on the road – but this isn’t as strong of a Florida team as in years past. The Gators are 6-7 in conference. Still, they get a 58.3% chance of winning.

After that is the Arkansas-Kentucky showdown in Fayetteville. Again, it appears ESPN thinks much more highly of Tennessee at home (where the Vols blew out Kentucky) than they do of Arkansas at home. The Razorbacks get only a 35.8% chance to win.

It’s not only the penultimate game, a home tilt vs LSU, that ESPN’s index again believes in the Razorbacks. But only barely: Arkansas gets 52.3% shot at winning.

Yes, the Razorbacks face a much harder five-game stretch now than at any previous point in the season. Almost certainly the Hogs will lose at least one game and possibly more. But, given how well Arkansas has been playing in the last 11 games, it’s a slap in the face to predict they are the likely winner in only one of these last five.

Of course, perhaps that’s just the kind of motivational fuel Eric Musselman and crew need to take things across the regular season finish line in style.

In November, in an early-season win vs Kansas State, SPN color analyst Mark Adams (with occasional help from play-by-play man Mark Neely) went off on the Arkansas basketball guard. Here are some of the things they said:

Arkansas vs Tennessee through Prism of Dave Van Horn Hatred

Tennessee has a slight advantage in its all-time series vs the Razorbacks, even though the program has had less success on a national level (the Volunteers have never gotten past the Elite Eight). Certainly, the potential for a rivalry is there. It just hasn’t been realized yet.

Same goes for football, where Arkansas vs Tennessee simply doesn’t happen enough for true bad blood to get brewing.

Baseball, however, is a different story. The two programs played two series and an SEC Tournament title game against each other in 2021. The two series were especially competitive, with Arkansas baseball coach Dave Van Horn and Tennessee’s Tony Vitello nearly getting into a fight after one of the games.

While the two coaches appear to have patched things up, ill will remains for Van Horn in Tennessee circles, Volunteers analyst Eric Cain told John Nabors on “Locked on Razorbacks.”

Before those games, “no one knew who Dave Van Horn was here in Knoxville,” Cain said. “No one knows who he is, but hey, might as well be Nick Saban. You hate the guy, right? Can’t stand him. And like you said, everybody immediately hates Arkansas baseball now, too, so I think that’s fun.”

John Nabors chimed in: “We don’t see Dave Van Horn do that type of stuff very often. He’ll do that to the umpires or get mad, but when everyone saw that against Vitello, everyone was like, ‘Wait, what could have possibly happened to set Dave Van Horn off that way? Especially two guys that coached together at Arkansas and knew each other.'”

“And so that’s what made it so crazy. And because of that moment alone, Razorback fans automatically just hate Tennessee. Even if Dave Van Horn was in the wrong, even if he was in the wrong completely, it doesn’t matter because you went after their guy.”

For the aftermath of Arkansas vs Tennessee, go here: