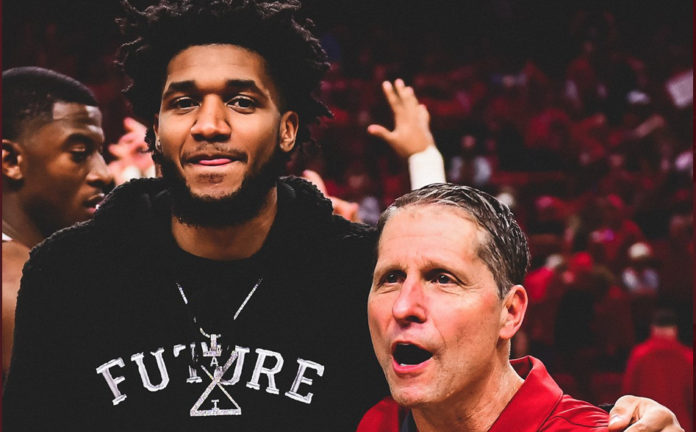 The Razorbacks’ latest top 25 triumph came over Tennessee on Saturday in front of another packed house at Bud Walton Arena.

Among those in attendance was uncommitted 5-star prospect Anthony Black, and as you do when a recruit of that caliber comes to visit, Arkansas coach Eric Musselman did everything he could to spotlight the success stories stemming from Fayetteville in recent years. Several former players like Daniel Gafford and Isaiah Joe were in attendance, and Bobby Portis even brought the Larry O’Brien NBA Championship trophy with him. Musselman wore custom sneakers that featured the names of all the Razorback players currently playing in the NBA.

He also made sure those Pro Hogs were front and center by letting them call the starting lineup for the Hogs.

That’s not a new angle for recruiting, but it did sort of feel like shifting sands for Arkansas basketball fans.

For years, starting with the 2009 reunion of the 1994 national championship team, it seemed that whenever the Razorbacks needed a boost from the crowd, there would be some sort of celebration of the ’90s Hogs or even Eddie Sutton’s teams dating back to The Triplets. There was the celebration of all the Final Four teams in 2014 and the banner-hangings for Corliss Williamson and Sidney Moncrief. After an unofficial public campaign that went on for years, Arkansas acknowledged Nolan Richardson by finally naming the court for him (and tried to appease those of us calling for the return of Slobber-Hog to midcourt in the process).

“This is Arkansas basketball – we’re better than that!” some oldie would curmudgeon.

We all know how it played out. The Hogs beat Auburn. Fans stormed the court. Hunter Yurachek didn’t complain about the $250k fine from the SEC, in part because the storming possibly brought along at least that much in free publicity. Memorable images and video of the storming were plastered on national media outlets nationwide because when done well, a storming looks really cool.

It was certainly one of the most memorable moments in Razorback basketball. Even Richardson’s hallowed teams never defeated the top-ranked team in the country.

When Musselman wanted to build on that momentum and put a shine on the program for this weekend’s game against the Vols, it seems significant that the Razorbacks didn’t have to dip into the ’90s bag and hand out nostalgia pills to those of us who were fortunate enough to witness that era. He only had to look back a few years because Razorback basketball has been a successful, relevant, respected program for a while now. Indeed, Arkansas has won more games than any other SEC program since Musselman arrived in 2019, no small feat given how tough the conference has become.

The New Legacy of Arkansas Basketball

The Razorback basketball program may not have yet reached the Final Four and championship heights of previous eras, but fans who aren’t even college-age have seen plenty to be proud of in recent years.

Ever since Portis stepped on campus for his freshman season in 2013-14, Arkansas has made the postseason every year but once – and the Razorbacks will be there again this season. The program has a winning record in the NCAA Tournament in that time. Portis and Mason Jones won SEC Player of the Year (and you could argue Moses Moody should have won it as well). There are enough current Hogs in the NBA to cover a pair of shoes with their names, and the returning Arkansas basketball stars this weekend made it easy to discuss what a fantasy starting 5 would look like. (Michael Qualls was not in attendance, but he lived on the SportsCenter top-10 during his tenure, and the crowd reaction to his famous put-back dunk to beat Kentucky in 2014 made me think Arkansas fans would never storm the court…until they did so after the Auburn game.)

The Razorbacks have now won six of their last seven games against ranked teams and only three of those games were played at Bud Walton.

Hog fans of all ages have been witness to several memorable moments in recent years. The Razorbacks may or may not be “back” – however you choose to define that – but they are very much here.

The current Arkansas basketball team still has plenty left on the table to accomplish. One of the few remaining items Arkansas has on the list of “things we haven’t done since the 90s” is beat Florida in Gainesville (themselves coming off a victory over now second-ranked Auburn, and a court…not so much a storming but maybe a court-drizzling), and they’ll have the opportunity to scratch that off on Tuesday. From there, the annual Kentucky game will bring another frenzied crowd to Bud Walton, and later a couple more opportunities to move up the seeding lines before the SEC and NCAA Tournaments begin.

No doubt, Anthony Black would be a major coup for the program. He is, after all, a 6’7″ point guard magician who is also the last uncommitted McDonald’s All-American in the class of 2022. But whether or not Black chooses to sign with Arkansas in the coming weeks, the Razorbacks have already signed the most highly-anticipated signing class in recent memory. Five-star signee Jordan Walsh attended the game with Black on Saturday, and his presence and open recruiting of Black signals that Arkansas’ current success may not be about to fade very quickly. Especially if some of the current team’s stars return to play with the new class next season, no matter how this season ends, the expectations for next season will be fairly or unfairly immense.

The Vols victory showed that Razorback basketball doesn’t live in the ’90s anymore because it doesn’t have to. Thanks to Musselman, it hasn’t had to for a long while now.

More about what this success does for Arkansas recruiting at 11:40 here: