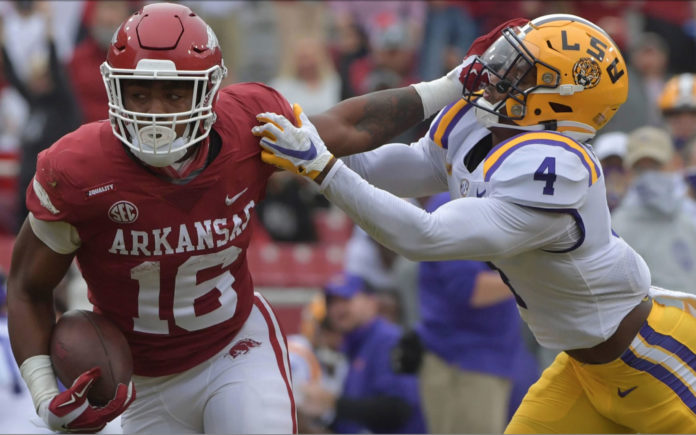 Today, Treylon Burks announced what 99.7% of clear-thinking Razorback fans have long expected he would do: declare for the 2022 NFL Draft. He went out the classy way, of course, as we all expected too.

“I have had many restless nights praying and talking with my family regarding this decision. With that being said I have decided to opt out of the bowl game and forego my senior season and declare for the NFL draft,” Burks Tweeted. “Other than representing my Lord and Savior Jesus Christ, there has been no greater honor in my life than representing Warren and the entire state of Arkansas these past three years.”

“I want to thank my grandparents and family for their guidance, Arkansas coaching staff for pouring themselves into me, and Shelby for always being there for me. To my teammates, my brothers, you have always been there for me, and your undying support means the world to me. Without y’all none of this would be possible.”

Then he saved the best for last: “Last but not last, to the amazing fans of this great state, I know no matter where I go in this world you will always be in my heart and I hope I will always be in yours. I may be leaving the state, but Arkansas will always be home and I will never stop calling those Hogs. God Bless and Go Hogs.”

Any sane Razorback fan would wish him well at this point.

Mid-first round NFL picks, as Burks is projected to be, are guaranteed around $15 million for their first contract. He’s already been blessed with mostly good health in three grueling seasons in the punishing SEC. Why risk injury when he already did what he had set out to accomplish – restore Arkansas football to a place of national relevance?

Unfortunately, fandom doesn’t necessarily produce the most sane people. That was abundantly clear this afternoon when an especially poor soul decided to call in to “Out of Bounds” on Buzz 103.7 FM with John Nabors and Joe Franklin:

“Quitting” is not something Burks did here. He stuck with the team through the whole season and did’t opt out with a few regular season games to go, as Rakeem Boyd did last year. He deserves nothing but support from fans as he decides to pursue his professional future. In contrast to this deranged caller, a lot of Arkansas football fans are actively cheering for him to go make his millions.

He played through various injuries all season long, putting his body and future on the line. While I’m selfish and wanted to see Burks just one last time in that cardinal and white, I understand he must do what is best for him and his career.

Watching him has been an absolute treat and evokes the same feelings as watching Darren McFadden or Kevin Kopps decimate their competition. Just as McFadden is the best to ever play for the Hogs at his position, and Kopps is at his, it’s time we recognize Burks as No. 1 too.

Case for Treylon Burks as Greatest Razorback Receiver Ever

When Arkansas football fans bring up the greatest wide receivers in the program’s history, the same names almost always come up. Younger fans will probably start off with Jarius Wright, Joe Adams and Greg Childs, while older fans will rattle off names like Chuck Dicus, Mike Reppond, Anthony Eubanks and Anthony Lucas.

After the historic season Arkansas football has had, the junior deserves far more than just being mentioned among other great receivers. He now deserves the title of Greatest of All-Time.

The star wideout from Warren had been one of the few bright spots for an Arkansas football team that was at rock bottom when he arrived in 2019. Despite the roller coaster the program has been on since then, Burks has consistently improved in each of his three seasons and has become the offense’s number one weapon.

Before the 2021 season, Saturday Down South’s Connor O’Gara, like so many other analysts outside of Arkansas, considered Burks to be the SEC’s top wide receiver. To Burks’ credit, he spent the entire season living up to the hype.

I mean, have you ever seen a 6-foot-3, 225-pound wide receiver do this to a Nick Saban-coached secondary?

In that same Alabama game, the recently awarded first team All-SEC selection was getting treatment in the injury tent on the Arkansas sidelines between possessions. This led to a rather funny comment about the injury tent from Sam Pittman following the game:

“I asked Dave (head athletic trainer), ‘Where’s Burks?’” Pittman said in his postgame press conference. “He said the (injury tent). I said, ‘Go get him. We’ve got to get him out of there. Bad stuff happens in there.’”

Following the win over Missouri two weeks ago, Burks was asked about playing through injuries this season and downplayed how much they have affected him.

“I mean I feel good enough to go out there and play, so I’m going to keep doing that,” Burks said.

If he isn’t 100%, it’s even more impressive that he’s able to do this to opposing defenders:

How Burks Compares to Other Arkansas Football Greats

It’s clear that Treylon Burks is an incredibly special talent. However, before this season his career numbers never really backed up how special he is.

While this season was his best, but it’s still important to understand the context to truly appreciate his talent. He’s played for two different head coaches (and one interim), caught passes from five different quarterbacks and played a shortened season in the middle of a pandemic.

Despite this, Treylon Burks has continued to put up numbers that are as good as any other receiver in program history. That’s clear through the below list, which shows how is numbers stack up to other Razorback greats through their first three seasons:

As you can see, Burks has clearly outperformed any receiver in program history through their first three seasons.

Every player on this list spent at least four seasons at Arkansas, so it would come as no surprise that guys like Anthony Lucas, Jarius Wright, Cobi Hamilton and Anthony Eubanks have slightly better stats over their entire Razorback careers.

Below is a list of what other great Razorback receivers have been able to do over their entire career, and where Burks falls among them.

As is evident from the above graphic, Treylon Burks has put up similar numbers in three seasons (including a shortened season) to what other great Razorback receivers put up in four seasons.

Coming into this season, I had written that two things needed to happen for Burks to cement his legacy as the “G.O.A.T.”

First, there had to be individual improvement from the 2020 season.

In 2020, Burks finished the year with 51 catches for 820 yards and seven touchdowns. Those numbers made him the No. 1 target of opposing defenses which, theoretically, might have slowed his production.

2021 was his best statistical season at Arkansas, finishing the regular season with 67 catches for 1,123 yards and 12 touchdowns.

But Did Treylon Burks Win Enough?

The second thing that needed to happen to make Burks’ case stronger was overall success for Arkansas football.

The one thing that great receivers like Chuck Dicus, Anthony Lucas, Jarius Wright and Joe Adams had over Burks was they were part of winning football teams. Winning is the whole point of football, after all. Regardless of how well an individual does, it is almost guaranteed to be overlooked if the program is struggling.

However, Hamilton, and his phenomenal 2012 season, is rarely mentioned because the Bobby Petrino scandal, John L. Smith’s miserable coaching tenure, and a lousy 4-8 season are all most fans remember.

Without a breakthrough, Burks’ legacy was headed on the same path as Hamilton’s coming into this season. The Chad Morris debacle was still fresh in the minds of everyone, and it had casted a large shadow over Burks’ individual talent and success.

Sam Pittman’s first year was a success, but if there wasn’t another step forward for the program this season then feelings across the fanbase would’ve probably changed.

Arkansas finished the season 8-4 (4-4 in SEC play), third in the SEC West, ranked No. 22 in the final College Football Playoff rankings of the regular season and won all three of their trophy games against Texas A&M, LSU and Missouri.

They’ll have a chance to add a fourth trophy this season at the Outback Bowl vs Penn State.

I had said that for Treylon Burks to truly establish himself among the best receivers in Arkansas football history, he was going to have to get some help from his team. If this season had been another three or four-win season, it likely wouldn’t matter how well Burks did, he would have been overshadowed in the history books by those receivers who were part of winning teams.

Instead, Burks was part of arguably the most impressive season Arkansas football has ever had.

The Legacy Treylon Burks Leaves Behind for Razorbacks

Yes, calling anyone the “greatest” at anything is usually an exercise fraught with extreme subjectivity. Players generations apart play in different times, under different rules, with different players. So, comparing what Chuck Dicus did in the late 1960s to what Treylon Burks did nearly 60 years later isn’t exactly apples-to-apples.

Prior to the season, when I made the claim that Burks could finish his career as the “greatest receiver in Arkansas history,” Mike Irwin of Pig Trail Nation echoed that same sentiment while stating that Burks lacked the numbers compared to others.

Mike is asked about my previous article at the 13:51 mark of the video below:

I agree that these types of claims can be very subjective, especially when you start comparing players across different eras.

However, Burks has the numbers now. He’s fifth in Arkansas history in yards receiving, and it only took him three seasons to do it. And he did it in a run-first offense. Those hard numbers should take away most of the subjectivity.

Treylon Burks and the 2022 NFL Draft

NFL.com’s Daniel Jeremiah compared Burks to former Ole Miss wide receiver A.J. Brown, who went in the second round and No.51 overall in the 2019 NFL Draft.

ESPN’s expert draft analyst Todd McShay had Burks listed as the No. 24 overall prospect in the 2022 NFL Draft, behind five other wide receivers, in his latest updated mock draft. That’s the same as projecting Burks to go in the late 1st round.

It should be noted that McShay’s mock draft was last updated the week before the Alabama game, so he could have Burks higher after an impressive final two games in his next mock draft.

In the same way fans know McFadden and Kopps are generational talents, few doubt that Treylon Burks is one of the greatest to ever step foot on the field at Donald W. Reynolds Razorback Stadium. Don’t just take my word for it. Take senior linebacker Bumper Pool’s.

“He’s the definition of greatness,” Pool said after the Missouri game. “He’s one of the greatest Hogs to put the jersey on, and I hope that everyone realizes that.”

Below is a really good breakdown of the specific skills that make Treylon Burks a potential high pick in the 2022 NFL Draft: