Search
Home Arkansas Football Razorback News How the 2021 Season Will Be Remembered in the Annals of Arkansas... 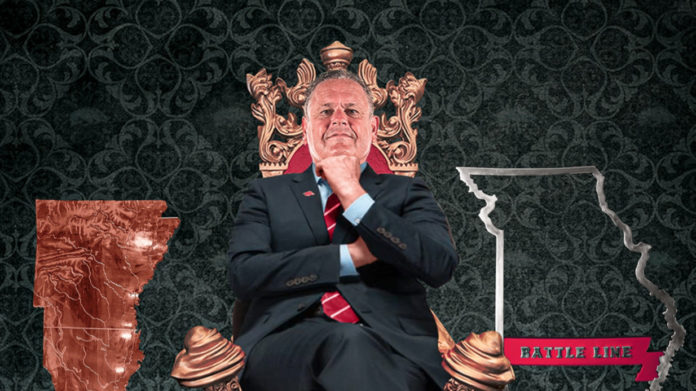 The year 2021 will not go down as the greatest season in Arkansas football history.

But, by golly, it will be remembered as one of the most impressive.

Arkansas capped an improbable regular season with a 34-17 win over Missouri on Friday night, lifting the Razorbacks to their best record since 2011. Under normal circumstances, with lots of other SEC teams, an 8-4 record is good. Fine. Satisfactory. At Arkansas, it’s almost beyond words.

When the clock hit zeroes on Friday the Razorbacks rushed to the northeast corner of Donald W. Reynolds Razorback Stadium toward the heaviest trophy of Arkansas’ three won this year. To them, though, it might as well have been a feather.

Arkansas is more than relevant now. It is a power. Sam Pittman and his team could carry the weight of Atlas’ globe at this point.

A team picked to finish sixth in the SEC West, coming off two-win, two-win and three-win seasons in the previous three years, somehow became the story of the SEC outside of Georgia. And they did it with a man running the show who had never been a head coach at the collegiate level before.

It’s the love and respect his players have for him, yes. But it’s also his pure coaching ability and the faith he has in coordinators. Consider Missouri had made Arkansas look mediocre, if not outright bad, during the first half Friday. The Tigers, whose head coach, Eli Drinkwitz, is from the state of Arkansas himself, had appeared to have the perfect defensive gameplan to slow Arkansas’ big-play offense.

But the Razorbacks ended the season the same way they began it: a second-half magic show.

A Big Key for Arkansas Football in 2021

Arkansas scored on four straight possessions to turn a four-point halftime lead to 27 early in the fourth quarter, much the way it turned a three-point deficit at the break into a 21-point victory over the Owls in the season opener. Such things don’t just happen because of talent. They require that talent to listen and adjust. And they require that talent to have a staff smart enough to coordinate that adjustment.

“At some point, you’ve got to go attack that and not sit there and say we’re afraid,” Pittman said. “We are a running team. We want to have success running. But if someone is going to take that away from you, you have to say we’re going to burn you deep. I thought (offensive coordinator Kendal) Briles and the offensive staff did a nice job of opening up the game plan.”

Arkansas finished with 425 yards of total offense, with KJ Jefferson getting 262 through the air and 58 more on the ground. His favorite target, wide receiver Treylon Burks, caught seven passes for 129 yards and a touchdown. Rocket Sanders added two scores on the ground, including one off a pitch from Burks, and Trelon Smith put up one more rushing.

Meanwhile, Arkansas’ other coordinator, defensive coordinator Barry Odom, made the Tigers one-dimensional. The former Missouri head coach, whose birthday was Friday, had seen his defense give up 27 points in the fourth quarter to Mizzou last year in the 50-48 loss. It wasn’t even close this go-around. Arkansas held Missouri to 316 yards of total offense and just 65 passing. That after giving up 559 through the air against Alabama the week before.

“I had the game ball and gave it to Grant Morgan and Joe Foucha and asked them to give it to Barry,” Pittman said. “(They) stood up and talked about what coach Odom means to them. Certainly gave him the game ball. He deserved it.”

He did, indeed. But only because head coaches don’t keep the game balls for themselves.

Time for Razorbacks to Go Bowling

Now, Pittman and the Razorbacks will wait, maybe nine days, or maybe only two days, to see where they will play in their first bowl since 2016. Thirteen weeks ago, such a sojourn would have been a modest victory, a next step in a rebuild most – perhaps even Pittman himself – thought would take longer than it has. At this point, with everything Arkansas has accomplished, a pall of disappointment would linger if it isn’t in January at the Outback or Citrus bowls.

Not that Sam Pittman would be the one to show such a feeling. The cool, collected Oklahoma native doesn’t do that. He turns 60 on Sunday and would take an invitation to a Florida-based bowl as a birthday present.

“Well, in the three-game losing streak we got beat by Georgia and everybody else that played them did, too,” Pittman said. “We lost to Ole Miss by one. I get it. Everybody thought the world was coming to an end.

“We came back, went on a run, obviously fell short at Alabama through Pine Bluff all the way to now. It just shows that we’ve got good kids that believe in their coaches. They understand effort, physicality and doing the right things.”

Things will be different after the bowl game. Arkansas may have exceeded its timetable in its return to relevance, but the expectation now will be for the Razorbacks to keep it.

If anyone can do it, Pittman can.