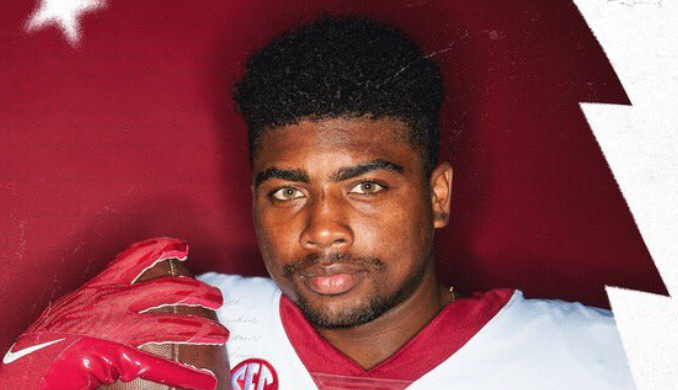 When Arkansas football fans bring up the greatest wide receivers in the program’s history, the same names almost always come up. Younger fans will probably start off with Jarius Wright, Joe Adams or Cobi Hamilton. Older fans, meanwhile, will rattle off names like Chuck Dicus, Mike Reppond and Anthony Lucas.

However, there is another name on the cusp of deserving mention. In fact, if the stars align in 2021, this young man will have made a very strong case to be dubbed the Greatest of All-Time when it comes to Arkansas football receivers.

That person is Treylon Burks.

The junior star wideout from Warren has been one of the few bright spots for an Arkansas football team that was at rock bottom when he arrived in 2019. Despite the roller coaster the program has been on since then, Burks has consistently improved in each of his two seasons and has become the offense’s number one weapon heading into this season.

Saturday Down South’s Connor O’Gara, like so many other analysts outside of Arkansas, consider Burks to be the SEC’s top wide receiver this season.

“At that size, he still managed to catch 17 passes of 20-plus yards downfield, which [Pro Football Focus] had charted as No. 10 among Power 5 receivers.”

Earlier this fall camp, Burks made an insane catch that showed he’s better than ever:

Since then, Burks has been held out for an undisclosed injury. But he should be ready to rock by the season opener vs Rice on September 4 or soon thereafter.

“I feel like they’re both going to be ready for Rice,” Pittman said on Thursday of Burks and punter Sam Loy.

“Let’s say this: I feel better about Treylon being ready for Rice than possibly I do Sam, but that would be the only two guys really that there would be some type of concern about.”

When looking at the numbers that Treylon Burks has been able to put up in his career so far, it’s important to understand the context to truly appreciate his talent. He’s played for two different head coaches (and one interim), caught passes from five different quarterbacks and played one season in the middle of a pandemic.

Despite this, his numbers put him squarely in the mix with all-time great receivers in Arkansas football history.

Below is a list of what other great Razorbacks receivers have been able to do in their first two seasons compared to Burks:

Treylon Burks averages more yards per game than the likes of Joe Adams, Anthony Eubanks, Cobi Hamilton and Jarius Wright. He has more touchdowns than Anthony Lucas and Mike Reppond. Even if Burks didn’t play another down, he would rank inside the top ten in career receiving yards.

But to become the owner of  “G.O.A.T”  status, two things needs to happen:

The first thing that needs to happen for Burks this upcoming season is that he needs get healthy, of course, and then make another leap in his production.

Below shows what other great Arkansas receivers were able to do after their first three seasons:

As is evident from the above graphic, all these former greats made significant leaps from their second season to third. Most notable was Anthony Lucas who added 43 receptions for 1,004 yards during the 1998 season when the Razorbacks blasted out of the gates with an 8-0 record under then first-year coach Houston Nutt.

While it may be harder for Burks this season since he’s going to be the focal point for opposing defenses, he is more than capable of putting up similar numbers. He has the advantage of playing with her former roommate in KJ Jefferson, and of playing with a beefed-up, deeper offensive line should provide more time for Jefferson to throw than Feleipe Franks had last year.

Even with a below-average statistical season, Burks will still finish with some of the most impressive career receiving numbers in program history. However, to earn the “G.O.A.T.” moniker, Burks needs another spectacular individual season.

The second thing that needs to happen this season is success for Arkansas football as a whole.

The Chad Morris debacle is still fresh in the minds of everyone, and it casts a large shadow over what Burks has been able to do. Sam Pittman’s first year was a success, but if there isn’t another step forward for the program this season then feelings across the fanbase will probably change.

For Treylon Burks to truly establish himself among the best receivers in Arkansas football history, he’s going to have to get some help from his team.

Regardless of Burks’ statistical output, a 6-6 or 7-5 season with a bowl game will help his legacy immensely. If 2021 produces another three or even a four-win season, it likely won’t matter how well Burks does — he’ll be overshadowed in the history books by those receivers who were part of winning teams.

This isn’t the first time an Arkansas wide receiver’s individual success and talent being overshadowed by a lack of team success. Think back to the spring of 2012, when Arkansas football’s expectation was national championship or bust.

Senior wide receiver Cobi Hamilton, who had spent his first three seasons behind Joe Adams, Greg Childs and Jarius Wright, was poised to have a breakout year as the clear number one target for star quarterback Tyler Wilson.

Everyone knows what happened next.

It took just two weeks for the season to unravel, then frustration and apathy quickly spread across the fanbase. What gets lost in the disappointment of that season is that Cobi Hamilton put together one of the best individual seasons in Arkansas football history.

Hamilton finished with 90 receptions for 1,335 yards, which are both single season records he still holds today. He set the record for receiving yards in a single game with 303 yards and 3 touchdowns in a loss to Rutgers, which was one of four games where he had at least 100 yards receiving.

Not only was this an impressive single season, but Hamilton’s career is deserving of more recognition than he’s received. He leads the program in career receptions, ranks third in career receiving yards and fifth in career touchdowns.

However, there is a reason Cobi Hamilton’s name doesn’t come up as often as other great receivers. Whether it’s fair or not, it can be attributed to the fact that many choose to forget about the 2012 season for all the negatives surrounding the program and lack of team success.

The same can be said for Treylon Burks’ career so far.

In Burks’ two seasons, he’s been a part of only five wins and 17 losses, including two of the most embarrassing losses in program history to San Jose State and Western Kentucky in 2019.

While Burks can’t control that, some of the Razorback fanbase can choose to forget about his performance because it can be painful to relive where the overall program was at the time. Just like it was with Hamilton, that hurts his legacy.

Now it’s very hard to see Arkansas football not taking a leap forward in 2021, and it’s just as hard to see Burks not taking a similar leap individually. The potential is there for this to be a very special season for the team, which would go a long way in determining Treylon Burks’ collegiate legacy.

Whatever happens this season, fans should appreciate seeing Burks suit up each week. Greatness only comes around so often, and he’s likely to enter the NFL Draft after this season. In fact, as you can see the video below, some consider him to be the top receiver in the upcoming draft.

Enjoy his talent while you still can.

Just as it was with tailback Darren McFadden in football and pitcher Kevin Kopps in baseball, we could soon witness the coronation of Razorback sports’ next “G.O.A.T.”