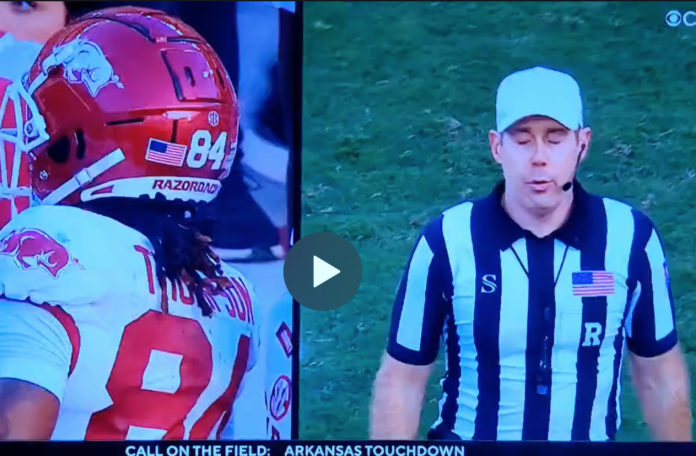 It was quite the uphill battle for the Arkansas Razorbacks against No. 2 Alabama today. They fought long and hard, but ultimately came up short 35-42 in a game that will go down as Treylon Burks’ finest after racking up 172 yards and two touchdown while sacrificing his already-injured body all night long — including on this last-gasp onside kick attempt:

The problem for the Razorbacks, though, was that they didn’t just have to play the Crimson Tide and their over-testosteronized cheap shot dispensers. Arkansas also had to compete against the referees. In the first half, the Hogs did manage to put up 14 points to Alabama’s 24 points, but those points did not come easy. Especially the second touchdown.

Three times at the end of a single drive, SEC referees tried to make sure that the Hogs would not score. They missed the right call on an intentional grounding and on a Warren Thompson touchdown. They almost missed a third call – a rushing touchdown – but finally decided to stop embarrassing themselves and signaled the score.

On all three calls, CBS’ officiating expert Gene Steratore sided with Arkansas and by the end was as baffled at the calls of the SEC referees and replay officials as Razorback fans were.

“Hell they aren’t even trying to hide the crap today,” longtime Razorbacks sportswriter Otis Kirk Tweeted. “This is beyond obvious. Pass those hats at the tailgates after the game and give it to the refs. Bonus money today in Tuscaloosa.”

“This is a joke,” agreed Bart Pohlman, producer for the Razorbacks’ Hog Pod and Bo Mattingly collaborator. “These guys aren’t qualified to ref a peewee game. The SEC should be embarrassed. Yet again.”

Longtime Arkansas sportswriter Jim Harris, who writes for this site, came flying off the top rope with this: “This dumbass crew and review don’t allow the TD and say that Thompson was down before the ball crossed. And then Thompson gets it over but this dumbass crew rules it short and will look at it.”

“Maybe the @SEC office will suspend me for criticizing this awfulness. TD Hogs.”

“Refs are gonna make sure Bama is in that SEC Title game come hell or high water,” as sports radio host John Nabors put it.

It doesn’t stop there, as the below Tweets show.

Razorback Media On SEC Referees in Arkansas vs Alabama

The duo put up some incredible numbers when considering the competition. Burks’ 179 receiving yards is the fourth-most allowed to a receiver in the Nick Saban era at Alabama.

“I think he’s probably beat up, but he just kept coming back,” Pittman said. “He won a lot of one-on-one matchups tonight, and KJ got the ball to him. He’s a tough, great player, but a better person. I’ll tell you what, he had a heck of a game tonight.”

Quarterback KJ Jefferson added that the Razorbacks made a concerted effort to get him the ball after doing a bad job of that the week before at LSU. “We both got in the film room and looked at the stuff we can correct,” Jefferson said. “Just me and him,1-on-1, on stuff we could do to help the offense move the ball down the field. Today I just gave him a chance, and he made plays.”

KJ Jefferson, meanwhile, racked up with third 300-yard passing game of the year with 326 yards, three touchdowns and no interceptions (and 22 yards on the ground).

Amazingly, Jefferson becomes on the second quarterback to complete at least 70 percent of his passes for 300-plus yards with three or more touchdowns and no interceptions against Alabama in the Saban era. The other? LSU’s Joe Burrow during his Heisman Trophy 2019 season.

“Perhaps most impressively, though, is how well the first-time starter has taken care of the football,” Hutchinson added on Hawgbeat.com. “After Saturday, he has now thrown 155 consecutive passes without an interception – the second-longest such streak in school history, behind only Tyler Wilson’s 184 in 2011.”

“That stretch dates back to the Hail Mary that was picked off as time expired in the first half at Ole Miss, so that wasn’t really a bad decision. Had that pass fallen incomplete, his streak would be at 219. Not only would that shatter the UA record, it’d be fifth in the SEC record book.”