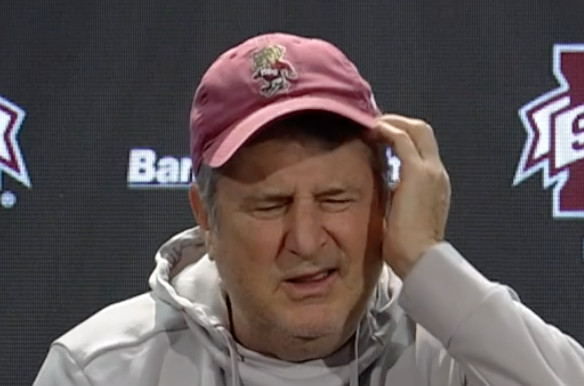 A little less than two years ago, in the weeks leading up to the hire of Sam Pittman, Razorbacks athletic director Hunter Yurachek interviewed a handful of candidates to be the next Arkansas football coach.

One of those candidates was Mike Leach, the man leading Mississippi State into Fayetteville for a pivotal 3 p.m. showdown on Saturday with the Hogs.  The Razorbacks are trying win their first game in Fayetteville against the Bulldogs since a 52-6 win in 2003.

This Mississippi State vs Arkansas showdown will be the first time Leach has visited the town where twice he sought out the head coaching job. “When I was at Kentucky, we played in Little Rock,” he said in a press conference this week. “I’ve always wanted to see it. I’ve been kind of on the Missouri side near Fayetteville, and it’s real pretty there and everything. I’m sure it’s a nice spot.”

The first time Leach threw his hat in the ring, albeit indirectly, came in late 2017 after the firing of Bret Bielema.

That story arrives, as these things so often do, from the mouth of grizzled Arkansas sportscasting veteran Mike Irwin. In a recent “Ask Mike” episode, Irwin talks about how he and Alyssa Orange, another Pig Trail Nation host, visited Leach’s former boss Hal Mumme in Starkville, Miss. years ago.

Mumme, who coached Kentucky with Leach as his offensive coordinator, was at the time on a recruiting trip as head coach of Belhaven in Jackson, Mississippi.

Since Orange knew Mumme, they all three had dinner together. “He told us that Leach was very, very interested in the Arkansas job,” Irwin recalled.

“He likes Arkansas’s fans. He liked their crowd and he really was looking to get out of Washington State.”

When Bielema was fired, during those tumultuous dark times when leadership was assumed by interim AD Julie Peoples Cromer, Irwin checked with Leach’s people.

“The word we got was, ‘Hey, he’s ready to come if they’ll talk to him and make him an offer.’ So I just passed that along to somebody in the athletic department. I didn’t say ‘Hire him’ or anything like that. I said, ‘Hey, I heard he’s interested.'”

Irwin added he later found out that Cromer et al didn’t even talk to Leach.

That allegedly made Leach “mad,” Irwin said, and he wasn’t so enthusiastic the next time the Arkansas football job came open after Chad Morris was fired in late 2019.

That time, the word Alyssa Orange got was he would still come to Fayetteville, “but it’s going to take some money this time.”

Yurachek, unlike his predecessors, did pay Leach the courtesy of an actual interview.

Barry Switzer, the former Razorback great, made a strong case for Leach on the Buzz 103.7 FM: “Mike Leach is a lawyer, he’s an attorney, he graduated law school at BYU, but he’s a great football coach, a great offensive football coach. Players want to be around a guy like that.”

Barry Switzer wasn’t the only one on the Leach-to-Arkansas bandwagon. More than a thousand fans signed a petition for Leach as next Arkansas football coach meant for Yurachek.

In a press conference this week, Leach gave this thoughts on the effectiveness of that petition. Click below to watch it:

Still, Switzer predicted that the Razorback brass would steer clear of Leach because “they’re scared of him, those guys usually don’t want a personality stronger than theirs. They’re going to hire somone beneath them.”

Instead, Yurachek and others did decide to pass on Leach, but it wasn’t because of fear, according to Mike Irwin. Apparently, Yurachek “was turned off by the fact that he wanted like $4 million or $4.5 million or whatever, so he didn’t get the job.”

The number is much more likely to have been $4.5 million given that Leach was already at that time making $4 million a year at Washington State. In the days after the interview, he was able to get Washington State to agree to an extension adding a fifth year to his contract, as well as a $750,000 retention bonus if he had stayed at Washington State through the 2020 football season.

He didn’t, of course. Leach soon afterward took the Mississippi State job, where he became the highest-paid coach in Bulldogs history with a 4-year, $20 million contract.

Yurachek then reportedly went to other top candidates on his list like Lane Kiffin. It didn’t work out with any of the marquee candidates, but that looks like it might have been for the best. Former Arkansas football players made the case for Sam Pittman, Yurachek listened, and the rest is history.

“I think Pittman was the best hire,” Irwin said. “I think he’s a better fit here than Mike Leach.”

Indeed, Yurachek has made it clear that one of the main criteria he’s looking for in a head coach is someone who understands Arkansas football culture and most importantly really wants the job. It’s hard to check those boxes off any better than Sam Pittman, who said he didn’t even look at the numbers on his $3 million-a-year contract before signing on the dotted line.

In retrospect, Leach was right to seek a payday. He earned it with two decades of head coaching at the Division I level. Pittman, however, didn’t have a single year of head coaching experience so he was also right to jump at the opportunity and not worry about money.

Yurachek appears to have done the right thing in passing on a higher-priced option for the better cultural fit who came at a bargain price. Nearly two years into their reigns, the coaches have nearly equal records (Pittman is 8-10 at Arkansas and Leach is 9-10 at Mississippi State).

While Leach never did directly coach Arkansas, his influence on the current Razorbacks is unmistakable through Hogs offensive coordinator Kendal Briles. Briles coached for years under his father, Art Briles, who was the running backs coach under Leach at Texas Tech from 2000 to 2002.

Earlier this week, broadcaster Tom Hart went onto “Hit That Line” to discuss how this Mississippi State squad has evolved from previous Mike Leach teams:

“It’s sixth of the nation in time of possession. This isn’t Mike Leach’s old air raid with Michael Crabtree or Graham Harrell or any of these guys. It is a dink and dunk, run the clock, take 12, 14 plays to score offense. It’s kind of like facing an old school wish bone – you give the ball up, you may not be getting it back for a little bit.”

“I’m curious, as a defensive coordinator [Barry Odom], which do you like better? Do you like that, or do you like the more explosive, we’re going to burn you and cross you with crossing routes, and we’re going to get man coverage on the outside and send Michael Crabtree down the sideline… I think Mississippi state certainly has momentum right now.”

Mike Irwin wants you to know his affection for Mike Leach doesn’t influence his support of Sam Pittman.

“Finally, somebody hires Mike Leach. He takes him to a bowl game every year that he’s there, which was like a decade.”

“And I’m thinking, ‘Okay, this is terrific.’ And what do they do? They fire him, because they’re stupid there….”

Watch him unleash this verbal fusillade in all its videographic glory here:

Speaking of Texas Tech, the Red Raiders are now looking for their fourth new head coach since firing Leach. See how that opening there could affect the Razorback coaching staff: