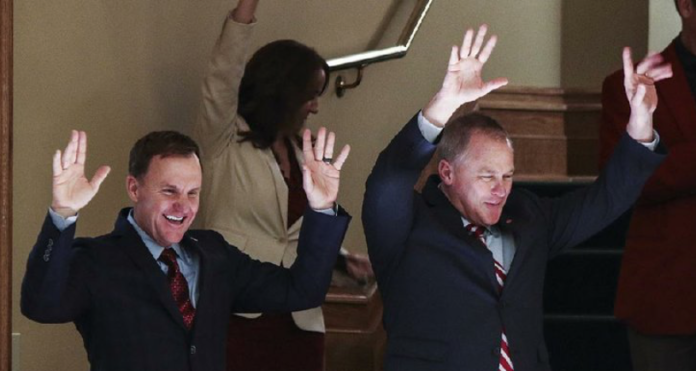 In the world of big-time college sports, the sausage making is often kept behind closed doors. How, exactly, boards of trustees and administrators make their career-defining coaching hires is almost always kept a secret from the fans.

Along with a nosediving football program, this closed-door policy was one of the reasons for Jeff Long’s ouster as the Razorbacks’ athletic director in 2017 after a decade on the job. In his place arrived Hunter Yurachek, who in some ways has proven to be Long’s opposite.

While Long seemed hesitant to embrace the tradition of playing annual football games in central Arkansas, Yurachek has publicly embraced it. And while Long never talked to other in-state athletic administrators, Yurachek has already agreed to games between the Razorbacks and UALR and UAPB. He’s also talking informally to A-State’s Terry Mohajir about scheduling competition between the Hogs and Red Wolves.

While Long did allow exclusive, behind-the-scene looks at the lives of former Hog coaches Mike Anderson and Bret Bielema [see the video below], he seemed more hesitant to allow insight into how things worked behind the curtain at the top of the Razorback food chain.

Man, could this guy bluster.

This isn’t the case with Hunter Yurachek.

Yurachek has hired former sports talk radio host Bo Mattingly to create an in-house podcast for the UA that deep dives into interesting and enlightening stories from current and former Hog players, coaches and administrators.

It’s a must listen, a fascinating, extended view into how the most tumultuous period in the history of the UA’s athletic staff played out.

Her navigation of the situation was especially unusual because she was in charge of the search for a new football coach after Bret Bielema was fired just days after Jeff Long. But, with no full-time AD yet on board, she couldn’t tell the prospects who they would be working for.

Chancellor Joseph Steinmetz was leading the hunt for the new athletic director. After Peoples told Steinmetz she had no interest in the full-time job, Steinmetz went with then-Houston athletic director Yurachek — someone who had no ties to the state and could bring in a fresh perspective. Once the Yurachek deal was close to being finalized, the first phone conversation between Peoples and Yurachek dived straight into the coaching search.

She listed all the coaching candidates and the range of compensation those coaches’ agents expected to be offered, then said: “But I think Chad is our guy. I think, you know, we’re leaning toward maybe making an offer. And he said ‘I like Chad Morris, I like that hire.'”

Then Yurachek told Peoples about how he had met Morris at a football camp at SMU that Yurachek’s son attended. Yurachek said: “I remember he made such an impression on us because Chad went through and met literally every parent at that camp and shook every hand [and talked to them]….I was really impressed by his commitment.”

Peoples also provided insight into why she tabbed Morris as the top candidate in the first place (over the likes of Gus Malzahn or Mike Norvell).

“The coaching candidate that we chose needed to have rebuilt somewhere else, needed to have the fortitude to come in and start from the ground up and to survive maybe a couple of really, really tough seasons,” she said.

“That’s not easy to do if you’re a very competitive individual, if you’ve always had success or if it’s been a while since you’ve been through that challenge. And so that was a differentiator in my mind. Somebody got to be strong enough to come back here and rebuild this.”

“I thought Texas was super important and when you went back and looked at our most successful Razorback teams, there were a lot of players from Texas. It makes sense, particularly with us being in the SEC now. So beyond X’s and O’s and recruiting presence and all that, there were a couple of things I thought were really unique to Arkansas that were differentiators.”

-Julia Peoples on why she targeted Chad Morris, then with SMU

Peoples added she liked how Morris had adapted and changed his tactics over the years to the direction that the game of football was heading. “Chad has evolved and changed in his philosophy and particularly in his game philosophy as needed. And so there were a couple of key points in his career when what had been working was no longer working. And then he went out and found the evolution of that, or in one case just completely sort of turned upside down what he was doing and was able to work his way through that.”

“I thought somebody with that skillset will be able to come in here cause I knew that it was going to be a little bit lean based on what we had seen with the previous group….”

“We had to find somebody who could go into high schools and small towns and Little Rock and then back up here in Northwest Arkansas and connect with everybody. Someone Arkansans could see parts of themselves in, you could relate to.”

This just scratches the surface of what Mattingly and Peoples cover. Listen to their entire interview here: