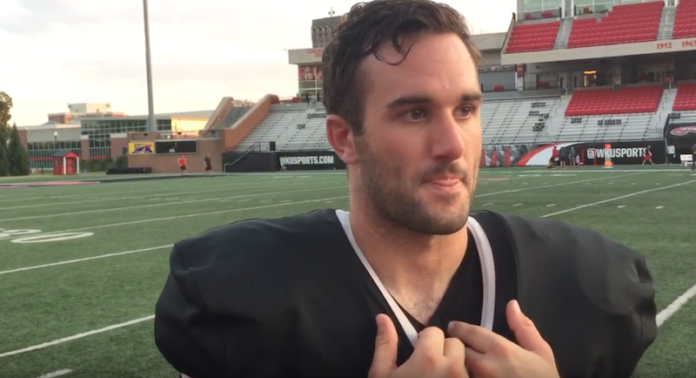 Former Razorback quarterback Ty Storey didn’t have the greatest offseason. When the Charleston, Ark. native chose to transfer to Western Kentucky this past winter, he no doubt believed he was a strong contender for the starting position this fall.

Things didn’t go as planned. Instead, Storey’s coach tabbed junior Steven Duncan (a Charleston, S.C. native) as the starting quarterback. Until now Storey has just been in one play — a flatlined rushing attempt inside the red zone at Florida International.

Duncan didn’t exactly set the world on fire, losing two of WKU’s first three games (including one to UCA), and in the last game he broke his foot. There’s no clear timetable on his return, but he’ll be out for at least “a few weeks” and up to most of the season, according to WKU head coach. “He’s out indefinitely and I’m planning for most of the season for him not being there,” Tyson Helton said.

As the top backup, Ty Storey is the frontrunner to replace Duncan. “I feel comfortable with play-calling and everything they put on the quarterback and I feel like I’m really in control out there,” Storey recently said. “In practice and fall camp, I always felt really in control of this offense.”

“I would be lying if I didn’t say it was tough. It was definitely some hard times, but I knew I might get my chance and I knew I had to stick with it, especially for these guys and everybody in case something did happen. I’m really happy to be here and ready to go.”

-Ty Storey on not winning the QB battle in fall camp

Western Kentucky visits Arkansas for a November 9 game. As the Hogs’ quarterback last season, Storey played in nine games and threw for 1,560 yards and 11 touchdowns with nine interceptions. He also ran for 187 yards and a touchdown in the two-win campaign.

Despite all the frustration that Storey and fans alike experienced last year, he should receive mostly positive reception from the crowd. Most Hog fans appreciate Storey’s efforts in the 2018 season, despite a new head coach, new system, subpar offensive line and slim pickings at the wide receiver position.

However, Duncan’t injury doesn’t necessarily mean that it is Storey’s team now. The third and fourth-stringers are players, too.

“Ty is kind of the obvious answer but I really like [Davis] Shanley and KT [Kevaris Thomas], so we’re going to leave it open and have the best plan for UAB,” Helton said.

““I am going to leave it open still for those guys to compete. We’ve got some time there,” Helton said. “The first thing I want to do is put the best 11 out there offensively that gives us a chance to win. It may not be a one-man deal, certain guys may have packages and we have to do a good job as coaches to have the right package for a guy.”

Western Kentucky will next take the field on September 28. Their opponent: the fearsome Blazers of UAB.

Want more coverage? Make sure to check out my latest Hogs football post below:

After WKU’s season opener, it looked like Ty Storey would get back into the game sooner than he has.

It was the second consecutive time UCA has beaten the Hilltoppers in Bowling Green, Ky. The first time game in the Bears’ previous trip in 2009 and resulted in a 28-7 whupping. Overall, this is the third victory UCA has ever scored against a Football Bowl Subdivision opponent. It’s lost 12 times*.

UCA overcame a 28-14 deficit to midway through the third quarter and put together scoring drives that covered 64 yards, 80 yards and 74 yards to pull off the upset.

Two defensive stands by the Bears, the final one with just 46 seconds remaining, sealed UCA’s win and likely gave Ty Storey hope of playing in WKU’s game against Florida International next week.

In the weeks preceding this game, Storey and Duncan were both ranked ahead of Arkansas’ top quarterbacks Ben Hicks and Nick Starkel by Pro Football Focus. While the Hog quarterbacks were tabbed at No. 102 nationally, the Western Kentucky quarterbacks go the oh-so-lofty No. 100 spot.

In the fourth quarter against UCA, Western Kentucky amassed 140 yards but no points. The Bears racked up 176 yards on just 12 plays.

“I thought our guys fought, they believed in our plan,’ said UCA head coach Nathan Brown, now in his second year. “Coach (Chad) Williams, Coach (Ken) Collums and Coach (Ryan) Howard, our coordinators, did a great job with their plans. Our players trusted them and that’s what it’s about in a big game like this against an FBS opponent. They’re a good football team. They’ve got a lot of good players, some really good length on the D-line.

“We had a lot of new faces that were having to learn on the fly,” Brown said, according to the UCA press release. “But man, what a great fourth quarter. And that’s something I told our guys… Last year’s team may have struggled and may have lost (the game), because we lost a lot of close ones in the fourth quarter. But I thought we learned from that and I think our guys paid attention to details and made plays when it mattered.’

The Bears, facing their second 14-point deficit of the night heading into the fourth quarter, cut the margin to 28-21 on the first play of the period when sophomore quarterback Breylin Smith hit sophomore receiver Lujuan Winningham with a 20-yard touchdown pass, his second of what would be three touchdown receptions on the night.

The Hilltoppers then missed a field goal after UCA’s defense held and the Bears pulled off a halfback pass from their own 20 yard line to tie the game. Senior running back Carlos Blackman found a wide open Lujuan Winningham in stride for 80 yards and a touchdown to make it 28-28 with 9:59 remaining.

Check out highlights of the win below. Sadly enough, UCA’s big win has scored a total of 0 up votes, to 2 down votes, so far.

A quick three-and-out for WKU gave the ball back to UCA at its own 26 with 8:53 left to play. Smith passed 38 yards to junior running back Kierre Crossley and 35 yards to Winningham down to the WKU 1. Blackman went in from there to give the Bears their first lead of the night at 35-28. UCA then turned to its defense, which recorded a pair of interceptions (Robert Rochelle, Duke Upshaw) but had to play the final three quarters without Upshaw, who was injured after his second career interception.

“I thought the fourth quarter, we believed,’ said Brown. “As soon as we got that game tied, then we got a big stop on the field goal, we knew we were going to take a shot with the halfback pass. Not ideal conditions to be backed up on your own (20), that’t not really where you script it to happen. But Coach Collums looked at me asked if I was good with it and I said let’s go get it. And obviously they bit on it and Lujuan was able to take it down and score.’

Winningham, a sophomore from Humble, Texas, finished with eight receptions for 222 yards and three touchdowns, all career highs. He caught 12 passes for 158 yards and one touchdown all of last season. True freshman Tyler Hudson added four receptions for 59 yards and another score.

“Just two amazing athletes, two young guys,’ said Brown. “Tyler and Lujuan made them hurt and Breylin put it where it needed to be. The offensive line gave protection when we needed protection most. We made plays.’

Besides Western Kentucky, the only other FBS opponent UCA has beaten is Arkansas State. Evidence of that 28-23 night in 2016 is below: