Search
Home Arkansas Football Around the SEC How the Coaching Dominoes Falling at LSU, TCU and Texas Tech Could... 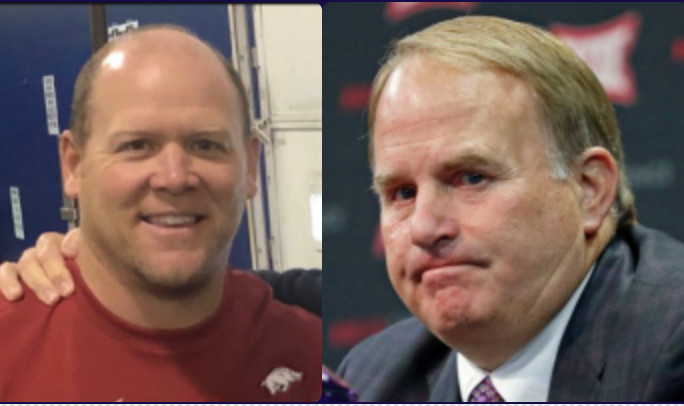 Modern day college football has very little patience for mediocre. The patience is so thin, athletic directors are no longer waiting for a season to run its course as several name brand universities have let coaches around midseason. All in an effort to be ready to pounce on their next great hire before a competitor all with hopes of returning to their former glory.

As Ricky Bobby once said, “If you ain’t first, you’re last”.

A little over halfway through the college football season has coaching vacancies at LSU, USC (the real one, in California), TCU and Texas Tech. All household names in college athletics with varying degrees of recent success on the gridiron.

LSU’s Ed Orgeron took the career path of former Auburn head coach Gene Chizik by winning the national championship only to be canned a short time later. Clay Helton at USC started hot then faded the past three seasons where a humiliating loss to Stanford was the last straw.

Who knew losing to Kansas State would be so influential to a coach’s fate? That’s not quite like losing to Vandy or a Chad Morris era Razorback team.

None of these guys were setting the world on fire in this 2021 season and all had foundations crumbling below their feet prior to this year. Orgeron and Helton got six seasons to take and keep their respective programs at the top of college football. Orgeron got it done with LSU but obviously caught lightning in a bottle in 2019 with loads of NFL level talent, a transfer QB and high quality assistants masking the ineptness that got him terminated at USC and Ole Miss.

Patterson, as previously mentioned, got 21 seasons and a statue of himself on campus. Wells lasted all of two and a half seasons before getting the axe. Coaches falling out of favor with disgruntled boosters, fans, athletic directors and most importantly recruits leads to quick trips to the unemployment offices nowadays, regardless of tenure or past success.

Some may argue they should be held to high standards given the outrageous salaries big time college coaches make and the ludicrous buyouts (see: Malzahn, Gustav Arthur) protecting them. A fair expectation indeed.

How This Could Affect the Razorbacks

The domino effect these job openings produce is mind boggling and Arkansas could definitely feel the pain. Nobody is coming after Sam Pittman. He’s stated numerous times this is his last coaching job and he’s staying as long as the University of Arkansas will have him. I truly believe that based on his character.

I also don’t believe defensive coordinator Barry Odom is a candidate for any of these head coaching jobs. Nor is offensive coordinator Kendal Briles. The only possibility in those five jobs is maybe Briles as a long, longshot at Texas Tech.

They like offensive football down there (and in that league) and he’s a Texas guy. Downside…no head coaching experience but Pittman has proven that shouldn’t be a hard and fast requirement. Briles is way down the list in Lubbock, but he’s apparently on the list.

The underlying concern for Arkansas with these type of job openings is which one comes calling for Odom to run their defense or Briles to bring his high-flying offense to town? Each of them would be very high on those lists despite Odom’s defense having an up and down season.

Briles has produced a consistent, entertaining offense both of his seasons in Fayetteville and that will be very attractive to each of these programs. Them staying at the University of Arkansas for another season and beyond is all dependent on who is hired at those schools, their philosophies and who they bring with them from their current staff or who they retain. Lots and lots of unknowns. Almost too many to even start worrying about that with four HUGE games and hopefully a bowl game left on the Razorbacks’s schedule.

The trickle-down impact of the previously mentioned coaching hires even comes into play if one of these hires nabs a coordinator or an assistant coach from another school and one of the Razorback assistants are courted to replace that person.

Is Barry Odom’s stock dropping as the Razorback defense struggles to defend SEC-caliber offenses? After an incredibly good start against lesser quarterbacks, the defense showed very little resistance to veteran signal callers Matt Corral and Bo Nix running or passing. Georgia just simply manhandled the smaller, less athletic Hog defense. Buying or selling on Odom could take dramatic shifts one way or the other with the remaining four games left on the schedule.

Next up is “The Pirate” Mike Leach and his quirky Air Raid offense. The Bulldog offense gave Kentucky fits last weekend dinking and dumping down the field with little resistance. Mississippi State is going to complete passes. No way around that. Tackling to the ground quickly and forcing some turnovers will be crucial. Odom can’t rely on last year’s game plan as Kentucky tried many of the same principles and got burned.

Odom has always done more with less at Missouri and now Arkansas. Could he be considered amongst the best in the game with higher level talent and depth? Probably. Arkansas’ lack of depth and talent has been exposed during the current SEC losing streak. Especially with star safety Jalen Catalon out for the season. The defense wasn’t the same with him playing injured and sure isn’t with him out. One star player makes that much difference at a school like Arkansas.

Returning to running his own program is also an option for Odom and Yurachek has even mentioned it in a recent press conference. Odds are that has to be just the right situation as he and Pittman are very close friends and at $1.75 million a year he’s paid handsomely for a coordinator at a lower-half SEC school. To me, Odom moving on is more “when” than “if.”

One could easily argue Briles’ stock is rising. He transformed Florida castoff Feleipe Franks into a very dependable SEC quarterback and now backup QB for the Atlanta Falcons. I don’t think anyone will argue KJ Jefferson, to this point, has been much better than we could have imagined.

Briles can really make himself a desirable target by a more successful program if the offense finishes the year like it has started. Multi-dimensional and creative offenses work, especially with four and five star talent that some schools with openings have.

Interestingly, UTSA Jeff Traylor’s name was bandied about for the Texas Tech job but he just signed a 10 year extension to his contract. So it doesn’t sound like the former Razorback assistant under Chad Morris is ready to move quite yet.

Traylor’s buyout year one is $7.5 million which is no big deal to a win-hungry Power 5 school. UTSA, which started playing D1 football in 2011, is sitting at 8-0 and ranked #16 in the Associated Press poll. He is and will continue to be a name frequently mentioned for Power 5 jobs if Traylor keeps that up with the Roadrunners. A school in Texas seems to be a logical fit given his long history of coaching Texas high school football and being an assistant at Texas and SMU.

As Traylor rises, how about the heat being turned up on Florida’s Dan Mullen and his surprising lack of success at Florida? Florida is a blah 4-4 and remarkable 2-7 in their last 9 games versus SEC schools. One of those wins was Vandy. Mullen is obviously feeling the pressure given his abrupt and odd answer to a reporter’s inquiry into how recruiting was going.

Naive Fans and some media looking for a story have roasted him as if he doesn’t recruit during the season. That couldn’t be more false. Mullen and his staff are recruiting actively as that is the lifeblood of any program and he said as much in a follow-up presser.

Now, whether Mullen can win at the level Florida expects…that is another matter. All four of the Gators’ regular season games are very winnable. Unless Mullen really slips up and loses one or more of those or says something really offensive, he should be back in Gainesville. With a much hotter seat.

The game within the game has started with all these midseason breakups between school and coach. Countless articles and tweets will mention who the leading candidate is for this job or that job between now and the start of spring football. Fans will be panicking about saving recruiting classes and dreaming of hires their respective school probably can’t get.

Everything is hypothetical until the LSU job is fulfilled as far as the big names in coaching are concerned. The last two coaches have been less than impressive but still won a national championship. That is how good that job is. I don’t forsee Lane Kiffin stiff arming LSU AD Scott Woodward if he comes calling.

Same to be said for Jimbo Fisher who has history with Woodward. Don’t believe all that coachspeak you hear in press conferences with all that “I’m happy where I am” and “I’m looking forward to building the program at _______”. LSU is that good of a job.

Regardless of who is hired where, plan on some shakeup on the Arkansas coaching staff. Head coaches are rarely caught off guard on these things and always have a shortlist of viable candidates to replace those that leave. Indeed, Pittman likely already has his next O.C. on staff with Dowell Loggains. That’s the nature of the business and nobody is immune to it.

And rest assured that there are plenty of up and coming assistant coaches that would scramble at the opportunity to work for Sam Pittman. His long standing reputation and how he manages people ensures that. I think it speaks volumes that coaches with the reputation of Odom and Briles took a job with Arkansas who was at the bottom of the barrel in the SEC at the time.

No doubt he would love to retain those two for so many reasons, for many seasons.

Just don’t count on it.

Danny West, a Razorbacks recruiting reporter, recently went onto the sports talk show “Halftime” and provided an interesting breakdown of the situation at Florida and its connection to Arkansas football:

“There’s a really bad trend going on in the state of Florida with the three power schools. Florida’s currently two [now three] spots behind Arkansas in … the composite rankings on 24/7 sports. That in and of itself is a huge issue. I’m sure they’re going to pass Arkansas.”

“They’re probably going to close on a couple of four star guys and finish strong, but to be sitting there in early November, two spots behind Arkansas, no disrespect to Arkansas, but this is the Florida Gators man. Their top committed guy from within the state of Florida right now is the number 20 player in the state. I think it’s 11 of the 19 in the state of Florida has already decided to commit to out of state schools.”

See our most recent piece here: