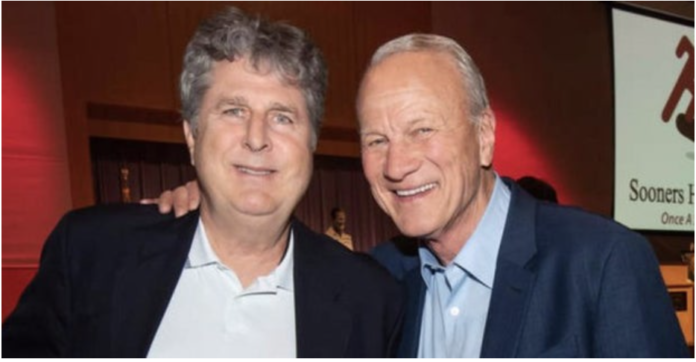 Mercifully, we’re now in the final days of the coaching search for the next Hogs football coach. Granted, nobody knows if that means that announcement will be made three, four or five days from now, but the general feeling/hope is that Hog fans will know who steers the ship very soon.

They need to. As do the players who deciding whether to return for the 2020 season, and the recruits who are debating whether to stick it out with the Hogs.

Barry Switzer, the Crossett native who became an Oklahoma Sooners and Dallas Cowboys coaching legend, has known Leach for decades. He recently made a rollicking five-minute case for Leach as the next Hogs coach on the Buzz 103.7 FM.

At 82 years old, Switzer’s way too old to cater to bigwigs 30 years his junior. He prefaced his defense of Leach by attacking the way non-athletic brass usually influence the biggest hire.

“People who hire football coaches —presidents, boards of regents — they’ve never covered a kickoff or ever brought one back…. Guys get hired by our football give dumbass contracts away, guaranteed contracts for 40 million dollars, paying so damn much money today and it’s just ridiculous.”

“Oh, they got people to country clubs, here and there, whispering ‘Oh they need to do this, need to do that.’ I promise you, it’s such a political influence on hiring any coaching position in the university community and I’ve seen it for years.” Then, about Leach, he fumed: “They’re scared of him, those guys usually don’t want a personality stronger than theirs. They’re going to hire somone beneath them.”

“Mike Leach is a lawyer, he’s an attorney, he graduated law school at BYU, but he’s a great football coach, a great offensive football coach. Players want to be around a guy like that.”

Granted, there are other candidates out there — namely Lane Kiffin — who also have strong personalities. It’s also likely Matt Campbell wouldn’t allow himself to get run over. But a key differentiator, in Switzer’s mind, is that Leach has 15-20 years more experience than either of those guys.

Leach’s track record of winning in hard-to-win places like Texas Tech is key when it comes to this next hire, he says. “I’m giving you what it takes for what’s not a very good program. You look at the schedule [Arkansas] has and they have four or five teams that will beat your butts every year because you don’t recruit better players. There are better towns who will recruit them. Too many players that have got to come along too far to get to Fayetteville, Arkansas, which is too hard to get to on the peripheral area of SEC.”

“Every quarterback, every receiver in the country knows what Leach does and has done, every program he’s been in. He’s taken programs that were .500 programs, second tier, second division in their leagues, and taken them to championships… Went to Washington State, in Pullman, Washington, I don’t know that you guys have ever been there before. If you can win in that league and go to bowl games, you’re a hell of a football couch, hell of a recruiter.“

-Barry Switzer, just going off in defense of Mike Leach

In his interview with Justin Acri and Wess Moore, Switzer also pointed out at at Texas Tech Leach mentored the current head coach of the Oklahoma Sooners’ powerhouse program.

“I know Mike, know him well, I’ve seen what he’s done and that’s the key — is that he’s done it, he’s proved it… [Lincoln] knocks on any quarterback’s door in the state he goes into, and they’re going to listen, they’ll invite him in. Mike Leach has the same thing happen for him because they know this guy… scores points, puts points on the board, has tremendous offensive deduction and has always proved it wherever he’s gone.”

Listen to the entire, glorious “interview” — in which Switzer doesn’t pause for a single question over the course of five full minutes — here:

Switzer’ not the only one coming out in defense of Leach to Arkansas, by the way. Kevin Sherrington, sports columnist for the Dallas Morning News, recently penned a piece on the topic.

So Yurachek reportedly has moved on to — yikes! — Lane Kiffin.

If you’re willing to take that kind of risk, Hunter, better to use it on a guy who gets results. The Pirate’s your man. He’d put the fun back in Fayetteville.”

But yes, Leach is an eccentric. This video proves that in full: