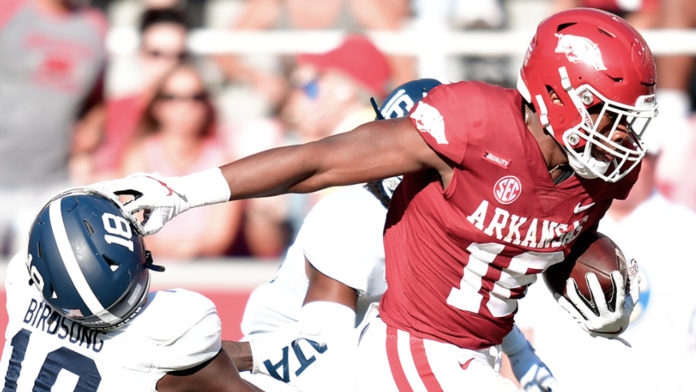 Fact: Treylon Burks is the best wide receiver at Arkansas.

Fact: Treylon Burks, frankly, is the best wide receiver in the SEC.

The first statement is undeniable. The 6-foot-3, 230-pound junior from Warren is a preseason All-SEC player. He led the Razorbacks in receptions, receiving yards and touchdowns last year.

The second statement is debatable, but a case can be made. Burks, between the combination of his statistics and his NFL Draft projection, few can compare.

The third statement is more of a future fact. A could-be, if you will.

After a relatively quiet start to the 2021 season, Treylon Burks finally had a Burks-like game in Arkansas’ 45-10 win over Georgia Southern on Saturday. He caught only three passes, but they went for 127 yards and included a 91-yard touchdown run*. Off a screen pass. Guys who are as big as he is aren’t supposed to be able to run nearly the entire length of the field without a defensive back catching them.

Yet there he went.

It’s possible he’s the most gifted receiver the Razorbacks have rostered in my lifetime.

And if he continues to trend upward next week, Arkansas very well could finally snap its nine-game losing streak to Texas A&M. In fact, the Razorbacks almost need Treylon Burks to be The Man to beat the Aggies.

Texas A&M was ranked No. 4 in the country last year when the two teams met. As of Saturday night, the Aggies were No. 7. It’s a negligible difference.

Texas A&M is just as good, so far, in 2021 as it was in 2020. They even will bring the nation’s No. 1 defense into Saturday’s 2:30 pm tilt on CBS, although a lot of that stat is due to the fact that the Aggies’ hardest opponent so far has been Colorado.

Arkansas is better in 2021 than it was in 2020 and the Hogs lost last year’s game by just 11 points. (And two years ago, they scored the “best loss” of the Chad Morris era by going toe-to-toe with the Aggies.)

In 2020, Burks had seven catches for 117 yards and two touchdowns in Arlington, Texas against the Aggies. A couple of weeks ago, it would have been hard to imagine him replicating those numbers this year against A&M.

His quarterback, KJ Jefferson, was atrocious in the first half against Rice. Burks, too, wasn’t good. He had five catches for 42 yards against Rice and two drops.

But nerves for the signal-caller and a lack of practice time for the wideout (who was hampered by an undisclosed injury in the week leading up to the opener) were largely to blame. Each improved in Week 2 and Arkansas upset then-No. 15 Texas.

On Saturday, against Georgia Southern, they each had their best overall games of the season.

Jefferson was 13 of 23 for 366 yards and three scores. This after he had just 266 yards combined against Rice and Texas. Burks had just 79 yards against the Owls and Longhorns. Now they look like the best two players (sorry, Tyson Morris, you’re up there, too) on the offense.

Jefferson was angling that way, anyway, despite the pedestrian passing numbers. He was second on the team with 162 yards rushing and two ground scores going into the Georgia Southern game. His effort Saturday, however, shows Arkansas has more than just the top-15 rushing attack in FBS.

Texas A&M fell from No. 5 to No. 7 in last week’s AP Poll because of a less-than-impressive 10-7 win against Colorado. The Aggies were awful stopping the run through two weeks, giving up 198.5 yards a game to rank 109th in the 130-team FBS. But against Arkansas, you could have bet on an A&M defense that would stack the box, perhaps double-team Burks on the outside and force an occasionally erratic Jefferson to throw.

The Aggies simply cannot do that anymore. Certainly they bounced back Saturday, beating New Mexico. But that’s a Lobos team that was picked dead last in the Mountain West. Of course, the same could be said for Arkansas’ shellacking of mid-pack, at best, Sun Belt foe Georgia Southern, but the Hogs didn’t struggle in Week 2, either.

Make no mistake, Jefferson isn’t “there” yet. More than a few of his passes went funky against the Eagles, often too low or too high. And offensive coordinator Kendal Briles was able to build in screens to up his quarterback’s confidence. Texas A&M isn’t Georgia Southern on defense, no matter how mediocre its numbers may be through three weeks.

Still, Saturday showed what Jefferson can be. When the cogs are clicking, Arkansas’ stable of four solid running backs and Jefferson’s legs provide five different looks running the ball. Jefferson’s arm – and Burks’ dynamism – now ensure that stacking eight in the box is a bad play. Arkansas will have to capitalize on its showings so far.

Texas A&M can score. Isaiah Spiller is perhaps the best running back in the nation. Quarterback Zach Calzada will be more comfortable now, too, after his touchdown against Colorado proved the game-winner and his three scores against New Mexico were a confidence builder. The Aggies also have two players who are projected first-round NFL picks on the defensive and offensive line, too.

The Texas A&M vs Arkansas football matchup has been a high-scoring one between the two old Southwest Conference rivals since the resumption of the rivalry. The lowest combined point total in the 12 consecutive meetings since 2009 is 41 points. The average total? Try 65 points.

Arkansas has shown in 2021 it isn’t afraid of a shootout. The Hogs are averaging more than 39 points a game. They were at 39 exactly before Jefferson and Burks came untracked against the Eagles. “The sky’s the limit” is a hackneyed phrase, but is it wrong in this context?

Not with Burks at the ready. There’s a reason for all the hype surrounding him. He may not be the reason Arkansas wins (or loses) against Texas A&M. A closing-seconds touchdown or field goal – which wouldn’t be a surprise in this close series recently – would get the pub. But you can count on Treylon Burks’ presence, or lack thereof, being perhaps the biggest overall reason for either outcome.

Simply put, Burks is unlike any player Arkansas has fielded in a generation. And now, after Saturday, he’s able to show the college football world outside the Natural State why.

KJ Jefferson on the 91-yard touchdown pass: “Coach [Kendal] Briles was like, ‘If we get this look, we’re going to run it right here and just get the ball to him in space.”

“The main thing was I went out there, looked at the defense, saw we were getting nickel pressure, so I flipped it out to him and it was two-on-two blocking. He had to make the safety miss and that’s what he did.”

Treylon Burks: “Honestly, before, I had already told [Blake] Kern … if he makes his block, it’s a touchdown. Before we ever went out there, it was a touchdown.”

Treylon Burks on having 37 yards receiving vs Texas while the team ran for 333 yards:

“Honestly, I really don’t care if I get the ball at all,” he said. “I just want to win. I know the team wants to win, so as long as we get a dub, we get a win, I’m perfectly fine.”

*Second-longest touchdown pass to a Razorback wide receiver ever. The first was Matt Jones’ 92-yarder to Richard Smith in 2002 at Tennessee when the Vols beat Arkansas 41-38 in six overtimes.

See how Burks stacks up against other all-time Arkansas football greats here: