Search
Home Arkansas Basketball Perspective What Should Keep Jaylin Williams from Making a No-Brainer Bounce to the... 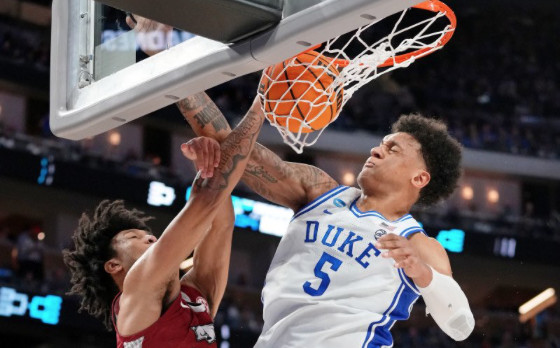 The first week and a half after Arkansas’ NCAA Tournament defeat at the hands of Duke in the Elite Eight yielded much news on the player personnel front. Not much of it was too important, at least when it comes to the transfer portal.

Arkansas basketball coach Eric Musselman will bring the No. 2-ranked recruiting class in the country this summer (No. 2, by the way, to Duke’s No. 1. Not that that matters). Two of the class’ signees are largely expected to be one-and-done players in guard Nick Smith and wing Jordan Walsh. Smith is even projected by some to be a top-five pick in the 2023 NBA draft.

After that, though, things get scary. The only major contributor from the Elite Eight team who is all-but-guaranteed to return is guard Devo Davis. JD Notae has left to play professional basketball in the United States, and Au’Diese Toney may join him. Starting out, it won’t be at the NBA level for either Razorback. Starting salaries in the G-League are $35,000/year.

No one else to consider?

Or, as this writer prefers to call him: The Most Important Player If Not The Best Player On The Team. But that’s a bit cumbersome, I guess. On Monday, Williams announced he will go through the NBA Draft process but won’t hire an agent. This lets him keep his college eligibility while “going through the interviews, gathering feedback and building relationships with NBA coaches and front office personnel,” he said in a release.

“My gratitude to Coach Musselman and the staff goes beyond words for helping me be in this position,” he continued.

“I will keep all my options open and, after going through the process and talking with my family, my support group and the Arkansas coaching staff, I will make an informed decision when the appropriate time comes.”

It may be almost two more months before Arkansas basketball know what Jaylin Williams will enter the 2022 NBA Draft on June 23 or not. He has until June 1 to withdraw his name and return to school. Until then, Williams will likely participate in the draft combine, scheduled for May 16-22, without losing his eligibility.

Jaylin Williams and the 2022 NBA Draft

Expect Williams to ultimately return to Fayetteville for the 2022-23 season. Still, it’s a testament to his hard work and rapid growth that it could realistically be Chicago or Charlotte or Denver or Dallas or some other big NBA city. The 6-foot-10 big man drew the attention of the NBA in the last three months of the season when he changed his game for the Razorbacks, going from averaging 6.8 points, 6.4 rebounds and 3.6 assists in the team’s first 13 games to an average of 13.7 points and 10.6 rebounds since then.

Jaylin Williams went from a pass-first, charge-taking big man who could rebound well to a double-double machine with point-forward IQ.

From January 4 to last weekend’s fall at Duke, the sophomore played in 24 games. He had double-digit points and rebounds in 15 of them, including all four games in the NCAA Tournament. He also continued to establish himself as the SEC’s best passing big man, as you can see in these highlights:

The best college basketball players aren’t always the ones who go high in the NBA draft, of course, as the league values projection and skill-set more than output. And despite his output, the key phrase in the paragraph above is “drew the attention.”

It isn’t that Williams was completely off the radar for NBA teams entering the season – he came to Arkansas as a Top 50 recruit in his class, after all – but for the first year and semester of his career with Arkansas, he was a role player. At this point, Williams doesn’t appear as too big of a threat to crack the first round of the 2022 NBA Draft, though. ESPN’s Jonathan Givony and Mike Schmitz have Williams going at No. 45 overall (second round), and Sam Vecenie of The Athletic places him at No. 35, which is early second round.

Thus, the likelihood he’ll be back at Bud Walton Arena this winter.

The NBA’s loss is Arkansas’ gain. What the Hogs would like to see from Williams, especially now that JD Notae has declared for the draft, is the same thing the professional ranks would like to see. For one, he can make sure he preserves his body for the next decade of playing basketball.

Williams finished with 54 charges taken over 37 games this past season, and as great as that was for the team as a whole, that amount of force absorbed is not the best in the NBA. “We’ve had a postseason meeting already,” Eric Musselman recently told The Field of 68. “One of the things I did say was, ‘If you come back, we’ve got to stop taking all of these charges, because the NBA game is more verticality.'”

Over an 82-game NBA schedule, it’s impossible for mere mortals to keep up that same frequency of charges taken without suffering injuries of some sort.

“Hey, just go vertical because of the pounding your body takes,” Musselman said. “Certainly with Jaylin that’s something — if he came back, when he comes back potentially — we’re going to want to not take so many charges, go vertical more to try to save his body.”

This means, if Jaylin Williams comes back, we should see fewer charges taken and more blocked shots. Last season, his 41 blocks were the fewest by a Razorback single-season leader since Hunter Mickelson had 39 in 2012-13, the Arkansas Democrat-Gazette’s Scottie Bordelon points out.

Outside of tweaking his defensive style, the Fort Smith native can help both the Hogs and his NBA stock by making getting quicker. “He has so many of the skills that NBA teams are interested in from their bigs,” NBA Draft analyst Sam Vecenie wrote. “The only issue is whether or not he’s athletic enough to do it all at the NBA level. He could stand to lean out and get into better shape. If he did that, it might add to his ability to protect the rim. Right now, Williams gets by largely with positioning and ability to take charges.”

There at least a couple of skill areas where Williams can also get better:

Where Jaylin Williams Can Improve for Razorbacks

Williams shot 17 of 71 from 3-point range as a sophomore. The percentage comes out to .239, or just enough to be dangerous, but not enough to be scary on a consistent level. Traditionalists might suggest that’s fine, that big men don’t need to be great 3-point shooters. But the sport has changed so much in the last 10-20 years that a big who can’t shoot from beyond the arc isn’t likely to be much of a game-changer.

Those players exist, but they’re rare. Utah Jazz center Rudy Gobert is a unicorn in a league filled with 6-foot-11 Nikola Jokic (34% 3-point shooting) and 7-footer Joel Embiid (37% 3-point shooting). If Williams were to get to the 30% mark with Arkansas next year – or had he done it this year – the NBA would be the logical next step.

As solid a secondary scorer as Williams became as the year progressed, he was not the most efficient on the offensive end. In the NCAA Tournament, he shot just 46% from the floor on two-pointers, even though he possesses a strong floater game as this clip shows:

At 6-foot-10, he can play center and predominantly in the paint, but centers generally shoot closer to 60% on 2s than 45% on 2s. If the NBA thinks of Williams as a stretch-four, not only would the 3-point shooting likely have to improve, so would his ability to take defenders off the dribble and convert around the rim.

For a point of reference, let’s look at Williams’ contemporaries. Auburn’s 6-foot-10 forward Jabari Smith is largely expected to in the top three picks in the draft, if not the No. 1 overall. The freshman shot 43% from 3-point range, averaged more points than Williams and has a slimmer build and younger age. LSU’s Tari Eason is a touch smaller at 6-foot-8 and would never play center in the NBA. But he’s a stretch-four, big-three who can put the ball on the floor and also shot 38% from range.

Williams’ best comparison among those expected to go in the first round of the NBA draft is Jeremy Sochan, Baylor’s 6-foot-9 freshman big, who played center for the Bears this year. He only started one game for Baylor and averaged 9.4 points and 6.4 rebounds. He isn’t much of a perimeter player, either, shooting just 30% from deep.

Yet Sochan is the projected No. 9 pick in the draft by Vecenie, largely because he can handle the ball on the perimeter, run a point-forward spot and defend four positions. Sound familiar? The biggest difference between Sochan and Williams is the former’s ability to put the ball on the floor and score at the bucket. There is little doubt Williams could be another Sochan…if he waits.

Zero of this is meant to take away from Williams’ game. After all, I already consider him the best, if not most important, player for the Hogs this year. It’s only to show what NBA teams already know: he has areas to improve. There’s no doubt he already knows – it just helps to hear it directly from NBA personnel, as will in the coming weeks. And that’s good news for Arkansas basketball. The return of a player who is close to becoming a full-fledged NBA prospect would go a long way in the Razorbacks making another deep run in the NCAA Tournament.

“Williams does bring is tremendous toughness on both ends of the floor, a trait that will help carve a place in the NBA,” Givony wrote.

And for Williams, taking the aforementioned next steps could not only produce such a postseason push with the Hogs, but also a few million more salary dollars when the 2023 NBA draft rolls around. The draft is something he can more easily delay as Arkansas’ face of the program and the accompanying NIL money that could come with being such a star.

More on Jaylin Williams and the 2022 NBA Draft: