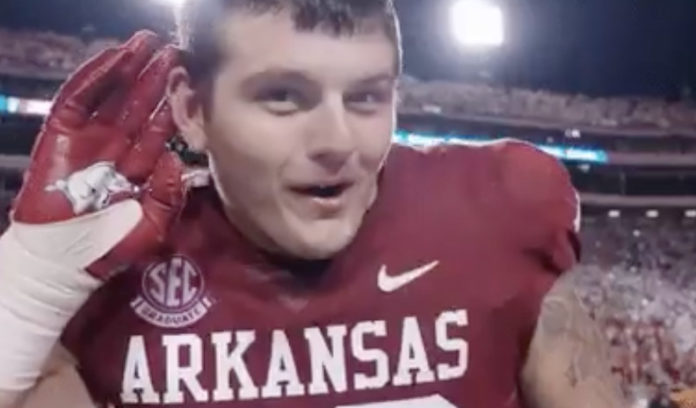 Depending on one’s employ, one may or may not be familiar with this particular combination of letters, numbers and punctuation marks:

I believe those who follow college sports passionately will surely know what that means within the next 10 years. For now, for the uninitiated, 501(c)(3) is the specific tax code for nonprofit organizations. Such organizations are exempt from federal taxation.

Happy Kuykendahl, the villain of the 1994 college basketball film “Blue Chips,” is now real and operating in the open. In that Ron Shelton picture about college basketball recruiting and shady donors supplying high-school players with cash and prize to attend the school of choice, it’s JT Walsh’s Kuykendahl who serves as the malevolent face of the ruining of amateur athletics.

Only, he isn’t a villain anymore. Viewed through the lens of 2020-21, Happy is a benefactor. Freed from the constraints of under-the-table money to recruits, Happy would now be able to simply sign favorite athletes of his from his school to a name-image-likeness deal and put the dollars directly in the players’ hands.

And to be perfectly clear, this is a good thing. Great, even. Players deserve monetary compensation for their work. By signing an NIL deal for a 501(c)(3), the player can receive the funds, continue playing the sport he or she loves, have everything be on the level and help the cause of their choice all at the same time.

A New Day for NIL and Razorbacks

Arkansas has its first now. Bryan and Mandy Hunt, the son and daughter-in-law of Johnelle and J.B. Hunt, founders of J.B. Hunt Transport Services in Lowell, announced the establishment of Athlete Advocate Consortium, a nonprofit aimed to help athletes by “making a positive impact on the local community.”

Razorbacks guard JD Notae was the first to sign with AAC. He selected Samaritan Community center, an NWA nonprofit providing food and resources to families in need.

“I’ve always felt like if I was ever in the position to help another family who needs a little help making sure their kids get good meals I would,” Notae said in the release. “AAC has given me the opportunity to put the spotlight on Samaritan Community Center so all the members of our community can see the good work they do and learn about the ways they can help.”

It’s worth reiterating: this is outstanding.

It also changes the game, quite literally, even further.

The state of Arkansas, and accordingly, the University of Arkansas as the state’s flagship school, are blessed to have a number of Fortune 500 companies in the immediate vicinity. Those kinds of relationships could, in turn, benefit the Razorbacks’ athletic programs and players with NIL deals.

Teams without such prestigious friends of the program won’t be as lucky. Money is there to be had for college athletes. And for now, while the iron is hot, NIL deals and the mega collectives are the rage of college athletics. Those collectives basically function as start-up companies whose primary aim appears to be the signing of athletes to NIL deals.

The question, however, is whether it’s a lot of bluster for nothing. It appears it could be.

According to CBS Sports’ Dennis Dodd, who talked to founder and CEO of INFLCR Jim Cavale, only about 1,000 of the 480,000 Division I athletes across all sports will make five figures through their NIL deal. Only about 10 of those 1,000 will reach six figures. So, in theory, one in 48 will get year-changing money and one in 480 will get life-changing money.

The terms of Notae’s financial deal have not been disclosed, for the record, but Bryan Hunt explained more in a recent interview: “JD is not making a significant amount of money for this. I mean, it’s not a life changing dollar amount for JD and certainly nothing what he’s capable of and potentially doing.”

Is a culmination of these relative small peanuts enough to drastically alter the college sports landscape? About 159 Arkansas athletes had NIL agreements as of the data collected by Talk Business and Politics, which focuses on such news in the state of Arkansas. Those 159 athletes come from 19 sports, meaning while football and basketball may get the most and biggest deals, it’s hardly exclusive to the revenue-generating sports.

For a third time: This is a great thing.

At the University of Texas, one of the 501(c)(3) collectives, an organization called Horns With Heart, will give up $800,000 to the Longhorns’ offensive linemen starting in 2022. Each lineman gets $50,000 a year. Starters don’t make any more than reserves, it appears. Texas has the largest and most affluent alumni base of any school in the nation. Days after Horns With Heart was announced, the Longhorns gained a pair of highly-sought offensive line commitments.

Needless to say, it drew some sideways glances.

“Hard to see the charitable purpose when the unifying feature is paying athletes for sponsor deals,” Brian Mittendorf, an accounting professor at Ohio State who focuses on nonprofits told the Associated Press. “It’s certainly a unique take on NIL arrangements. The way it’s packaged, it comes across more as a way to support the athletes as opposed to a way to achieve a charitable objective.”

Six of one, half a dozen of the other as far as the proponents are concerned. No NCAA rules have been broken. Notae, for example, if already serving as the face of the AAC.

Following in Footsteps of Texas Football

The Arkansas football program just hired an accomplished new defensive line coach in Deke Adams. Adams has coached six NFL draft selections since 2013, but the cupboard’s looking pretty bare in Fayetteville these days after the entire starting front three — Tre Williams, John Ridgeway and Markell Utsey — left. As AAC has entered the chat, so to speak, it’s not inconceivable they, or another similar organization, could create something similar to Horns With Heart in hopes – the program’s hopes, that is – that players of a certain positional unit will commit to the Hogs.

Much like the madness that was conference realignment a decade ago, this, too, will eventually become so commonplace that the hub-bub will be second nature. When Oklahoma and Texas decided to bolt from the Big 12 to the SEC, it was big news. But it was something everyone had already seen before and few were surprised. Accordingly, with NILs and collectives, it won’t be long until they’re the standard, not some new, wacky phenomenon everyone is scrambling to come to grips with.

The good news for Arkansas fans, at least, is the potential for permanent program building. Organizations like the AAC should not only help attract new, better recruits, but keep some of them from transferring to perceived greener grasses once there are in Fayetteville.

Pig Trail Nation’s Alyssa Orange sat down with Bryan and Mandy Hunt to discuss why they started the Athlete Advocate Consortium. Here are some interesting excerpts:

On how JD Notae came to be involved:

Mandy Hunt: I love to get to know the players and what their story is. Where did they come from, why are they here? So when I have that opportunity and I basically make that opportunity happen for myself. At the games or on the court, on the field, or if I see him in public, I’m not afraid just to stop him and talk to him. I just have this passion and I just want to bring the right athlete into our home and into our NIL that we have started.

So when Bryan had his idea of, ‘I’m going to go with the Samaritan House, who do you think we should [involve]?’ And I had been just praying about JD and he had just really been on my heart. I was like, ‘I’ve got the athlete and it’s JD.'”

How they arranged things with JD:

“Though a mutual friend, who was also JD’s attorney, we reached out to him and said, “Hey, here’s what we want to try to do.” He was just as confused as we were. It was like, “Okay. So yeah, I understand it, but how does it work?” And we’re like, “We don’t know. You help us put it together.” So our friend, Brandon, he brought JD over and we had a wonderful dinner. And you figure out real quick, this is going to work. So then we sprung it on him and JD was just immediately, “Oh, yeah, I’d love to be a part of that.

Accounting service that the AAC provides:

“The first service we provided was the other night during a dinner. I looked at all of them and say, ‘Now, did everybody pay in their quarterly taxes to date?’ And I didn’t get very many responses of yes. I said, ‘That’s okay. It’s your first year as a tax owner. You actually have until the first quarter of 2022 and I’ll keep that date in mind too.’”

“So it’s obvious that while they are enjoying the aspects of making their own income, they’ve got to learn the responsibilities. And keep in mind, the University of Arkansas has done everything they can to help them. They just weren’t thinking about that at that time. So what we do is we have accounting people that can help them.”

Make sure to watch the interview here:

For our latest post on Arkansas football, see here: