Search
Home Arkansas Basketball Around the SEC Mizzou Fans Will Rue Trevon Brazile’s Transfer to Arkansas Even More After... 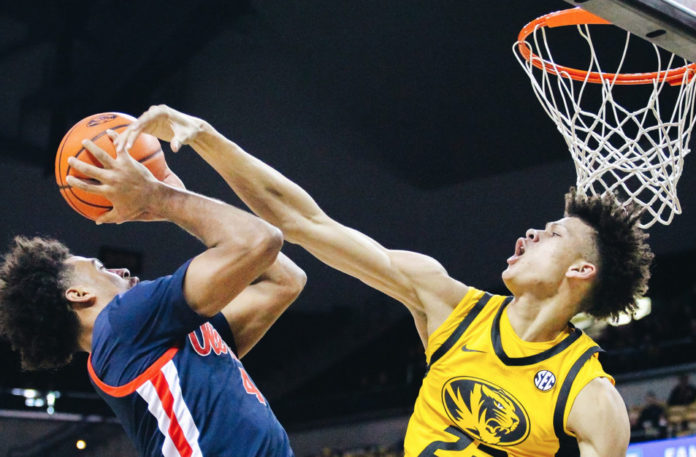 Transfer season is starting to heat up and, to nobody’s surprise, Arkansas basketball coach Eric Musselman is already making a splash with today’s announcement that 6’9″ 215 pound forward Trevon Brazile will leave Mizzou for the Hogs.

As a true freshman, Brazile was the No. 3 shot blocker in the SEC last season averaging 1.9 blocks per game. He also averaged 6.6 points and 5.1 rebounds and committed on Wednesday during a visit.

“I’m pretty excited,” Brazile told 247Sports. “I just went for an unofficial visit and had a great visit and decided that’s what’s best for me.” He especially like what Arkansas basketball staff is putting together and how his rim-running and protective abilities could fit in.

“I think what stood out was their attention to detail and how they prepare,” Brazile added. “I just noticed how deep into detail they went and I could feel the competitive spirit they had and that they they want to win.”

Brazile is a late bloomer who was a three-star recruit and didn’t get his first high major offer until September 2020 (from former Missouri basketball coach Cuonzo Martin). He has since grown a couple of inches and transitioned from a big guard to a power forward/small-ball center. Brazile started this past season with Missouri with a tendency to play out on the perimeter too much, but still had a few standout moments, including blocking the shot of Illinois All-American Kofi Cockburn multiple times.

By the end of the year, Trevon Brazile bulked up more than 25 pounds and became more comfortable playing inside. In the last few months, his high potential has become clear. ““All he wants to do is be a good basketball player and be a part of a team,” Martin said of Brazile in February. “Once in his mind he truly realizes that he’s one of the best out there, you’ll see next level.”

That upside came through clear and loud in a recent ranking of all available college basketball transfers and unsigned high school recruits by The Athletic’s Sam Vecenie. Vecenie dubbed Brazile the top-rated transfer big man on the market, giving him the overall No. 8 rating. That, by the way, is three ahead of the 6’11” center Fardaws Aimaq whom seemingly everybody and their grandma wants.

No wonder Dave Matter, a Mizzou sportswriter for the St. Louis Post-Dispatch, called Brazile’s departure a “big blow” for the Missouri basketball program.

Based on the sheer number of f-bombs detonated in his Twitter comment thread, plenty of Missouri fans agree. They may want to cover their eyes for this next part:

Even More Bitter Pill to Swallow with Trevon Brazile

On the surface, it appears that the best Missouri basketball players from 2021-22 are the guys who put up the biggest numbers – Kobe Brown and Javon Pickett.

Look a little deeper at the advanced stats, however, and there’s a strong case to be made that Trevon Brazile was actually Mizzou’s best player. “Box Plus Minus, or BPM, measures box score productivity, and Brazile was Mizzou’s leader in both overall BPM (+3.8 points per 100 possessions) and Defense BPM (+2.2),” writes Arkansas basketball analyst Adam Ford of the must-read Fayvillains.com.

Granted, he’s a work in progress on offense, but some of that has to do with how low-usage he was on that side of the ball for Missouri. An off-season of development should help Brazile build on the promising flashed he showed as a freshman cutting to the basket and hitting 33% of his 33 three-point field goals (try saying that 3 times in a row).

Brazile’s high value, for now, comes mainly from his defense. “He’s much better as an off-ball defender, as smaller guards can get past him while bigger post guys can pound him inside (Jaylin Williams ate him up in both games),” Ford writes. “He’s at his best when he’s guarding a low-usage guy and can come help around the rim, maybe blocking a shot or securing a defensive rebound.”

Brazile’s addition to the Arkansas basketball roster gives Musselman flexibility, both in terms of position and roster depth. It’s possible, after all, that both Au’Diese Toney and Jaylin Williams depart. In that scenario, getting instant-impact frontcourt players like Brazile is critical. If Jaylin Williams stays, Brazile would most comfortably fit in as a power forward beside him, as Ford notes.

Another reason Brazile gave for choosing Fayetteville is the opportunity to challenge for a national title alongside a star-studded class of recruits featuring the likes of Nick Smith Jr., Anthony Black and Jordan Walsh.

It was a big factor,” Brazile told 247 Sports. “Bringing in three McDonald’s All-Americans was a big deal. Being able to play with talented guys with a high IQ will help me a lot.”

Going into his fourth season, Musselman appears to be mastering the art of weaving together multiple different kinds of newcomers into the program on a year by year basis. This summer, for instance, will see the arrival of transfers like Brazile who either have multiple years of eligibility or one, as well as freshmen who are either potential one-and-dones (usually Top 20-caliber recruits) or slightly lesser-ranked Top 100 types who will probably stay multiple seasons.

“What I think is really impressive about what Coach Musselman has done is that he’s got both one and done guys and multiple year guys in the same class,” ESPN’s Adam Finkelstein said on the Buzz 103.7 FM. “And so there’s tremendous depth in the group.”

“And there’s also versatility when it comes to both their individual styles, but also roster construction. Because let’s say best case scenario for these three kids and you have three guys who are one and done… Even if that happens though, you’ve got three other guys who are highly talented, multi-dimensional.

“Derrian Ford, he’s the type of guy that if he sticks around multiple years could grow into a huge impact player for Arkansas. And so that’s what I think is really the most impressive part about this class, is that yes, they out the five star guys, but they also have the depths around them and it’s quality depth.”

“It’s the type of depth that is ready to come in and make an impact next year and then able to grow into potentially focal points of the team in year two and year three down the road. And that’s the type of approach that leads to continuity so you don’t have to kind of hit reset every given year, which is what most teams do when they’re recruiting these five star guys.”

No kidding about that: