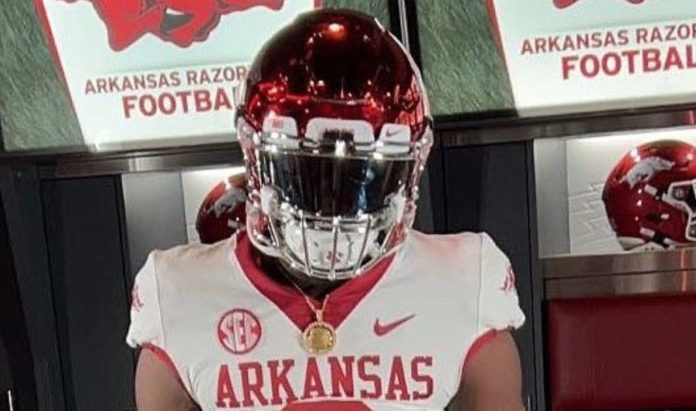 Much has been made about the success the Arkansas football program had in plumbing the transfer portal last year for its three starting defensive linemen. The trio of course, played lights out through much of the season and were a big reason for Arkansas’ 9-win tally. Tre Williams was the Hogs’ leading sack artist, defensive tackle John Ridgeway was one of the top defensive stoppers in FBS and defensive tackle/end Markell Utsey brought exactly the sort of positional flexibility coaches seek.

The not-so-silver lining of getting such plug-and-play graduate transfers, however, is that they usually stick around only one season. More importantly the need for so many instant starters indicates the cupboard at the position was pretty barren to begin with. In fact, as 247Sports’ Danny West points out, “Arkansas had the lowest number of four and five-star defensive linemen of anyone in the SEC this past season with just one. Even Vanderbilt had two. So did Missouri and Ole Miss. To no surprise, Alabama paced the conference in this category with a dozen and Texas A&M was right behind the Tide with 11.”

Also depressing: “The Razorbacks didn’t get an official visit from a single four-star defensive lineman in the 2022 cycle, which again puts them at the bottom of the SEC along with Vanderbilt for that category. Alabama hosted 13 four and five-star D-linemen. Georgia, Texas A&M and Florida each hosted nine.”

Hog fans wondering why the program never finishes in the Top 15 in national recruiting rankings need not look any farther than those stats for the most important reason. Yes, it matters that Arkansas is building a stout offensive line that appears to outpace even Alabama and Georgia in some metrics, but until it can close the gap on the defensive line the Razorbacks won’t be a serious threat to win a national title.

Adams isn’t just a good recruiter in theory. He’s already proven he has what it takes. He was defensive line coach with the Gamecocks when Jadeveon Clowney was wrecking backfields and went on to be the No. 1 pick in the NFL draft. Kelcy Quarles, too, joined Clowney in earning All-SEC recognition that year. The year before, Adams coached Sylvester Williams, a first-round pick from North Carolina.

“He’s a high energy guy, he’s a guy that just attracts kids with his enthusiasm,” Williams said. “He’s just a hard working guy that’s worked his way up. He’s a great recruiter and a great coach.”

We’ve already seen some of that play out in the way that Adams has gotten blue-chip four and five star talent in the classes of 2023 to 2024 to visit Arkansas. It’s been a while since Arkansas signed a top 20 national defensive lineman out of another state, but the Hogs appear to be in the early lead to do just that with defensive end Kavion Henderson, Rivals’ No. 18 recruit in the class of 2024.

Henderson, a 6’3″ 231 edge rusher from Leeds, Alabama, is that state’s No. 1 prospect. Not surprisingly, he has a bevy of scholarships from schools like Auburn, Georgia, Notre Dame, Oregon and Michigan. After coming back from a Prospect Day trip to Arkansas, he told Rivals’ Eric Lammers: “I’m going off relationship, no logos. Ever since I told coach (Sam) Pittman that, his staff been coming at me hard.”

“I already had that at home feeling after the first visit I took. They have been on top of the relationship piece. The time with Coach Pittman was great, I really love the staff. Coach (Scott) Fountain, coach (Deke) Adams, and coach Glitch (Keith Jones – Asst DL Coach) are doing great things up there and we are just working on building our relationships right now.”

It’s early going, and Alabama hasn’t yet offered Henderson, but at this stage both Rivals and 247Sports have Arkansas in the lead to get Henderson’s commitment. As Lammer wrote, “it would appear as if Arkansas is out front early, but it will be hard not to keep at least one eye on schools like Alabama, Georgia, LSU, and Auburn moving forward.”

Adams continues to get rave reviews for his recruiting process and has already landed the commitment from 4-star defensive end Quincy Rhodes, Jr., a Jacksonville, Ark. native.

Long-term recruiting is one thing, but tactical use of the transfer portal is here to stay in the new world of college football. The Hogs took a swing at Tulsa’s Jaxon Player and Missouri’s Mekhi Wingo, but both spurned the Hogs. Deke Adams hit a homer, though, when he landed defensive end Jordan Domineck, the best edge rusher available in the portal in early March.

Domineck, who starred at Georgia Tech, had been considering Auburn as his other top choice.

If Adams is able to help build the foundation for an elite, deep defensive line at Arkansas, he’ll need to start bringing in bigger, better interior linemen like Ridgeway into the program as well. More fundamentally, Adams just needs to stick around.

In a career that dates back to 1997, Adams has never spent more than three seasons in any one place. Since 2011, he’s been at eight different stops, including Arkansas now. The Hogs program itself is used to such movement. They haven’t had the same defensive line coach for consecutive seasons since Rory Segrest held the spot from 2014 to 2016. It’s no coincidence, likely, the front line hasn’t exactly had great success since. Arkansas has finished better than 12th in the SEC in sacks exactly once since Segrest left.

Part of the movement is the nomadic nature of the profession. But part of it is also the coach simply knowing. Smart coaches are great coaches, but they’re also smart enough to know when it’s time to hit the road and, perhaps, head somewhere with a greater talent pool. Perhaps that’s what appeals about Arkansas.

In terms of pay, Arkansas’ lack of success at the position shows up in where the program ranks for defensive line coaches. In his first season at Arkansas, Adams is set to take $400,000, which is the second-lowest in the SEC West. Below is a list of the highest-paid coaches in the nation for this position, with the SEC West coaches boldfaced.

Looking ahead for Arkansas Football

Sam Pittman said in March that the Razorbacks still have three scholarships to use for incoming transfers. With those, he wants two defensive linemen and a wide receiver.

No matter what kind of transfers the Hogs get, they should plenty of returning experience for depth. Zach Williams, for instance, had only one fewer tackle for-loss than the exited Williams. He probably played in 50 percent fewer snaps, too. You can pencil him in as a projected starter. Eric Gregory, a hybrid inside-outside lineman like Utsey, actually had more tackles for-loss than the man who he is presumably replacing. Nichols and Carter combined for 6 1/2 TFL playing reserve in the middle to Ridgeway who had four. Jashaud Stewart, Eric Thomas Jr. and highly touted LSU transfer Landon Jackson, too, should be in the mix.

The point? Adams could spin quite a weave with what he already has in-hand with the Hogs. But even if he can’t, even if Arkansas’ returners are simply standard (which, they will be, at worst), his nature and familiarity with the SEC can only pay dividends going forward, however long it lasts.

Best case scenario, he will start landing recruits like Kavion Henderson out of Deep South states with a lot more defensive line talent. Worst case, he should at least get Arkansas back to where it’s beating out Vanderbilt for blue chippers.

-Eric Bolin contributed to this piece