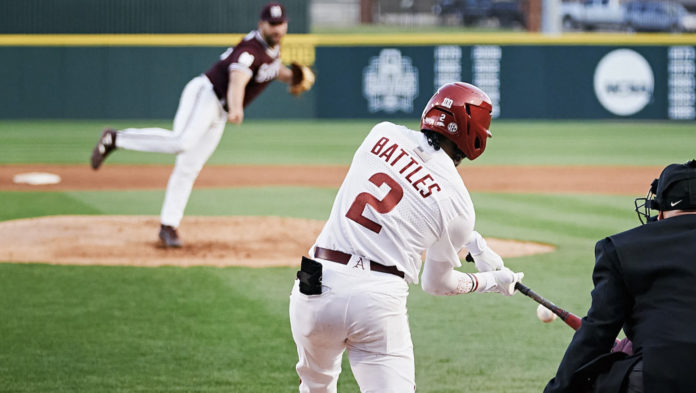 On Saturday night, the No. 2 Razorbacks (21-4, 7-1) continued to practically own the defending national champions, the Mississippi State Bulldogs (16-12, 3-5). The final score in Fayetteville was 12-5 for the series win, but zoom out a bit and the bigger picture looks even more lopsided. Arkansas has now won eight consecutive games against Mississippi State and owns the league’s longest active consecutive series win streak (13) as well as the SEC’s longest consecutive home series win streak (10).

In 2021, let’s not forget, the Hogs swept the Dogs at Dudy Noble Field when Mississippi State was ranked 2nd in the country. But later that spring, the Razorbacks’ shocking exit in the Super Regionals opened the door for Mississippi State to win their first National Championship.

Somehow, the Bulldogs did beat Arkansas in a race for a national championship, despite being slightly less consistent over the years than Arkansas. The Bulldogs have had four losing seasons in the past 15 years while Arkansas has had only one.

The way Arkansas played on Saturday night, it won’t be long before the Hogs snag their national title too.

After Mississippi State struck first with an early run in the top half of the first, it was all Arkansas. The Hogs scored eight runs across the first three innings, powered by back-to-back four-run outbursts in the second and third.

Brady Slavens hit the first of Arkansas’ four home runs on the night in the bottom of the third, breaking out of his slump with a 376-foot rocket off the balcony of the JB and Johnelle Hunt Family Baseball Development Center.

Ahead 8-1 in the fourth, Chris Lanzilli and Robert Moore went back-to-back with long balls of their own and extended the Razorbacks’ lead to nine. Lanzilli’s 45 career homers are fifth most among active Division I college baseball players.

The Hogs’ homer party was not finished, however, as Zack Gregory launched his second homer of the one inning later. Gregory’s dinger pushed Arkansas’ lead to 11-3, which was more than enough run support for starter Hagen Smith and the bullpen.

Cayden Wallace was the night’s leading offensive contributor, racking up four runs batted in on two hits, including a double. The Greenbrier, Ark., native and Razorback team captain is now slashing .314/.393/.510 on the season.

On the mound, Smith turned in his fourth quality start of the year to pick up his team-leading fifth win. The true freshman left-hander struck out seven over six innings of three-hit, three-run ball.

Gabriel Starks (2.0 IP, 2 SO) and Elijah Trest (1.0 IP) were solid in relief. The duo locked down the final three innings to secure the Razorbacks’ 12-5 win (via Razorbacks Communications).

Jalen Battles smoked a couple of homers for a series-opening 8-1 win at Baum-Walker Stadium.

Arkansas took control of Friday night’s game early, scoring six runs in the bottom half of the second and never looking back. Battles’ two-run bomb spurred the festivities as his first home run of the day traveled 420 feet to the Hog Pen in left field.

RBI singles by Michael Turner and Chris Lanzilli followed and set the stage for Robert Moore’s two-out, two-RBI triple to right center, which extended the Hogs’ second-inning lead to 6-0. Battles’ second homer of the day came one inning later and the Razorback shortstop lined an 0-2 pitch over the wall in left, pushing Arkansas’ advantage to 7-0 in the third.

That run support was more than enough for Razorback starter Connor Noland, who turned in his fourth quality start and earned his fourth win of the season. The veteran right-hander struck out six over seven innings of four-hit, one-run ball as he kept the Mississippi State baseball team off-balance all night long.

Arkansas’ bullpen was once again superb in the late innings. Zebulon Vermillion (1.0 IP, 1 SO) and Kole Ramage (1.0 IP, 1 SO) combined for two perfect innings in relief, retiring all six batters they faced to close out the game and secure the Razorbacks’ 8-1 win (via Razorback Communications)

Wiggins was dominant for five straight innings in his start, but sandwiched those innings with a two-run home run that sneaked out in the second inning and two runs allowed in the eighth inning.

The Razorbacks are 6-0 when Wiggins starts while the Bulldogs are 4-2 when Smith starts. At times both starters have looked like the best starter in the respective rotations, so this may be a low-scoring game. However, both starters have had a bad start so the two explosive offenses could get the advantage.

The Razorbacks are 14-1 in the last 15 games while Mississippi State is 5-1 in their last six. Arkansas has not lost a series while the Bulldogs have lost series to Long Beach State, Tulane and Georgia.

Arkansas has won six straight games against Mississippi State, with sweeps in 2019 and 2021. Arkansas swept the Bulldogs in their home stadium last and in their championship season, so they should be able to sweep a less dangerous Bulldogs team at home as well.

The past five series between the teams have been sweeps, with Arkansas taking three of the last four.

“It’s been unusual because the teams are probably fairly even in those years for the most part,” Van Horn said. “It’s unusual to win three in a row against somebody that’s really good, and they’ve been really good.”

More on Arkansas vs Mississippi State, published going into the series:

Arkansas pitcher and projected ace Peyton Pallette will miss the entire season due to Tommy John surgery he underwent in January.  Mississippi State will be without one of the top college prospects in Landon Sims who had to undergo Tommy John surgery earlier this month.

“You can’t replace (Sims),” head coach Dave Van Horn said in a press conference. “You just try to fill it in and hope some guys step up. I feel like we’re in the same position with Pallette and I’m sure there’s a lot of programs across the country that have the same issues. You just got to move on.”

The teams have a similar batting average with the Bulldogs slashing .274/.391/.474 and the Razorbacks hitting .278/.390/.451. Mississippi State has the advantage in longballs, swatting 43 out of the park in 26 games while the Hogs have knocked 27 roundtrippers in 23 games. This helps the Bulldogs to 8.2 runs per game while Arkansas scores 7.4 runs per game.

The Bulldog lineup is loaded top-to-bottom, but there are a few players that have been especially productive this season. Sophomore third baseman Kamren James leads the team with a .340 average and he has three home runs and 14 RBIs. Junior left fielder Brad Cumbest, meanwhile, is hitting .316 with seven home runs and 20 RBIs.

That duo is hot going into Friday. James is hitting .448 (13-29) over the past seven games. Cumbest had a six-game hitting streak end against Memphis Tuesday, but he hit .462(12-26) during that streak.

Along with James and Cumbest, senior second baseman RJ Yeager is on a 10-game hit streak, hitting .400(16-40) with six home runs.

The Bulldogs have a big-time slugging duo in the middle of the order as freshman designated hitter Hines Hunter and sophomore right fielder Kellum Clark lead the team with eight bombs each, while Hines is hitting .312 with 31 RBIs and Clark is hitting .266 with 26 RBIs.

The Hogs have a dangerous lineup as well. Senior center fielder Braydon Webb is the hottest Arkansas baseball hitter over the past nine games. He started the season 0-23, but has 13 hits in his past 31 at-bats which is a .419 average and he has hit five home runs which leads the team.

“We’ve always seen his talent,” Van Horn said. “His fall was incredible. He was probably one of our best hitters and probably led us in home runs. He’s always been a really good defender and a good arm. I just think once he got over the hump a little bit, confidence (went) up and (he got) two big hits against Missouri that helped us win those two games…The skill is there. Hopefully, he’ll continue to do what he does: play solid defense, be a tough out at the plate and if they make a mistake he can hit the ball out of the park.”

Sophomore Cayden Wallace had a great weekend against Missouri and hit a home run against UALR on Tuesday, giving him seven hits and six runs scored in the past four games. He is hitting .304 with four home runs and 24 RBIs for the season.

Arkansas will get back a big bat back in sophomore transfer Jace Bohrofen, who has not played since the March, 5, win against Southeastern. He was heating up before injuring his shoulder, collecting six hits in his last 11 at-bats before diving into the wall for a fly ball in pregame warmups and injuring his shoulder.

“He’ll be on the roster this weekend,” Van Horn said. “He hit live (Wednesday), took batting practice on the field Tuesday. He looked pretty good. Swinging, he’s fine. Obviously throwing he’s fine because it’s his non-throwing shoulder. He hasn’t slid or dove or had any collisions. I think he’s on his way back. I’m not sure if I’ll start him or play him or what. I don’t know yet, we’ll see how the workout goes (Thursday).”

Arkansas has the advantage in pitching statistics. Arkansas has a team ERA of 3.46 while limiting batters to a .223 average. The Bulldogs have an ERA of 4.82 and let hitters bat .243.

“It’s also worth noting that Mississippi State is hitting over .300 against left-handed pitching while Arkansas’ lefties have limited teams to just .214 against them.”

The Bulldogs do have sophomore right-hander Brooks Auger coming out of the bullpen with a 1.46 ERA over 12.1 innings and sophomore starting pitcher Cade Smith who boasts a 2.91 ERA over 34 innings.

All three weekend starters for Arkansas have sub-four ERAs and freshman Brady Tygart has looked great closing games for the Razorbacks. He has a 1.59 ERA and four saves over 11.1 innings, including a 0.00 ERA in 5.2 innings of conference play.