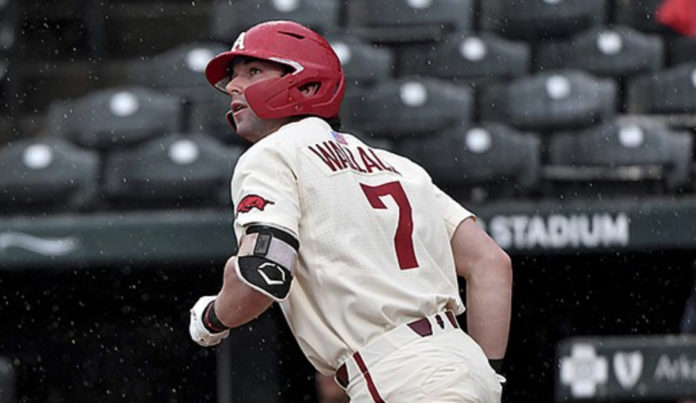 Cayden Wallace has quickly turned a disappointing start into what may become the greatest freshman season by a Razorback hitter.

The Greenbrier, Ark. native came into the season as the 25th ranked high school recruit in the class of 2020 with hitting and power metrics that left almost all of his peers in the dust.

Wallace has not disappointed.

The newly anointed SEC Co-Freshman of the Week did plenty of damage against No. 3 Ole Miss this past weekend in Arkansas’ biggest series to date. Wallace swatted in a team-high six RBIs on the weekend and hit a three-run homer in the series-clinching Game 3 win.

In that series, which established Arkansas as the nation’s clear-cut No. 1 team, he also hit two doubles, scored two runs, and drew two walks.

At this rate, Wallace is on pace to hit 14 home runs and 36 RBIs during the regular season. That would put him up there with some of the greatest hitters in Arkansas baseball program history, including its most recent all-timer, Heston Kjerstad.

Kjerstad, who has a similar build to Wallace but is a bit taller, hit 14 home runs during his freshman season.

Wallace started the year hitting in the seven-hole but was moved into the cleanup spot after four games. He has flourished ever since.

“I think he was hitting about .170 and we took him from the seven or eight-hole and moved him up to the four-hole and he’s hit ever since. Just a good player. He knows the strike zone a little bit. Obviously he can hit that fastball, but he can also hit that off-speed pitch and that’s the difference.”

Wallace was actually 1-13 (.077) through four games when Van Horn moved him to the cleanup spot in the order. He had no extra-base hits or RBIs at the time, but he had showed promise in drawing five walks and scoring three runs in those first four games.

Since the slow start, Wallace has hit for a .330 batting average in his last 25 games. During an 11-game hit streak he built his batting average up from .226 to a season-high .323 following Game 1 of the UALR series.

He has shown considerable upside by hitting .462 during that hitting streak and .361 over the first 21 games since he moved up in the order.

Following his first off-night on March 7, he went 5-7 with two home runs, a double, three RBIs, five runs scored, two walks and a hit-by-pitch in two games against Louisiana Tech.

His second day off came on March 30. Following that game, he hit 7-14 with a home run, two RBIs, three runs scored, and three walks during the final four games of his hit streak.

Wallace played third base for Greenbrier High School, but that position was loaded at Arkansas. So Dave Van Horn moved him to right field, where he has shown off his arm at times and rarely misplays a ball hit to him.

Wallace’s bat has impressed the Razorback faithful, but his fielding has also impressed coach Van Horn.

“He’s a really good athlete,” Van Horn said. “He can run, he can really run. He can throw. He works hard and he wanted to play.”

“He came back after the [winter] holidays and just spent 95% of his time with the outfields. He just, he got better quick. But I’d say that he’s become a much better defender a lot sooner than I thought he would.”

Coincidentally, though this position switch, Wallace is directly walking in the footsteps of Kjerstad, who played the same position for Arkansas before joining the Baltimore Orioles organization. (Since then, Kjerstad has been sidelined at times dealing with myocarditis)

While Kjerstad hit left-handed and Wallace is a righty, they are both power-hitting right fielders who can draw a walk.

Van Horn said that Wallace is having as good, and in some cases better, season than all the Arkansas baseball freshmen he’s coached.

“You think about [Andrew] Benentindi, he was banged up a little bit, but he had an okay freshman year and a great sophomore year.”

“You think about some of the guys that are from way back, that maybe are physically the same, like maybe a Danny Hamblin or something, but that’s going way back. Danny played pretty much everyday as a freshman.”

“Cayden’s doing every bit of what Danny did. And a few others, you know we’ve talked about Heston Kjerstad and those type of guys because he’s a bigger kid. He can hit for some power. He’s been good.”

Kjerstad’s hitting numbers, outside of home runs and slugging, went down in his sophomore year. So if Wallace can maintain what he is doing at the plate, he could take Kjerstad’s crown as Arkansas’ best career hitter.

“People say I had no childhood because I played baseball, but really I feel like I had a great childhood playing baseball,” Cayden Wallace said on the Beyond the Podium Podcast last summer.

“Because I loved it and it wasn’t my parents making me do it, it was me. You don’t really get to see your friends at all in the summer… I missed the first week of school my senior year.”

No Matter How You Slice It, Arkansas Baseball is No. 1

The college baseball community agrees that Arkansas is the No. 1 team in the country.

It is the third time that Arkansas is the undisputed No. 1 squad this year as well as the seventh consecutive week that the Hogs maintain the No. 1 spot in at least one of the six.

The Hogs, 27-5 overall on the season, are in sole possession of first place in the SEC West with a 9-3 mark in conference play. They beat UAPB 12-4 on Tuesday night.

Learn more about Cayden Wallace, his Greenbrier background and why he chose the Hogs here: