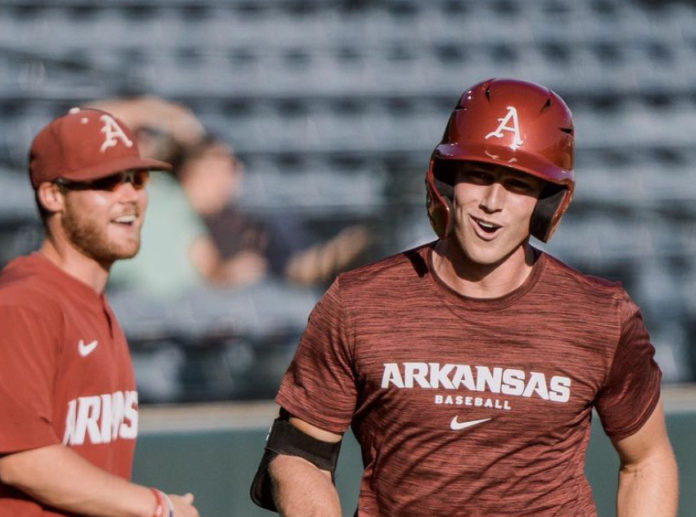 One of the most intriguing new addition of the Arkansas baseball team this season is Oklahoma transfer Jace Bohrofen. He is the former No. 3 player from Oklahoma, No. 33 in Perfect Game’s national recruit rankings and No. 1 in punchy, short nicknames (“J-BO”).

Bohrofen was in the recruiting class of 2020 with outfielder Cayden Wallace and second baseman Robert Moore (before Moore reclassified), who had impressive 2021 campaigns. Wallace edged Bohrofen, being ranked 8 spots higher in the class, but if Bohrofen can have a season resembling a top-40 prospect, it would create a dangerous “Big 3” in the middle of the order.

“I’m going to be a guy who hits for average, with some power,” Bohrofen said in an interview with THV-11 in July. “I know my numbers don’t show the best, kind of a small sample size. Obviously, I intend to improve on that. I just know the player that I am, and the Razorbacks got a good one.”

The confident sophomore outfielder wants to win and is ready to put in the work to make it happen. He may be the missing piece, but only time will tell.

“I feel like I’m a guy that’ll get in there, work his butt off, and crack the lineup hopefully day one,” Bohrofen said in an interview with Will Kharfen in The Commodore Corner. “I feel like I’m one of those pieces to help them win in Omaha.”

The Hogs are on the verge of a championship seemingly every year, getting within one out in 2018. They returned to Omaha in 2019 and failed to make it to the World Series in 2021 after one of the most dominant seasons in college baseball history. Bohrofen is the kind of major recruit who could have made a difference for Arkansas last season.

“(Arkansas is) one of the schools that recruited me out of high school. They were in my top-three coming out of high school,” Bohrofen told THV. “I had a really good relationship with coach [Dave] Van Horn and coach [Matt] Thompson through the recruiting process. They were one of the schools that reached out to me when I entered the (transfer) portal. I just talked to coach Thompson and I thought it was going to be a really good fit for me.”

Arkansas tried to recruit Bohrofen when he came out of high school in 2020. The Razorbacks were one of his final three schools before ultimately deciding on Oklahoma. After entering the transfer portal, Arkansas was on his mind because he was already familiar with the Razorbacks and his relationship with Wallace probably factored into his decision.

“I’ve got a really good relationship with Cayden,” Bohrofen said in an interview with Andrew Hutchison of HawgBeat. “We’ve played growing up ever since we were little, since we were about 12 or so, and just kind of kept up through the years. It’s pretty cool to play with him. He’s a good player and a good dude, so I can’t wait to get there.”

Bohrofen is already familiar with Moore as well because he played alongside Wallace and Moore at the 2019 Perfect Game All-American Classic. Bohrofen earned himself a favorable scouting report from the people at Perfect Game after the event. Here’s his scouting report:

“Jace Bohrofen is a 2020 OF with a 6-2 195 lb. frame from Oklahoma City, OK who attends Westmoore. Tall athletic build with good present strength and plenty of physical projection remaining. 6.59 runner, very easy and athletic actions in the outfield defensively, glides to the ball with sound footwork and good balance, makes strong accurate throws with carry to them, has the potential to be an elite level defensive outfielder.”

“Left handed hitter, compact swing with loose and easy extension out front, short shift into contact with a simple trigger, low effort tension free swing with present bat speed, creates some whip to the barrel and can show pull power although he is more of a gap to gap hitter at present.”

As a freshman with the Sooners, the Oklahoma City native hit .252 with two home runs and 18 RBIs in 35 games. He played a perfect right field, committing no errors and getting two outfield assists. He also spent time at designated hitter.

Bohrofen was named to the Big-12 All-Freshman team for his efforts. His numbers are not eye-popping, but he has time for improvement and will at least contribute defensively to any outfield.

More recently, Bohrofen lit up the Cape Cod League with the Falmouth Commodores.

Bohrofen had a .311 batting average, and a .443 on-base percentage through his first 18 games, accumulating 12 walks and four hit by pitches. He also displayed his massive power by posting a .672 slugging percentage, along with five home runs and 16 runs batted in.

He cooled down after the hot start, finishing with a .279 average five home runs and 19 RBIs in 34 games. He also had a .442 on-base percentage and a .504 slugging. He finished in the top-20 in the Cape Cod League in batting average, home runs and RBIs.

“Everyone’s talented, so you’re really gonna see the guys that can really dig their foot in, grind, and then see who wants to be the better player and come out on top,” Bohrofen told Kharfen. “It’s honestly just a blessing to be here and I’m excited to see what’s in store for me.”

Bohrofen has a lot of similar traits as former Arkansas great and Golden Spikes winner Andrew Benintendi. Both are left-handed hitters who hit for average but have good power. They are also both athletic players and plus defenders in the outfield. Benintendi has big shoes to fill at Arkansas, so it would be a stretch to say anyone is the next Benny Baseball, but as a former top-40 prospect there is immense room for growth. However, Bohrofen sees similarities between himself and a different MLB player.

“I feel like I’m similar to and image my game off of Corey Seager, one of my favorite players,” Bohrofen told Kharfen. “I feel we have similar body types and as far as his swing and approach, I try to watch video from him and see what he does in certain situations.”

Bohrofen’s potential with Arkansas is compelling. If the former top-40 prospect lives up to his ranking, the Hogs may be the top team in baseball for the second consecutive season. He should fit into the lineup right away.

His connection with Wallace could help create some instant chemistry among them and help him feel comfortable in the team early on. His experiences at the Perfect Game Classic with Moore and Wallace has already given him a taste of what kind of damage the trio could do.

Powered by the new “Big 3” of Bohrofen, Wallace and Moore, the Hogs could redeem their disappointing end to a dominant season in 2021.

“I feel like I can get in that system and help the team win right away with my development with coach Thompson and with the other coaches,” Bohrofen told THV-11. “I think that will take my career a long way.”

Here are clips of Bohrofren this summer: