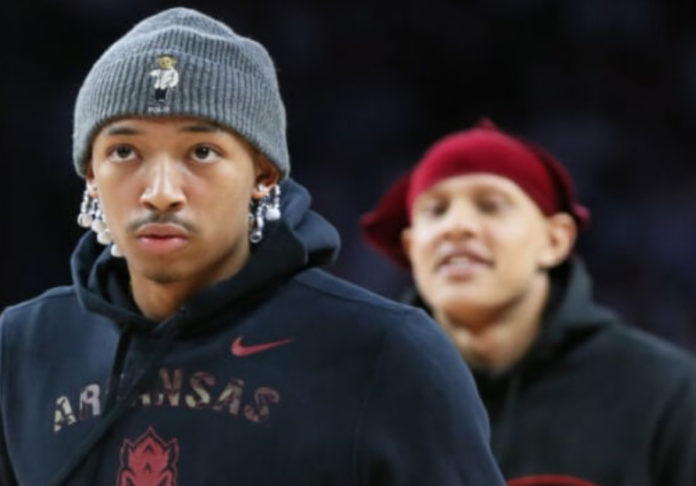 When it’s all said and done, there’s a chance that the most talented Arkansas basketball class in at least a generation doesn’t deliver on expectations that seem to grow more super-sized by the day.

Top 3 classes walk through the doors at Duke, Kentucky and UCLA all the time and fail to win a national title. Or even get to a Final Four. Some, after all, get ousted in in the early rounds of the NCAA Tournament as make national darlings of their low-seeded conquerors.

So why should this group of six Razorback incoming freshmen, all of whom are Top 100 recruits, be any different? While Arkansas basketball fans love seeing three McDonald’s All-Americans on their roster, they know sparkling resumes serve as no immunity against heartbreak.

Still, even if the end of 2022-23 doesn’t go as planned, these recruits and the returning Razorbacks are doing an awful lot for Arkansas basketball months before the season even tips off. Old-timers may hate the idea of sizzle influencing substance, but in an era of where social media-fueled branding and promotion matter a lot, Arkansas basketball’s No. 2 class is already delivering by helping to push Arkansas into the national limelight like never before.

In the hours following the crowning of Kansas as national champions for the 2021-22 season, national college basketball analysts fired off their first rounds of too-early rankings for next season. Recruits across the nation saw Arkansas as No. 1 in a few of them. If you don’t think that will help Eric Musselman sign even more blue-chip players in coming years, you have been living under a rock.

This is the first elite class of Razorback freshmen to help Arkansas reach No. 1 in major preseason polls and rankings based on their reputations. As great as the “Triplets” of the late 1970s were, Sidney Moncrief, Ron Brewer and Marvin Delph did not all enter during the same year and as incoming freshmen weren’t nearly as well-known nationally as they would become later in their time in Fayetteville.

Fast forward to 1988, and Oliver Miller, Todd Day and Lee Mayberry came onto the scene as highly touted freshmen (the latter two were McDonald’s All-Americans). That 1988-89 team didn’t entered the season ranked in the Top 25, nor did it ever break into the Top 25 during the season despite finishing with a 25-7 (largely because it lost its only games playing ranked teams).

Four years later, in the fall of 1992, Scotty Thurman and Corliss Williamson started their legendary college careers in Fayetteville as a highly acclaimed duo (Williamson was the only Arkansan to win the Gatorade National Player of the Year award). They would see plenty of No. 1 rankings later in their Arkansas basketball tenures, but few people thought the Razorbacks were No. 1-caliber entering the 1992-93 season given the Hogs had just lost three first-round NBA Draft picks in the aforementioned Day, Mayberry and Miller.

This 2022-23 squad will be a different story. It is practically guaranteed to enter the season as a Top 25 team, given the recruiting class and momentum built up from back-to-back Elite Eight finishes. That should happen no matter what happens on the transfer market in the coming months. Next season’s team could also end up breaking the previous program record of three first-round Razorback draft picks if Jaylin Williams returns and Nick Smith Jr., Jordan Walsh and Anthony Black develop into “one-and-done”-level college players (Smith looks like a safer bet than Moses Moody at the same age to be such a player).

Some analysts were already slotting Arkansas at the very top of their way-too-early rankings:

Here’s a sampling of some of the No. 1 rankings that were causing a stir among Razorback fans on Tuesday:

Jeff Borzello: “There’s not a clear No. 1 entering the offseason, but five-star guard Anthony Black’s commitment to Arkansas in late March gives the Razorbacks the edge. Eric Musselman, who has established himself as one of the best transfer recruiters and coaches in the country, is bringing the nation’s second-best high school recruiting class to a program coming off back-to-back Elite Eight appearances. Nick Smith is in contention to be the No. 1 pick in 2023, while Jordan Walsh and Black are also five-star prospects who could start right away. There are some roster questions, mainly focused on Jaylin Williams and Au’Diese Toney, but if one of the two return, I think this is the best team in the country.”

*Toney declared for the NBA Draft a few hours after these lists were released. More on the ramifications of that below.

“Eric Musselman is known best for his ability to recruit the transfer portal, but the Hogs are bringing in an elite freshman class that should complement a talented returning core,” Kevin Sweeney wrote. “The headliner: combo guard Nick Smith Jr., who could be in the mix for the No. 1 pick in the 2023 NBA draft. Smith, point guard Anthony Black and athletic forward Jordan Walsh are the main prizes in this loaded class and bring elite-level upside to the table. One huge draft decision to watch is that of star center Jaylin Williams, who blossomed into one of the SEC’s best bigs down the stretch. He’s considered to be returning for the purposes of these rankings, but his stock almost certainly rose down the stretch. If Williams returns as projected, this is the best team in the country.

Let’s give analyst Seth Davis, a Duke grad, some credit here. He might have shown some pro-Duke bias historically over Arkansas (as our Jim Harris points out here), but in this case he’s put Arkansas over his alma mater. Unfortunately, it appears Davis is doing this because he’s assuming Notae will be back.

In the pay-walled article, he counts Notae among the returning players and writes: “The biggest question mark is Notae. He is already a fifth-year senior (he sat out as a redshirt after transferring from Jacksonville). He has another year of eligibility if he wants it.”

Davis appears to have somehow missed the memo from a couple days ago that JD Notae has hired an agent ahead of the NBA Draft and is not coming back next season.

Here, the Hogs are ranked No. 6. Mike DeCourcey writes that without JD Notae, “there should be enough – given the spectacular recruiting success – for another deep NCAA run and a battle for the championship of the Southeastern Conference. One has to believe big man Jaylin Williams is back, because he needs to continue to expand his offensive game. If he develops in the off-season as a 3-point shooter – and we’ve seen dozens of players make such improvements – he will have a shot at the NBA dream. And Arkansas will have a shot at its first Final Four since 1995.”

Yes, Toney hiring an agent and leaving for the pros is a blow. He was the team’s best defenders and one of the best defenders in Arkansas basketball history, putting on an NCAA Tournament show in the same league as Sidney Moncrief.

While it will be difficult to find as good of a defender in the transfer portal, it’s likely that Musselman will find someone who is more of an offensive threat. 6’6″ wing Noah Carter out of Northern Iowa may be such a player, for instance. While Carter shot only 30% from three-point range in 2021-22 as a junior, he shot much more efficiently from the floor earlier in his career when he wasn’t shooting as much. Someone who can shoot high percentages without needing the ball much fits right in line with what Toney brought to the table and what Musselman may be seeking in a replacement.

As other top teams’ top players announce for the NBA Draft or enter the transfer portal, Arkansas should remain highly ranked in these preseason lists.

While I have great respect for CBS analysts Gary Parrish and Matt Norlander, a lot of the college basketball analysts on the rest of their team continue to astound me with their foibles involving Arkansas basketball. As I have documented with borderline-OCD glee, CBS temporarily scrubbed Arkansas’ victory over Auburn from the public record and allowed a clown to insult Eric Musselman’s coaching chops among other issues.

CBS’ Avery Johnson is up to it again. The former Alabama basketball coach, who seems like a nice enough guy, somehow missed the same memo regarding Notae’s hiring of an agent that Seth Davis did.

That’s pretty critical news, and yet in the below clip Johnson acts like Notae is on the fence.

At least Johnson’s oversight, like Seth Davis’, produces a positive take when it comes to the Razorbacks. That’s progress.

Gary Parrish, for his part, slots the Razorbacks at No. 6. In his actual video breakdown, he says he would have had Arkansas higher if Notae would have chosen to come back, so it appears Johnson just saw Parrish’s rankings but didn’t watch his colleague’s video.

Below are excerpts from Parrish’s breakdown of his most highly-ranked teams entering 2022-23, capped by an absolute humdinger of a finish you’ve got to see to believe.

“I’ve got Oscar Tshiebwe back, Sahvir Wheeler back, Keion Brooks back. I’ve got Shaedon Sharpe in the NBA Draft.”

“He’s a projected top 10 pick. I know he’s considering staying at Kentucky. Most top 10 picks don’t come back to school. They enter the NBA Draft. I’m assuming he is until he says he’s not.”

I know that Armando Bacot could decide to move on. Caleb Love could decide to move on. Here’s the truth: everybody in Carolina’s rotation, which is like six guys, is eligible to return to school except for Brady Manek and nobody in Carolina’s rotation is a projected first round pick. How much is name, image and likeness rights worth for Armando Bacot, Caleb Love?”

“Compared to what they’ll make trying to play professional basketball somewhere. I don’t know if those guys are coming back, but for the purposes of the version 1.0 of the Top 25, I got everybody except Brady Manek returning.”

Jaime Jaquez and Tyger Campbell returning, and they’ll be joined by a top 10 recruiting class, highlighted by five-star prospect Amari Bailey. You know about his mom?”

It’s easy to dismiss such early rankings, given the fluidity of the transfer market and who will end up officially leaving for the NBA Draft, as meaningless jabber. Analysts create them, after all, to create buzz and capture attention when the season’s games are officially over.

But they also serve as big platforms for promotion, and in that way they do matter. Arkansas won’t have an opportunity to win an official game until November, but Eric Musselman is always looking for ways to win national attention in these intervening months. Getting the top spot on these too-early rankings serves his long-term purposes well.

So does regularly making appearances on college basketball podcasts and shows. And bringing his family along for the ride sometimes, too.

The below interview excerpt from late last week is a perfect example of what makes the Razorback program so successful. In the clip, Musselman and his wife, Danyelle Musselman, talk about how even on “vacation” Eric Musselman is up and at ’em, ready to work the transfer portal and make FaceTime calls as early as 7 am after only five hours of sleep. A wry smile spreading across her face, Danyelle then asks: “If you woke up next to me, would you be in the portal at 7 am?”

Make sure to check it out here: