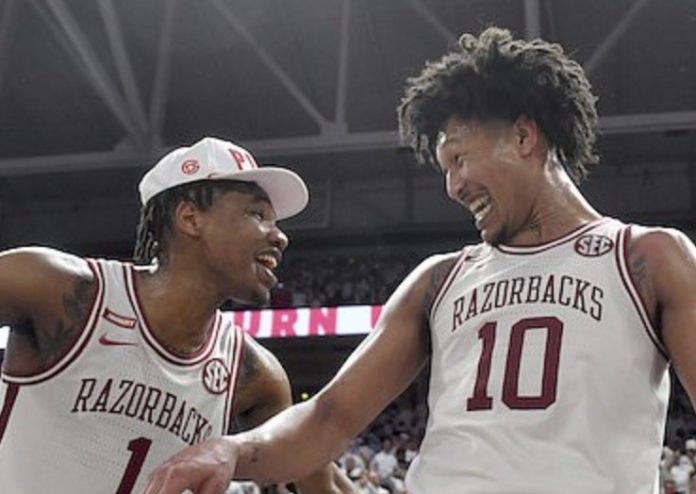 Some of the best Arkansas basketball players had the good fortune to play with each other and achieve greatness on both an individual and team level. Deep runs in the NCAA Tournament are a big reason that Corliss Williamson and Scotty Thurman are considered the greatest Razorback duo of all time.

Since then, we have seen the likes of Bobby Portis and Michael Qualls, and Daryl Macon and Jaylen Barford, but those duos weren’t able to come close to matching the team success standards that Williamson and Thurman set. Those two won a national Championship in 1994 and made it to the finals in 1995.

Now comes JD Notae and Jaylin Williams, the first Arkansas basketball duo since Thurman and Williamson to win All-SEC first team honors. They are also the first Razorbacks duo to play big roles on Arkansas teams that earned a No. 4 seed or higher in consecutive NCAA Tournaments.

“Those are household names here in Arkansas,” Williams said of Williamson and Thurman. “You hear about what they did for the state of Arkansas.

“What they did for their team and the rep that they have here in Arkansas, it’s crazy just being mentioned in the same category as those two guys.”

It’s not too crazy to say JD Notae and Jaylin Williams have established themselves as the best Razorbacks duo since Corliss and Scotty. Before getting into how high Notae and Williams can rise in the ranks of all-time Hog tandems, let’s take a step back and appreciate the best ever to do it:

It is not possible to talk about great Hogs without talking about Corliss Williamson and you can’t talk about Corliss without mentioning Scotty Thurman.  It would be like giving Michael Jordan the Oscar for Best Player without talking about Scottie Pippen as Best Player in a Supporting Role.  For me, that’s a better way to look at them than the worn-out Batman & Robin comparison.

Robin was a sycophant who road Batman’s coattails all the way to, well…..I don’t know where…..but not to the slew of Batman movies we’ve had to endure over the years (just sayin’).

To be clear, Corliss & Scotty had some other really good teammates.  Point guard Corey Beck comes to mind, but most would be a little bit of an afterthought had Corliss not put the entire program on his back and willed us to a National Championship.  Scotty didn’t ride anybody’s coattails.  He was a smooth as silk scoring threat who played a critical role in beating Duke to win it all if, that is, you think it’s critical to hit a shot that seals the deal.

And, to be just as clear, Scotty’s role in the National Championship did not begin in the final game.  He was great all year.

As a result of Corliss and Scotty’s consistently great play, they achieved the rare feat of earning 1st Team All-SEC honors in three consecutive seasons – while on the same team.  This doesn’t happen that often for any program, much less the Hogs. Unfortunately, that feat is not something that is possible for JD Notae and Jaylin Williams to achieve only because JD won’t be around long enough.

Like Corliss and Scotty, JD & JWill are both tough as nails.  They’re both good in the locker room (from what I know).  They’re both coachable.  They both love the Arkansas basketball program and the state they play for.  And, as a result, they’re both winners who deserve every award and accolade they’ve been given and have probably been slighted in some ways that I don’t even know about.

JD can beat you in so many ways it’s almost impossible to gameplan for him.  Yes, sometimes when he scores 14, you think he scored 25 because of the way he does it.  But, while he’s wowing you as a scoring threat, he’s quietly slipping the ball to teammates and racking up assists.  Think of the Kentucky game:  30 points + 8 assists.  That’s contributing somewhere between 46 and 54 points for the game.

And let’s not forget that his shooting range, which basically includes the first row of the parking lot outside Bud Walton Arena. That makes up for his relatively low shooting percentages, stretching defenses to their limits and creates space for his teammates to do their thing under less duress.

In Praise of JD Notae

I see two things stand out that make JD not just a phenomenal player, but a hero. The first: he’s not playing his natural position. He’s a scoring guard. We all know that. But willingly taking on the point guard duties and continuing to score at the level he does is something to write home about. In fact, you could make the case that he’s a mixture of Scotty Thurman as a shooter and Corey Beck in toughness.

It’s true that Scotty shot 43.2% on three-pointers for his career and JD shot 30.6% this year, but when you consider that JD plays point guard and has been forced to create far more shots than Scotty as a forward had to, the comparison is still on target.  Toughness can’t really be measured through a stat line, but it’s not a stretch to make the comparison between Notae and Beck in that immeasurable metric.

The second might have been even tougher for him to pull off on a personal level.  That is his internalization that, in Mussketball, if you don’t play defense, you don’t play at all.  It’s what we loved about Nolan and we love it today with Muss.  JD got the message and instead of pouting, he became one of the better defenders in the league, if not the country, but certainly he’s a better defender than Scotty was.

The Evolution of Jaylin Williams

With JWill, it was the opposite.  He showed us last year that he could and would play defense at the highest level and that he has an uncanny ability to turn the other team over by taking charges.  Throw in his point guard-like passing ability and you flat out have a playa!  He’s also the best passing big man in the SEC.

The only thing he lacked for a while was his desire to score.  It turns out his lack of selfishness wasn’t helping the team.  So, what did he do?  He started looking to score.  What did the team do?  We started to win like we should have been all along.

In fact, JWill scored in double digits just three times in our first fifteen games.  We were to 10-5 during that stretch.  For the rest of the regular season, he scored in double digits in 15 of 16 games.  We were 14-2 in those games against tougher opponents.  His newly found offensive mindset played a MAJOR role in getting the Hogs to where we are today. And it will take Williams and Notae returning to the form they showed in that 16-game stretch for the Hogs to knock off Vermont in the first round of the NCAA Tournament.

Adding offense to JWill’s deadly arsenal had the complementary effect of JD adding defense to his already lethal quiver of arrows.

The coming weeks will determine how we ultimately view Notae and Williams among the pantheon of Razorback greats.

JD and JWill already have Elite 8 appearances under their belts.  Can they take it a step further in the next month?  If you’d asked me this question in January I would have said, “Not on your life.”

Nowadays, it’s more like: “I wouldn’t bet against them.”  Yes, it’s true that we somehow found a way to look like a high school team in our semi-final SEC Tournament loss to Texas A&M.  But keep in mind that Corliss & Scotty’s teams never won the SEC Tournament either.  And, I might add, Texas A&M took care of business against NCAA Tournament #2 seed Auburn in Tampa as well, so it wasn’t a complete fluke.

In the movie Moneyball, Brad Pitt plays Billy Beane, General Manager for the Oakland A’s.  After the A’s won 20 games in a row to set a Major League Baseball record, Jonah Hill’s character, Peter Brand, heaps congratulations on Beane.  Beane’s response was, “All people care about is whether you win the last game of the season.”

We can already put JD and JWill in the same conversation with Corliss and Scotty as two of the greatest in the SEC era. When talking all-time, however, I’m not certain we have to win the last game of the season for them to be placed on the Mount Rushmore of Razorback basketball duos.

Unlike JD, J-Will has two more chances (if he wants them) after this year to join a club in which few Hogs can claim membership in by winning a national title.  JD can stick around for his COVID year, but he’s not showing many signs of coming back.  Plus, it would be very difficult to increase his draft stock by trying to eclipse the current year he’s having with an even better one next year.

If JD and J-Will want to join the national champion club together, and thereby truly become the next Corliss & Scotty, it’s probably now or never.  But falling a bit short of that shouldn’t diminish an impact on the Arkansas basketball program that has breathed new life in those who had nearly given up and inspired a new generation of those not around the last time the Hogs took us this far.

Below is a list of the greatest Razorback basketball duos ever, with stats from some of their best years. I’ve limited the number of years shown to two, even though Williamson and Thurman played well enough as freshmen that 1992-93 could warrant a spot. Same goes for the sophomore seasons of Todd Day and Lee Mayberry, which ended in the 1990 Final Four (Hogs were also a No. 4 seed that year).

The strength of schedule is a metric that takes into account how good the Razorbacks’ opponents were in a given season. The more recent seasons also include the advanced stats Win Shares (an estimate of the number of wins contributed by a player due to his offense and defense) and Win Shares Per 40 Minutes. The source is sports-reference.com.

Two of the duos listed above were actually part of all-time Razorback trios. Marvin Delph could have just as easily been listed instead of Ron Brewer beside Sidney Moncrief in 1977-78 (Moncrief’s junior year and the senior year of Delph and Brewer.

Same goes with Oliver Miller instead of Lee Mayberry beside Toddy Day. I arbitrarily chose Brewer and Mayberry as part of great duos so that at least some of these great trios were mentioned in this all-time Razorbacks list.