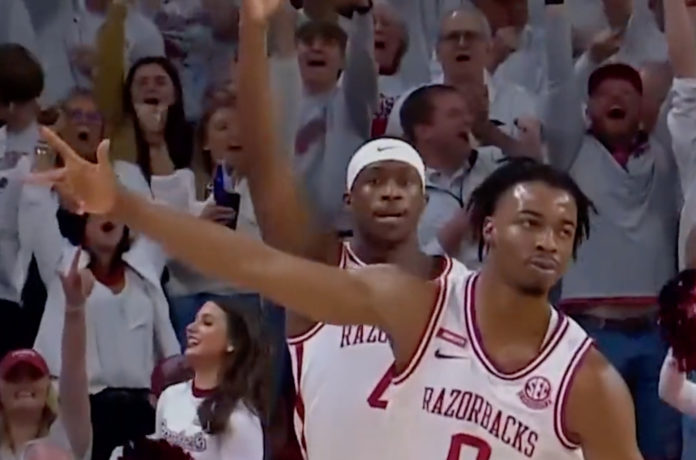 As expected, Arkansas is a 4-seed in the NCAA Tournament. Less expected, though it was a known possibility, the NCAA is sending Arkansas to a northeastern town in to play Vermont and potentially UConn.

Playing those teams in Buffalo is a bit of a tough break, but not something the Razorbacks should spend any time upset about. After ending the regular season and SEC Tournament on sour notes, Vermont should be Arkansas basketball’s whole focus for the next few days.

Vermont is ranked 52nd in the NET and 59th in KenPom, proving they have played consistently good basketball this season. Beating them on a neutral court would be very close to a Quad 1 win in the regular season (top 50 in NET rankings were Quad 1 on a neutral court). They have three players who shoot over 40% from three and two of those have made more than 60% of their shots inside the arc, so the Arkansas defense that we’ve seen over the last two months will have to travel to Buffalo if the Hogs are going to avoid an upset.

The Catamounts did struggle a bit in their nonconference season, losing four times in November and December, including in their game against Maryland – the only game against a Power 5 opponent on their schedule. Arkansas will be a clear favorite, but no one should take that for granted. It’s the NCAA Tournament. Upsets happen.

As a 4-seed, Arkansas will be likely be favored to advance to the Sweet 16. However, as the SEC Tournament proved, the opponents’ seed doesn’t matter once the ball is tipped. If it felt like the Hogs caught a break when Texas A&M upset top-seeded Auburn, those feelings were quickly dissipated when Arkansas needed 12 minutes of game time just to break single digits.

Razorbacks’ History as a 4-Seed

Arkansas’ history as a 4-seed is mixed.

Nolan Richardson’s first Final Four team in 1990 was actually a 4-seed (that team caught some amazing breaks on its way to the Final Four – because of some other upsets, they didn’t play a seed higher than 8 until they met Duke to end the season). The Razorbacks made the Sweet 16 in Corliss Williamson and Scotty Thurman’s freshman season in 1993, but fell to eventual champion North Carolina. The Hogs lost in the second round to 5-seed Iowa in 1999, ending the Kareem Reid/Pat Bradley/Derek Hood era.

There isn’t a clear favorite in this year’s NCAA Tournament. There is no undefeated team looking to make history, nor a team as dominant as last year’s Baylor squad that knocked off Arkansas in the Elite Eight on its way to the title. Gonzaga is the overall 1-seed, and they’ve lost three games (two of which were to St. Mary’s and an underachieving Alabama) this season. The same goes for fellow 1-seed Arizona. The other two 1-seed slots have seen teams move around all season in various projections because there have been lots of upsets.

Given that Arkansas is only a 4-seed due to the stretch in December and January before the team had figured out its starting lineup, there should be optimism that the Razorbacks can make a run in this tournament. The Hogs’ resume since implementing that lineup is comparable to a 1 or 2-seed.

While the Hogs have obviously been stellar at Bud Walton Arena over the last two months, it’s their performance away from Fayetteville that offers a better look at what the team is capable of on neutral courts without 20,000 screaming fans pushing them to another level. Arkansas won their preseason tournament in Kansas City back in November and then won five SEC road games. Four of those road wins came with the result never really in doubt. That also doesn’t include Arkansas’ win over 6-seed LSU in Tampa on Friday – a game in which LSU never threatened Arkansas in the second half.

In games that the Hogs lost on the road, the Hogs have still largely played well, nearly coming back from large deficits against Texas A&M (in January), Alabama and Tennessee. Even in Arkansas’ loss in Tampa on Saturday, the Hogs cut a 12-point halftime deficit to three before collapsing over the last ten minutes. This Arkansas basketball team shown they can take a punch and keep moving forward with or without a home crowd behind them.

Flaws for this Arkansas Basketball Squad

Arkansas has proven to be a great team over the course of the season, but like every other team, the Hogs are flawed. Many of the worst flaws the team has worked hard to overcome flared up again in the loss to the Aggies, particularly in the first half. The Hogs allowed Texas A&M to shoot over 50% from three. JD Notae got into foul trouble and struggled to get into rhythm. Arkansas turned the ball over too much, and some of those were completely unforced. Jaylin Williams, whose willingness to take more shots helped him achieve All SEC First Team status, was a non-factor offensively.

The nine combined points from Notae and Williams were a season low. Notae had reached double figures by himself in every game this season until the A&M game. As great as Stanley Umude and Au’Diese Toney were, scoring 38 of the Hogs’ 64 total points, it wasn’t enough. Arkansas needs more from its best players to advance far into this tournament.

One potential issue for Arkansas over which they really have no control is how the officials will call the game. In the first half of the game against Texas A&M, despite Notae’s foul trouble, the officials were very loose with the whistle. They only called 12 total fouls in the first half and only five on the Aggies. This allowed the Aggies to be more physical in their defense, and it led to problems for Arkansas. The Razorbacks did not match the Aggies’ physicality and it was part of what led to the early deficit.

This is not a complaint about the officiating but an observation. Much has been made of Arkansas’ success at the free throw line over the last couple of months, so when the officials call the game loosely, that means there will be fewer opportunities at the line. For comparison, officials called 30 fouls in the game against the Aggies, but 41 in the LSU game the day before, and a whopping 50 against Tennessee a week ago.

I don’t believe there’s a standard number of fouls that should be called in a given game, nor that both teams should be called for an equal number of fouls, but when games can be called with either 30 or 50 fouls means the rules are different in any given game. When games are called more loosely, Arkansas must be more aggressive on defense than they were on Saturday. Well, except for Notae, whom Arkansas needs to be on the court and in rhythm.

These are nagging issues that the Razorbacks must avoid if they are to make another deep run in the tournament. Vermont swept through their American East Conference tournament with an average margin of victory of more than 36 points per game. Clearly, they can get hot.

After that, the next likely opponent is UConn on Saturday. The Huskies beat 2-seed Villanova a few weeks ago and nearly beat them again in the Big East Tournament. Neither of these two are pushovers, and Arkansas will have to prove that the A&M game was a blip to make it back to the Sweet 16.

See our latest on Arkansas basketball and March Madness here: