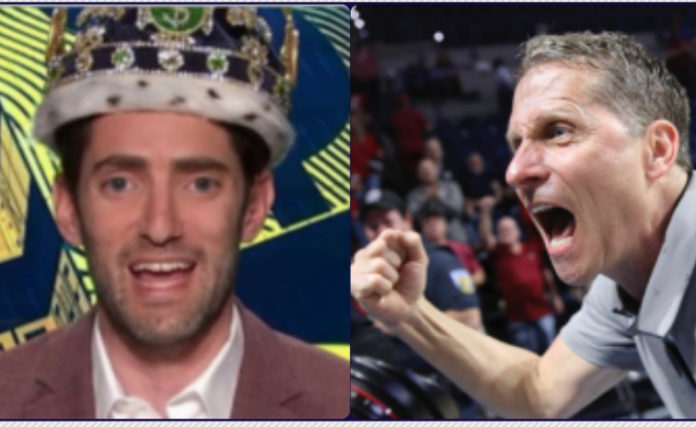 Nearly one year ago, a CBS Sports HQ analyst named Todd Fuhrman earned himself a plaque on the All-Time Wall of Razorback Dishonor when he insulted Arkansas basketball coach Eric Musselman’s coaching ability heading into a Round of 32 matchup with Texas Tech.

Fuhrman might as well have been applying clown makeup to his own face as he broadcast to the world that he felt Musselman and the Razorbacks couldn’t hang with Chris Beard and the Red Raiders:

Musselman didn’t take too kindly to this.

In the press conference after the 68-66 win over Texas Tech, Musselman shot right back: “I was alerted before the game about somebody at CBS who said something about the coaching matchup, so I was a little shocked we could actually win a close game, based on his comments,” Musselman said.

“Whoever that guy is, I’ve never heard of him in my entire life. So his credibility is absolutely zero.”

Musselman’s wife, Danyelle Musselman, also didn’t appreciate Fuhrman’s dig. “For whatever reason, this guy took a direct shot at Eric that was completely, it was ridiculous. And so, I’m not going to lie, I was irritated,” she said.

“There was a million things that you could say about my husband, but I don’t think anyone would ever say that he can’t coach.”

When It Comes to Arkansas Basketball, This Guy Never Learns

Grand Jester Fuhrman, perhaps to the surprise of absolutely no one, is back.

This time around, he’s not waiting until the second round to hunker down and let loose with a barrage of anti-Arkansas basketball fire. No. 4 seed Arkansas is favored by 4.5 points by Vegas and by some international casinos (you’d be amazed by all the free fun bonuses and spins they offer first-time users) against No. 13-seed Vermont in the first round of the 2022 NCAA Tournament, and it appears most of the CBS crew favors Vermont to pull the upset.

“I’m taking Vermont, plus the points,” Fuhrman said on a CBS NCAA Tournament preview show. “I think this is a team that can slow things down and really frustrate Arkansas. We know that the Razorbacks want to push tempo. They’re going to be the more athletic bunch, but Vermont is one of the most efficient teams in scoring the basketball.”

“Sure it’s tough to use the America East Conference schedule as a true litmus test for what it’s like when they step up in class athletically. But I think Vermont is an excellent upset candidate and it wouldn’t shock me at all.”

Also not a shocker: national pundits emphasizing Arkansas’ athleticism and vastly underrating the Razorbacks’ acumen and IQ (an issue dating back to the Nolan Richardson era). It’s as if they think Musselman just rolls the ball out there and assumes his players’ athleticism is going to win the day. They rarely bring up the strategic changes Musselman has made since Aransas lost to a less athletic Hofstra squad in late December. Given most national pundits have roots on the east coast or midwest, they again and again show their provincialism in situations like these.

This time around, it wasn’t just Fuhrman hammering away at the Hogs.

CBS’ Tim Doyle literally brought out a hammer on air and took his own whacks at Arkansas as he practically chiseled a verbal tribute to Vermont.

“I’m going to be hammering plus the points in this spot and I’m going to advance Vermont as well,” Doyle said. “I love the fact that, you know Ben and Jerry (also based in Burlington, VT) are going to be making the trip up to Buffalo with all these fans. Arkansas is going into a weird spot [where] could be cold.”

“Vermont, here’s who they beat in the non conference – Colgate won the Patriot. Yale won the Ivy. UNI, they won the regular season, Missouri Valley Conference.* Like we all know how well the Valley plays and you’re going to give me all these points added to better group. I’m trying to target experience here. If this game was maybe in a different location, I’d go, man Arkansas just has so many better athletes.”

*Doyle is apparently unaware that the Razorbacks beat UNI 93-80 earlier this season.

It’s not all slings and arrows when it comes to CBS and Arkansas, of course. Matt Norlander, who co-hosts a college basketball podcast with regular Razorbacks defender and Memphian Garry Parrish, is taking the Hogs – for now.

“This is Vermont squad is the number one defensive rebound team by rate in the country. And number three in effective field goal percentage. John Becker’s team has been on fire. Ben Shungu and Ryan Davis may be the best one, two mid-major combo in all of college basketball. If they’re not the best, they’re top three, without a doubt,” Norlander said.

“Arkansas has been good. Now it’s been great at home. Not quite as great away from home. I’m going to take Vermont to cover here. In the heat of this moment, I’ll take Arkansas to win, but check back on the Eye On College Basketball Podcasts frequently, because this is probably the toughest 4 vs 13 game for me.”

This is only the beginning of national pundits taking Vermont over Arkansas, folks. I’m not discounting Vermont’s impressive resume or the fact playing in Buffalo helps (as it would UConn in the following round). No doubt, these are worthy opponents who can beat teams like Arkansas.

What surprises me is that similar stereotypes to what plagued Nolan Richardson’s best team may be emerging for Arkansas basketball all these decades later, even under a new coach who is considered one of the best minds in the game.

That persistent lack of mention (synonymous to underrating in my book) of Arkansas’ IQ, fundamental skills and tactical acumen baffles me. It irked Richardson, too, as the Hogs geared up to play Duke in the 1994 national title game and pundits couldn’t keep from gushing over Duke’s intelligence. All those Hogs did was beat the Durham, N.C.-based Blue Devils to win the respect of the nation — for a little while, at least.

And where did all that go down? Charlotte, which is much closer to Durham than Buffalo NY is to Burlington, Vermont.

Todd Fuhrman starts raising the blood pressure of thousands of Razorback fans at 8:13 below. In a hilarious and slightly disturbing opener, he rags on co-host Tim Doyle: “Tim brings up Ben and Jerry’s from Burlington, Vermont, but he doesn’t mention the Vermont Teddy Bear Company because Tim got himself in hot water with countless co-eds during his various stops along the way before he became an honest married man.”

“So he was sending those teddy bears all over the country.”

Jay Bilas on Arkansas vs Vermont

Many ESPN commentators have fallen into lockstep with their CBS counterparts when it comes to this game.

A glimpse from an early preview show: “Although they [Razorbacks] are very athletic, but they don’t shoot it great, and Vermont does. Vermont runs five out offense. They take care of the ball. They’re very smart and they’re all seniors and Vermont dominated the America East. And I think they’ve got, with Ryan Davis and Ben Shungu, they’ve got a great opportunity to win that game.”

“Vermont doesn’t turn it over and the rebound the ball on the defense end. Obviously, Arkansas relies on turning you over and getting to the offensive glass because they’re not a great shooting team. Now they can create some match problems all over the floor. But what Vermont did in their conference tournament, they won by an average of 37 points a game. I mean they dominated.”

At first, Bilas didn’t actually pick Vermont. But a day later, on the “Bald Men on Campus” podcast, he succumbed to the forces of Darkness by picking against the Hogs:

“The upset that I see there is Vermont that plays five-out motion — setting a lot of ball screens, wide pins and they can really shoot it,” Bilas said. “I think they’re going to be a problem for Arkansas.”

More on Arkansas vs Vermont here: