Search
Home Arkansas Basketball Razorback News What’s On the Line for Arkansas When No. 1 Auburn Comes to... 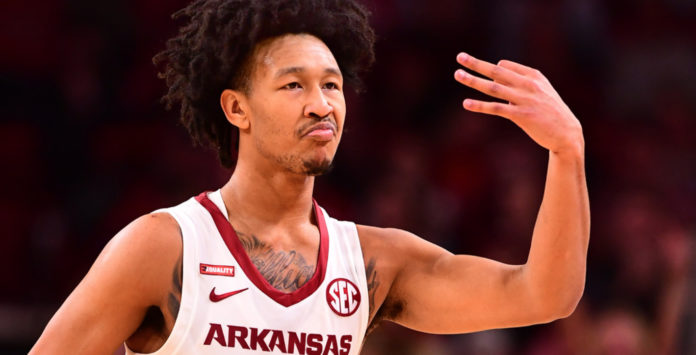 Arkansas doesn’t make it particularly easy, does it?

A certain cross-section of Razorbacks diehards will tell anyone who will listen about the stress of being a Hogs fan. Those folks are a bit like the people who say the phrase, “This is Arkansas. If you don’t like the weather, wait five minutes” as though the arbitrary lines we call state borders are impenetrable walls of atmospheric activity exclusive to their area. In other words, we get it, y’all. You love the Natural State and all its native sons and daughters.

Only the thing about those Arkansas fans over the course of the last, oh, 10 or so years is that, for once, their passive-aggressive bellyaching is actually justified. No athletic department in that span has gone through what the Razorbacks have.

The flip side to stress is we human beings only know it as stress if something in usual day-to-day life is pleasant. Stress is the counter to that. Arkansas basketball has provided a bit of both so far in the 2021-22 season. Tuesday night is just another opportunity for one side of the ledger or the other at 6 p.m. as Auburn visits Bud Walton Arena in an atmosphere so hype that it may imperil a world record for loudness.

The Tigers achieved their first-ever No. 1 overall Associated Press ranking in late January then nearly coughed it up on Saturday. Auburn needed a buzzer-beater to knock off SEC cellar-dweller Georgia, a team coming off a 26-point loss to Arkansas. Auburn will be the first team to ever enter Bud Walton Arena ranked No. 1 in the country. And if you don’t think those two Georgia games, back-to-back, are playing in the minds of those Hogs diehards, think again. Razorbacks Country believes in an upset.

And why not? Auburn has a 55% chance to win, but that isn’t exactly indicative of an expected blowout. Arkansas won its eighth straight game Saturday by beating Mississippi State in an old-fashioned slugfest reminiscent of the SEC’s staples in the late 2000s and early 2010s when a bulk of the league had fallen on hard times. The game may have been impossible to enjoy from an entertainment standpoint through 38 minutes and 30 seconds of its clock time, but it was also important for the Razorbacks as they move ahead.

What a Hogs Win in Arkansas vs Auburn Would Do

That Arkansas win was another bullet in the team’s proverbial NCAA Tournament gun. The Hogs’ non conference slate, outside of West Virginia in the Big 12/SEC Challenge (and even the Mountaineers are sitting on thin ice), did practically nothing to bolster their Big Dance odds. Kansas State and Cincinnati are well off the bubble and Oklahoma, which blasted Arkansas to start the Razorbacks’ December doldrums, is only barely on it. In short, Arkansas basketball coach Eric Musselman’s team needed to tuck away victories in the early part of the SEC slate to have any chance.

Auburn is the first of seven opponents Arkansas will face in its final eight regular-season games that has eyes on postseason basketball. In fact, those seven are likely to get into the NCAA Tournament, too. The sledding will be rough for the Razorbacks down the stretch. Beating the No. 1 team in the country, though? That would be a large enough spoil to almost certainly lock the Hogs into March Madness, just like Arkansas’ huge win over No. 2 Auburn in 1999 sealed the deal. Only a collapse of epic proportions would keep Arkansas away.

As much as teams and their coaches say ‘we’re only worried about the next one,’ it’s a short-sighted approach for anyone else to take. And when playing the top team in the country, both sides of the coin are apt. Losing to Auburn wouldn’t destroy Arkansas’ chances by any means. Beating Auburn would give breathing room for a loss or two in the final month.

Heck, ask Alabama what beating top-ranked teams will get you. The Crimson Tide own wins over then-No. 3 Gonzaga, then-No. 14 Houston, then-No. 14 Tennessee, then-No. 13 LSU and then-No. 4 Baylor. They also have losses to Iona, Missouri and Georgia and sit at 4-6 in SEC play. Nate Oats’ bunch is a projected No. 5 in ESPN’s latest Bracketology.

Forget losing, though. Arkansas was picked to finish third in the SEC in the preseason because of its talent. JD Notae has played up to expectations, if not slightly exceeded them, in being the No. 2 scorer in the conference and top steals man. Jaylin Williams has established himself as one of the league’s top bigs in the last month, too.

Au’Diese Toney and Stanley Umude have developed into the type of secondary scorers and all-around players every roster needs. Kamani Johnson and Trey Wade have brought beef into the frontcourt. Chris Lykes and Devo Davis, despite often maddening inconsistency, have so much athleticism they can change a game in an instant. Outside of Notae, there is no bonafide star in the traditional sense and the team is one of the worst in the country from beyond the arc. Yet here they are, having listened to their coach, changed their approach and now picking up velocity as one of the hottest teams in the country.

On Tuesday night, The Basketball Palace of Mid America, one of the rockingest buildings in the land, will ensure the top-ranked Tigers get every bit they can handle.