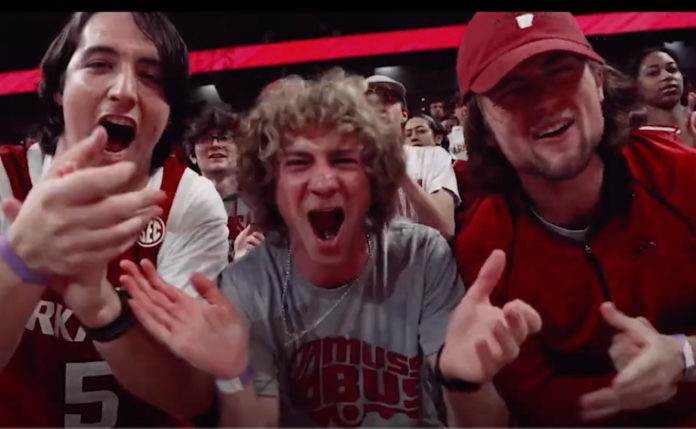 The Razorbacks are hot off the heels of their eighth straight victory, this time a home win over Mississippi State on Saturday. The win puts Arkansas at 18-5 (7-3) on the season, but their next challenge projects to be their toughest so far as No. 1 Auburn comes to a raucous Bud Walton Arena that could set a new world record on Tuesday evening (more on that below). The Tigers are 22-1 (10-0) on the season, including 19 consecutive wins. Their only loss this season came to UCONN, ranked 18th in the NET Rankings, on a neutral court back in November as they fell 115-109 in double-overtime.

Despite the win streak, the Razorbacks are still unranked in AP Top 25 poll released on Monday. They got the the second-most votes among unranked teams, behind Wyoming.

Most recently, Auburn narrowly escaped a massive upset defeat in Athens at the hands of the Georgia Bulldogs on Saturday. A layup from sophomore guard Wendell Green gave the Tigers a lead with 0:05 left on the clock, ultimately sealing their road victory. Though Auburn came away with their 22nd victory of the season in the close call, perhaps the Bulldogs reminded the rest of the world that the Tigers are not, in fact, invincible.

What to Expect When Auburn Has the Ball

Auburn is led by freshman Jabari Smith on both sides of the ball. At times evoking a young Kevin Durant, Smith averages 15.3 points, 6.7 rebounds, 1.8 assists, 1.3 steals, and 1.1 blocks per game while shooting 44% from the field, 40% from 3-point range, and 80% from the free-throw line. The 6-10 forward is not only in contention for SEC Freshman of the Year, he’s also a frontrunner for SEC Player of the Year alongside Kentucky’s Oscar Tshiebwe and Arkansas’s JD Notae.

Jabari Smith is a strong candidate to be the No. 1 overall pick in the 2022 NBA Draft, but he didn’t help his case any in his last outing. Against Georgia, he was held to only seven points on 2-7 shooting from the field despite playing his fifth-most minutes (31) in a game so far this season. Prior to his poor shooting performance against the Bulldogs, the freshman forward had scored double-digits in 19 of his last 22 games on over 44% from the field, including seven games scoring 20 or more points.

Arkansas’ ability to limit Smith through the defensive capabilities of their supersize lineup consisting of four forwards alongside JD Notae will have a major impact on their chances of pulling off the upset victory. Since switching to this extra-tall starting lineup eight games ago, Arkansas has held opponents to a combined 37% from the field and 28% from distance. They’ve held seven of their last eight opponents to below 40% from the field and 31% from 3-point land.

Auburn’s offensive game plan is often set into motion by sophomore guard, Wendell Green. Though he played the hero in the Tigers’ win over Georgia, the 5-11 floor general does most of his damage as a playmaker, averaging nearly five assists per game to go along with his 13 points and 33% 3-point shooting. He’s joined in the backcourt by Auburn’s second-leading scorer and fellow sophomore guard, K.D. Johnson. The 6-1 guard averages 13.5 points to go along with a team-leading 2.1 steals per game. Despite playing for Georgia last season, Johnson didn’t make his season debut until January 13th, 2021, against Auburn – four days after the Bulldogs lost to Arkansas in Fayetteville.

Walker Kessler could prove to be the deciding factor in this matchup between the Hogs and the Tigers. Standing at 7-1, the sophomore averages over 74% shooting inside the 3-point arc and 4.2 blocks per game – the most by an SEC player since Anthony Davis averaged 4.7 in 2011-2012. Kessler will likely give Jaylin Williams all he can handle on both ends of the court, as well as freeing up his 6-10 teammate Jabari Smith to be guarded by someone a few inches shorter, such as Trey Wade (6-6), Stanley Umude (6-6), or Kamani Johnson (6-7) for stretches.

At roughly 7-3, junior center Connor Vanover has appeared in only 14 games for the Hogs this season – four SEC games – but hasn’t seen the court in any of the Hogs’ previous five games. It could be worth a shot for head coach Eric Musselman to insert Vanover into the game to help mitigate the sheer length of Auburn’s frontcourt and paint presence. However, the big man has been known as a shooter and offensive threat throughout his college career up until this season. He is currently shooting 44% from the field and 8% from behind the arc. If his confidence is not in a good place, the lack of offensive efficiency might overtake any positives he brings to the defensive side of the ball. Vanover getting minutes against Auburn would likely be an in-game adjustment if the Tigers are continually hurting the Hogs in the paint.

Another name to keep an eye on is 6-6 junior, Allen Flanigan. The then-sophomore guard averaged 13 points in two games against the Hogs last season. Flanigan is a Little Rock native and son of former UALR coach, Wes Flanigan, and grandson of Parkview coaching legend, Al Flanigan. This season, the junior guard is averaging 7.1 points and 3.5 rebounds in 11 games played.

Auburn will potentially be dealing with a pair of injuries as they travel to Northwest Arkansas on Tuesday night. Junior guard Lior Berman, who averages 2.7 points on 50% 3-point shooting during 10.5 minutes per game, has missed the Tigers’ last seven games with a foot injury. Zep Jasper, a senior guard averaging roughly five points and 23 minutes per game, has also been labeled as questionable for the Razorback game with an unspecified illness. He missed the Tigers’ game against Georgia.

For the second consecutive game, Chris Lykes turned in a stellar performance in his role as Arkansas’ backup point guard. He scored 10 points in 20 minutes of action, including a timely – though arguably ill-advised – triple with 25 seconds left to push the Hogs’ lead over the Mississippi State Bulldogs out of reach. Musselman recalled his thoughts on the late-game triple post-game, saying “Chris’ [shot], maybe you try to run some more clock, but that’s kind of who he is. I mean, we knew recruiting him that he’s got this dynamic flair to his game. And he’s had a different approach as well the last couple of games.”

In Lykes’ last two games, he’s accumulated 19 points, 9 assists, 6 steals, 3 rebounds, and only 1 turnover in 39 minutes of action. The undersized guard could be a difference-maker down the stretch if he continues to be a secondary ball-handler behind JD Notae.

Jaylin Williams may not have lit up the stat sheet in his last outing, but he once again provided game-changing plays with multiple charges drawn, nine rebounds, and a timely 3-pointer in the midst of a Mississippi State run late in the game. The sophomore forward’s emergence has been arguably the biggest factor in the Razorbacks’ current win-streak, and his ability to combat the impressive Auburn frontcourt duo of Smith and Kessler will be vital in the Hogs’ upset attempt.

Then there’s JD Notae. If there was ever a time for a season-defining performance from the Arkansas basketball star, it’s against the #1 team in the nation on his home court. The senior guard is averaging 20.1 points per game on the season to go along with 4.8 rebounds, 4.2 assists, and an SEC-leading 2.1 steals per game. In his last three games, Notae is averaging 21 points on 47% 3-point shooting. Auburn has allowed its last 10 opponents to shoot a combined 33% from distance, leaving the door open for Notae to have another good shooting performance against the Tigers.

Georgia’s Kario Oquendo had a 25-point outing in his last game against Auburn. As the Arkansas basketball staff has no doubt studied on tape, Oquendo did most of his damage through attacking the defense, leading to a season-high 14 two-point shot attempts and eight free-throw attempts, his third-highest total of the season. Notae would do well to stay relentless in his attack and not settle for too many 3-pointers unless he gets hot early on.

Arkansas vs Auburn: What to Watch For

To go along with their dangerous frontcourt duo, Auburn does an exceptional job of taking care of the basketball. They are 2nd in the SEC in fewest turnovers per game at 12.4 and allow the 2nd fewest steals to opponents at roughly seven per game. For reference, Arkansas averages 8.7 steals per game, good for 4th in the SEC, and allows 8.4 steals to their opponents, good for only 11th in the conference.

In a game featuring big names like Jabari Smith and Walker Kessler, the turnover battle will be as important as ever if the Hogs want to keep their upset chances alive. Prior to the Razorbacks’ current winning streak, they forced opponents into 14.7 turnovers per game. During their last eight games, they’ve forced opponents into 16.3 turnovers per game, largely thanks to their new defensive-minded lineup led by the forward trio of Au’Diese Toney, Trey Wade, and Jaylin Williams.

ESPN’s BPI gives Auburn a 56% chance of defeating the Hogs in Fayetteville, AR. Arkansas has won six of its last ten matchups against the Tigers, including the last two in a row making them 2-1 under coach Musselman. Bruce Pearl, however, is the only Auburn coach to ever secure two wins in Fayetteville.

Riding recent momentum and the roar of an energized Bud Walton Arena, the Razorbacks will put up quite the fight against the Auburn Tigers. In fact, with the number of students who could pack the arena on Tuesday, this has the potential to unseat the current world record holder for loudest roar in an indoor arena: Kansas basketball’s Allen Fieldhouse during a 2017 game vs West Virginia:

JD Notae will lead the way offensively, as Hog fans have grown accustomed to, scoring more than 20 points for the eighth time this season. The combined presence of Arkansas’s plethora of forwards will limit Smith’s efficiency, but      Auburn’s sheer size and talented guard play will ultimately prevail. The Tigers will narrowly escape defeat for the second game in a row despite a valiant effort from the Razorbacks.

How to Watch Arkansas vs Auburn