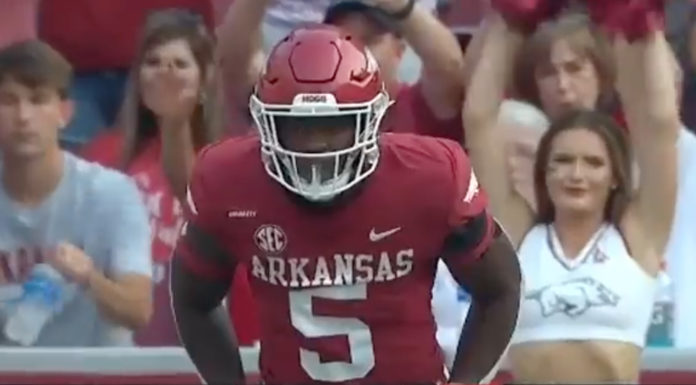 It may be difficult for fans to fairly judge a player’s potential on his own merits because they see the jersey number and immediately compare them to the player that made their jersey number famous.

After Rakeem Boyd, Raheim “Rocket” Sanders is only the second running back to wear No. 5 since McFadden in 2007. If his freshman season is any indication, he’ll demand that fans give him a chance to make a name for himself despite his jersey number.

His freshman numbers are even more impressive when you consider that Arkansas basically used a committee of running backs throughout the season, with no clear RB1. On top of that, starting quarterback KJ Jefferson was also a threat running the ball, finishing with 664 rushing yards on the season.

Trelon Smith, A.J. Green, Dominique Johnson and Rocket Sanders all shared the workload through the first part of the season. Johnson, who finished the season with 97 carries for 575 yards and seven touchdowns, was eventually named the starter following a win against Arkansas-Pine Bluff.

Sanders was listed as Johnson’s back-up, in name only, as the two would split the majority of the carries the rest of the season.

Through the first six games of last season, the Sanders-Johnson duo averaged 13.5 carries per game which was about 30% of the team’s total rushing attempts.

Over the final seven games of the season, the duo averaged 18.5 carries per game and an increase of about 42% of the team’s total rushing attempts.

Entering spring practice, Sanders and Johnson were both going to have the chance to show they were worthy of being “the guy” at running back this season. Both had made strong claims, as the “running back by committee” approach worked for the Arkansas offense for the first part of last season.

Once the offense shifted to splitting carries between Sanders and Johnson exclusively, it continued to hit on all cylinders.

Over the second half of the season, the Arkansas rushing attack was still able to maintain the season average of 200+ yards-per-game while only using two running backs alongside Jefferson.

The Outback Bowl against Penn State was a master class in wearing down your opponent with the running game. Sanders and Johnson combined for 156 yards of the 353 total yards rushing and two touchdowns in the win. Sanders shined as Johnson’s primary backup and even finished the year with more yards than Johnson.

Following the success of the one-two punch of Sanders and Johnson last season, the question was whether one of the two would take a leap this offseason to earn the title of RB1 outright.

Spring practices were expected to be our first glimpse at which of these two had taken a bigger leap in the offseason so far.

Unfortunately, Johnson needed offseason surgery which kept him out of all spring activities.

Sanders, who was originally recruited as a wide receiver but moved to running back after last spring, went through his first full spring as a running back taking the majority of the first team snaps.

Despite battling an injury of his own this spring, Sanders impressed with his improvement from last season.

“He’s turned into a running back,” Pittman said. “He told me at some point he was just wondering about his assignment as he’s running the ball. Now, you can see that he understands what his rule is. He seemed to be quicker in making decisions to me.”

That last part of Pittman’s quote is important.

At 6’2” and a very stout 225 pounds with elite speed and agility to leave defenders in the dust, Sanders is the most physically gifted running back on the roster right now:

Where Rocket Sanders Must Improve

For every impressive run Sanders had, like his first career touchdown against Texas, there was a mistake that held him back, like the fumble against Ole Miss.

Those mistakes aren’t uncommon from freshman running backs, but when other running backs don’t make those mistakes, they become amplified. It makes it harder for a coach to play you over a safer option.

Dominique Johnson isn’t necessarily the biggest or fastest running back, but he’s a very hard runner who takes care of the football. That helped him earn the trust of the coaching staff, which also earned him the starting job last season.

“You know the bottom line is whoever you run out there with the first group, those guys are supposed to be your best players at the time they’re running out there,” said Pittman, after naming Johnson the starter for the Mississippi State game last season. “I certainly think Dominque has earned that right.”

Johnson is going to get a chance to prove he’s worthy of being the starting running back once he returns from injury, but Sanders is going to make it difficult. Sanders needed to show growth in his decision-making and ball control after last season. While at the same time, he needs to be the same hard runner who can make people miss at every level of the defense.

According to quarterback KJ Jefferson, Sanders has done exactly that this spring.

“He (Sanders) knows what’s going on now, he knows in protection,” said Jefferson. “He’s talking to the O-line, communicating and making sure they know what they’re doing so he can react off it. All in all, on the field, he’s focused.”

Make no mistake about it, Johnson is no slouch as a running back. Even if he isn’t named starter, he should see his fair share of carries.

That being said, Sanders is the more dynamic of the two.

Above, you can see Sanders create separation, then comes back to the ball and makes the tough catch like a skilled receiver. If Sanders continues to showcase the same improvement we saw this spring, it will be hard to deny him the majority of the carries this season.

Sanders has already met, if not slightly exceeded, best-case expectations for his freshman year. Especially considering he was originally recruited to play wide receiver, but didn’t move full-time to running back until last fall camp.

At the time, few predicted he would make the SEC All-Freshman team. Beau Wilcox, a fellow writer here at Best of Arkansas Sports, wrote that Sanders could become an X-factor in 2021, with a role similar to that of 2005 from then freshman Felix Jones.

However, after last season, I think a role like Felix Jones’ in 2005 is the floor for Sanders and his potential.

Sanders and Felix Jones both have elite speed that can make defenders miss anywhere on the field.

One major difference between the two is that Sanders is 6’2” and weighs 225 pounds. Jones was 5’10” and weighed 215 pounds when he played.

For more perspective, Darren McFadden is the same height as Sanders but weighed 15 pounds lighter when he played.

It almost seems like Sanders is a Jones/McFadden hybrid, even though it was his counterpart, A.J. Green, who received those comparisons when he first committed to Arkansas.

Now, I’m going to stop short of saying that Sanders is on the same level as those two legendary Arkansas running backs. He has a lot left to accomplish before we could even think of having that type of conversation, but he does have similar physical gifts that McFadden and Jones each possessed.

If Sanders can put everything together, we could be looking at the next great running back in Arkansas football history.

Sam Pittman has made it known that he wants the running game to be part of Arkansas football’s identity under him.

The offensive line is returning all but one starter from its entire two-deep. This could be the biggest and best offensive line Arkansas has had since Bret Bielema’s tenure.

McFadden and Jones were exceptionally talented, but they also had an incredible offensive line to open up holes for them. Sanders is no different and is going to need help from his lineman if he wants to have a breakout season.

Sanders will have plenty of opportunity to showcase his abilities this fall. What happens with those opportunities is to be determined.

It may be difficult for fans to fairly judge a player’s potential because they see the jersey number and immediately compare them to the player that made their jersey number famous.

Sanders will be wearing that famous No. 5 jersey and will continue to get comparisons to McFadden because of it. The better he plays, the more the comparisons will come rolling his way. That worked out great for Rakeem Boyd, up until his senior year when injuries caused his career to close with a whimper instead of a bang.

Chances are that Sanders won’t quite reach the same stratosphere that McFadden did while donning the No. 5 jersey, considering McFadden racked up more yards than any other SEC running back in his first three college seasons. But that shouldn’t matter. Rocket Sanders should be allowed a chance to make a name for himself, without the expectations that come with that famous jersey number.

Only time will tell if Rocket’s trajectory is in the same orbit as other Arkansas greats – like McFadden, Jones, Peyton Hillis and Cedric Cobbs – or if it’s a little more down to Earth.

One thing that is certain is that the football season can’t get here soon enough. 82 days and counting.