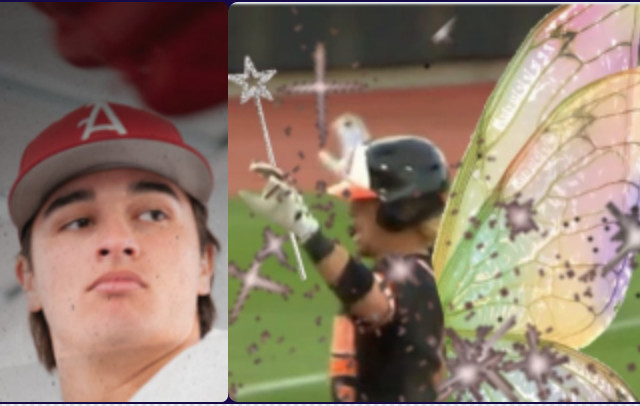 Twelve of the last 13 college baseball national championships have featured a team from the SEC. Considering four of this year’s eight teams are from what is clearly the best baseball conference in the land, the odds of it becoming 13 of 14 are more than strong.

That’s good news for Arkansas. This season, the Razorbacks came within a game (and a tiebreaker) of winning a fourth straight SEC West crown. They’ve already taken series from two of the other three league rivals and familiarity with Stanford, who they incidentally play in the first round Saturday, can only help, especially as the no team in the Dance has a coach as experienced in the College World Series as Dave Van Horn. DVH will be making his ninth trip to Omaha, Nebraska, for the eight-team tournament.

Arkansas baseball has been one of the best teams in college baseball since the late 1970s when former coach Norm DeBriyn led the Razorbacks to the national championship game in 1979. Three more trips to Omaha under DeBriyn followed. Van Horn picked up pace even further when he was hired before the 2003 season. The Diamond Hogs have only failed to make the NCAA Tournament only once under his watch. No other team playing this weekend at Charles Schwab Field can claim to have that level of dominance and consistency.

Yet the Hogs have never won a national championship. The thing is, only three of the eight teams in this College World Series have, even though it’s loaded with blue-bloods. Stanford, Texas and Oklahoma have titles, though only the Cardinal and Longhorns have more appearances in the CWS than Arkansas To only a modest fan of the sport, about the only team that, quote-unquote, doesn’t belong is Notre Dame. Every other squad has established itself as a powerhouse over the course of the last 20 years. But even the Fighting Irish had a run in the late 90s and early 2000s in which they were regulars in the NCAA Tournament.

The point: Arkansas has as good a chance as ever.

What Matters in the College World Series

The aforementioned is all history. The truth is that history almost never matters. Not ancient history, anyway. And when it comes to college sports, just about everything before four seasons ago qualifies as ancient history because that’s the standard staying time for players on a roster (at least it was before the extra COVID-19 year).

Take this year’s Hogs, for instance. Arkansas last played in the College World Series in 2019, which was, technically, only two seasons ago thanks to the 2020 season being washed-out because of COVID-19. But not a single hitter on the 2022 Diamond Hogs roster was a part of the team that played that season. The team’s only holdovers are pitchers Connor Noland, Evan Taylor, Elijah Trest and Kole Ramage. Noland and Ramage were the only regulars.

But three calendar years make a difference. Back in 2019 Noland, the tall right-hander, was balancing his  baseball career with football, where he was a quarterback. He’s since quit the latter and established himself as a bona fide No. 1 SEC starter, racking up a 3.75 earned-run average with 105 strikeouts in 100 1/3 innings. Taylor leads the team with 30 appearances out of the bullpen while Ramage is second with 29.

Arkansas’ lineup has the sticks to do damage, too. After all, the Razorbacks were a part of the Stillwater Regional and helped set the record for most runs scored in an NCAA Tournament regional. Third baseman Cayden Wallace and second baseman Robert Moore are projected to be Top 150 picks in the MLB Draft next month. Wake Forest transfer Chris Lanzilli and Kent State transfer Michael Turner are first and second in batting average. And Jalen Battles’ consistency at shortstop has been a blessing both in the box and on the field.

The Air Around Arkansas Baseball

Consider, too, the air around the team. Believers in momentum have to think the Diamond Hogs have it. Every game since they were eliminated in the SEC Tournament has been tinged with a sort of fairy dust. Maybe it was the team getting away from the expectations of playing in front of a home crowd and excelling in an “us-vs-the-world’ type of mentality that was only bolstered by the Michael Turner-Derek Ruscin controversy. Maybe it was Oklahoma State’s Roc Riggio losing some of his fairy dust while preen-dancing to third base, and somehow that magic getting absorbed by his Razorback competitors.

Whatever the reason, the Razorbacks have looked more like the team that spent three-quarters of the year ranked inside the top 10 than the team that stumbled to a 4-6 record to finish the regular season and went two-and-out in Hoover.

They recall the feelings of last year, too, losing to upstart North Carolina State at the Fayetteville Super Regional after being ranked as the top team in the country practically all season long. That redemption has already come, albeit against the other major state school in N.C. Other teams have had their share of heartbreak, certainly, but little has matched the drama surrounding Arkansas baseball over the last 365-ish days.

All factors add up to major potential. The Razorbacks won’t enter the College World Series as the favorites. In fact, they’ll likely be picked to lose in their opening game against the highest-ranked team remaining in the tournament.

But, at this point, with all signs pointing to magic, I’m not betting against them.

Here’s who the Omaha writers are taking to win the College World Series: