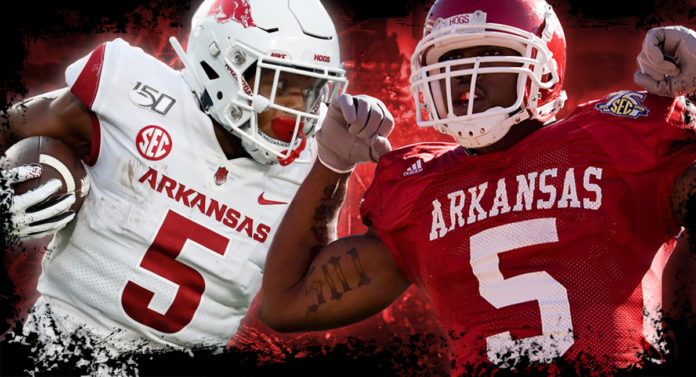 Let’s get this out of the way right here, right now: Rakeem Boyd’s no fool.

The star Razorback running back knows that Darren McFadden’s place as the top runner in Hogs history for an entire career is fairly secure. While Boyd has rushed for has 1,867 rushing yard in two seasons, McFadden rushed for 4,590 yards in three seasons during his illustrious Razorback career. McFadden also racked up two Heisman runner-up nods, 25 All-American selections, two Doak Walker Awards and two SEC Offensive Player of the Year Awards.

“I got mad respect for him,” Rakeem Boyd said of his friend D-Mac on “The Hog Pod.” “But then again,” Boyd added, “we both know how each other are and I want to go down as one of the best.”

Boyd’s off a good start in that regard.

In 2019, Boyd rushed for a team-leading 1,133 yards on 6.16 yards per carry. He has the third-highest rushing yards per attempt average in Arkansas history, behind only Felix Jones and Matt Jones.

Boyd, however, feels the best is to come.

The senior gotten into the best shape of his life this season and is primed to have an all-time year behind an improved offensive line coached by position coach Brad Davis and new head coach Sam Pittman, who had long been considered one the nation’s top offensive line coaches.

Moreover, he is now playing alongside perhaps the best quarterback of his career in Feleipe Franks, a former starter at Florida with a cannon for an arm. With the help of a stellar receiving corps, Franks is expected to stretch defenses— and open up running lanes — at a level not seen in years.

Adding fuel to the fire of what Rakeem Boyd and this Hogs offense could unleash is new offensive coordinator Kendal Briles, who masterminds a high-tempo offense predicated on spacing and creating favorable box numbers for a versatile run game that put up video game-like numbers at Baylor.

Boyd thinks the offense could be good enough to shatter last year’s output.

“No offense to anyone and no offense to Darren McFadden, but I hope to go down as the best running back that ever played” at Arkansas, Boyd said. He then clarified he’s talking about being the best for a single fall — “this year, in one year. You know what I mean? I don’t know what’s going to happen, but I know I’m trying to go down as one of the best backs to ever play.”

No question, Rakeem Boyd has a shot at moving into the consideration of one of the top five running backs in UA history. That’s would be quite an accomplishment considering ESPN voted Arkansas as the nation’s top “Running Back U” just six years ago.

McFadden, for his part, wants to see Boyd succeed. “I love watching what he do on the field and being the bright spot on our team for the last couple of years,” McFadden said “Out of Bounds” on The Buzz 103.7.

To achieve the best single season in UA history, Boyd doesn’t have to eclipse D-Mac’s single-season record of 1,830 yards from 2007. Darren McFadden did that over the course of 13 games. Four of those foes were FIU, Chattanooga, Troy and North Texas. Arkansas’ SEC East opponents were Tennessee (then ranked No. 24) and an unranked Kentucky.

Boyd, meanwhile, gets only 10 games to make his mark this season (unless Arkansas makes a bowl game). With an SEC-only slate, he also doesn’t get the benefit of any non-conference opponents. Plus, Arkansas’ two SEC East opponents are beasts — No. 5 Florida and No. 4 Georgia.

If Rakeem Boyd averages more than 100 yards a game against the hardest schedule in college football history, it will be a hell of an achievement. If he’s able to go for, say, 1200 yards, he will challenge D-Mac for the best single season by a Razorback tailback, all factors considered.

The good thing is that the season for talk is finally finishing.

This Saturday, against Georgia, we’ll know for sure how ready these Hogs are to roll.

Boyd, for his part, may be more excited than the fans. “I love ball so much I can’t even sleep right now,” he said earlier this week. “It’s a blessing that we’re just getting through all of this and get to showcase what the Razorbacks are really about. I’m ready for y’all to see what we have in the tank.”

What does Boyd think about carrying on the legacy of learning the same No. 5 that McFadden did?

Rakeem Boyd has told Mcfadden it means a lot to him. And on the “Hog Pod” Boyd told Bo Mattingly; “He’s probably one of the best backs I’ve seen wear five. So, it’s an honor to wear those jerseys on Saturdays and get to play in it and running back too. It’s a big honor.”

Would McFadden like to see the No. 5 retired at Arkansas?

Once Boyd leaves school after this season, yes.

“I will definitely start trying to make that push a little more and try to retire it,” he told John Nabors on “Out of Bounds.” ” I feel like there is so much history, just with the things I’ve done with number five for the University of Arkansas. It’s big shoes to fill man, for sure.”

“I definitely would try to press to have it retired if I can. But like I say, right now, I love watching what Rakeem Boyd does. And being able to be a fan of him, I like watching him wear it. I would definitely try to make a push for it after he leaves.”

Listen to the entire Darren McFadden interview on “Out of Bounds: here:

Boyd’s isn’t the only current Hog who’s a fan of D-Mac’s: