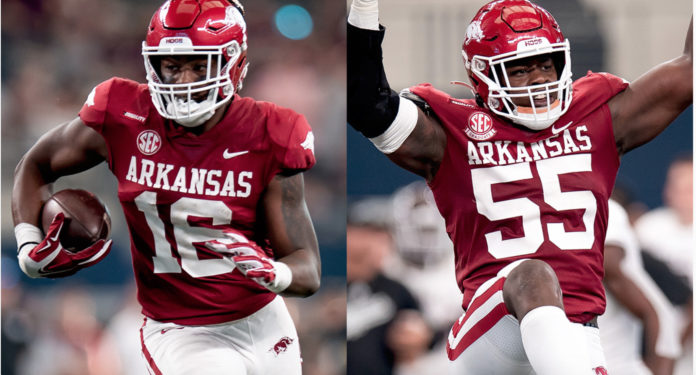 Arkansas’ Outback Bowl bid is a big deal among Hogs fans. After enduring disappointment and utter misery for 10 years, Sam Pittman is righting the ship and surpassing expectations with an 8-4 regular-season record and a New Year’s Day bowl in sunny Florida.

It’s definitely worth celebrating. The only blemish on the accomplishment was the announcement that junior star receiver Treylon Burks is opting out of the bowl game and declaring for the NFL Draft. Not great news, but it could be worse.

And, in fact, for other programs it often is worse. Just look across the college landscape to see how many programs are losing multiple key players to opt outs. Notre Dame will be without highly regarded safety Kyle Hamilton and running back Kyren Williams in the Fiesta Bowl matchup with Oklahoma State. SMU will be without receivers Reggie Roberson and Danny Gray when the Mustangs play Virginia in the Fenway Bowl.

Projected No. 1 NFL Draft pick Kayvon Thibodeaux who will skip Oregon’s Valero Alamo Bowl games with Oklahoma. Michigan State star and Michigan State running back Kenneth Walker III opted out of the Spartans’ Peach Bowl game against Pitt, as did Panthers quarterback Kenny Pickett. There are plenty more, but you get the idea.

There was a time when a star player wouldn’t think about missing a game as important as a postseason game. Back then, the swag bag filled with clothes and a video game console was impressive. I remember one former Arkansas football player told me he carpooled with a few teammates to collect extra travel money instead of flying with the team.

Now, with the introduction of NIL deals, I’m sure more than a few players already have the hard-to-get PS5. Plus, a sweatsuit with the Cotton Bowl logo in it barely moves the meter when your closet is full of trendy clothes.

I imagine former Hogs tight end Jeremey Sprinkle, who now plays with the Dallas Cowboys, wouldn’t have had to shoplift at the team shopping spree ahead of the Belk Bowl five years ago because an NIL deal would have kept his wallet full.

While standout lineman Tre Williams did recently join Treylon Burks on the short list of notable Razorback opt outs, it appears his reasoning was mostly to save face after a DUI arrest. So, had that not happened, he likely would have still played. On the whole, Arkansas has probably had less opt outs because this sudden success is so welcomed and new. Most of the players on the roster haven’t played in a bowl game. It’s exciting and novel. But, what happens next year if the Hogs’s tough schedule knocks them to 6-6 or 7-5 and the game isn’t as exciting? What about the year after that?

I know what you’re likely thinking: “The Hogs will be even better and play in a New Year’s 6 Bowl.” That very well could be and – spoiler alert – I will pick Arkansas to beat Cincinnati in the season opener next year. But there were all kinds of reasons for Ole Miss quarterback Matt Corral to opt out in the Rebels’ upcoming Sugar Bowl against Baylor so the notion that if the bowl game is higher-tiered players won’t opt out isn’t necessarily true. A player will at some point.

Burks’ declaration also didn’t go unnoticed. There are many players on this team who look up to him. The fact that a respected player like him left sets the precedent for others to follow in the future knowing that Burks is a highly respected for his loyalty to the program, but still thought of himself and an NFL career instead of staying at Arkansas through the Outback Bowl on January 1.

The opt outs are exactly why bowl games should be replaced by an expanded playoff format. A 12-game or 16-game playoff would mostly prevent them and make postseason games way more interesting. I have heard the arguments that the games wouldn’t be as competitive and that players would miss too much class. Nonsense. The games would be much more intriguing than watching two 7-5 teams play in Shreveport, La. in mid-December. And since when has anyone cared about academics? How many classes do NCAA Tournament teams miss? Plus, many of these games would take place during Christmas break.

In the new climate of college athletics where players aren’t exactly “amateur” anymore, a trip to a warm place and going to amusement park and zoos and eating a steak with the opposition isn’t much of an incentive. There is more money to be made, and maybe lost. Unless there is a wad of cash in the swag bag, more and more players will opt out and less and less fans will travel and opt into watching on television instead.

College football is rapidly changing. Unless administrators and powers that be more quickly change with it, fans, including the Razorback faithful, are going to be very disappointed.