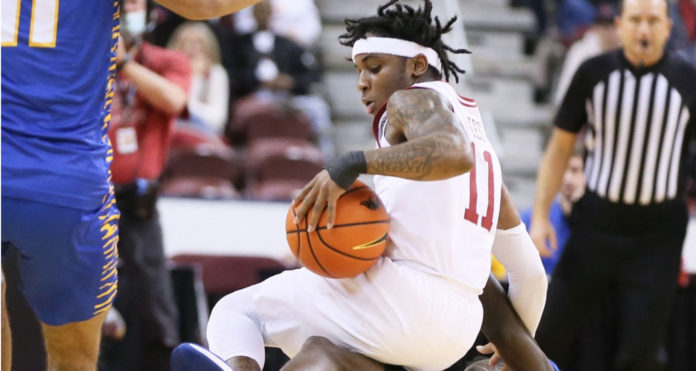 With their backs against the ropes, Arkansas returns to their home court in Bud Walton Arena on Tuesday night at 6:00 pm to face the Elon Phoenix. Ironically, though, it’s the Hogs who need to rise from the ashes after dropping consecutive non-conference games for the first time under head coach Eric Musselman. Despite an uptick in their team 3-point percentage in Saturday’s loss to Hofstra, the Hogs have now allowed 88.5 points per game over their last two contests compared to only 73.5 points scored per game. They look to end this poor stretch of play in their final non-conference game before SEC play starts.

When Elon Has the Ball

The Razorbacks’ next game holds promise for a rebound in the win column as well as their confidence. Elon is 3-9 on the season and 0-4 away from their home court. They have shown two strengths so far this season: 3-point shooting and free throw percentage. Despite ranking 232nd in points scored per game, the Phoenix are making just under 10 3-point attempts per contest, ranking them 35th in the NCAA. They also rank 64th in 3-point percentage at 36.6% as a team. Their efficiency from the free-throw line (75.5%) has them sitting at 44th in the nation as well.

Arkansas will once again be challenged with what has become a common theme for them this season – defending the 3-point line. Four different Elon players average at least 3.8 long-range attempts per game. Of those four players, two are shooting at least 35% from distance: 6-5 guard Zac Ervin and 6-2 guard Hunter McIntosh. McIntosh and Ervin are 1st and 4th on the team in scoring as well, contributing 11.3 PPG and 10.4 PPG respectively. If Arkansas can run shooters off the 3-point line and keep Elon off the charity stripe, they stand a good chance of ending their losing streak.

Arkansas basketball coach Eric Musselman toyed with a new starting lineup against Hofstra, inserting KK Robinson into the point guard position and bringing JD Notae off the bench in the sixth man role he grew accustomed to last season. While Robinson saw only four total minutes of action, the change couldn’t have come at a better time for Notae. The reigning SEC Sixth Man of the Year shot 4-9 (44%) from distance against Hofstra, his best shooting performance since the Hogs’ win over Gardner-Webb on November 13th, a game in which Notae shot 4-7 (57%) from long range. Arkansas as a whole combined to shoot 12-31 (38.7%) from distance, their best shooting game as a team since their win over Northern Iowa on November 17th when they shot 10-24 (41.7%) from distance.

This potential spark in 3-point shooting bodes well for Arkansas basketball considering Elon’s lack of perimeter defense so far this season. They rank 281st in 3-pointers allowed per game at 8.3, as well as 353rd in 3P% defensively, allowing teams to shoot 39.9% from behind the arc. Perhaps Elon’s biggest weakness as a team is defending without fouling. They rank 347th in fouls per game and 357th in free throw attempts allowed per game.

Arkansas vs Elon: What to Watch For

Given the poor perimeter defense statistics for both teams, this game may be won or lost from behind the 3-point line and free throw line. Whoever wins these specific battles has a great chance at coming away with the win. Despite combining for only 12 total minutes, KK Robinson and Jaxson Robinson combined to score 12 points on 4-7 (57.1%) 3-point shooting against Hofstra.

It will be interesting to watch any changes to the rotation and distribution of minutes after what can only be described as an unacceptable loss in Arkansas’s last outing. Musselman was not pleased with the overall effort from the guys who did take the court Saturday, saying after the game: “In the seven years I’ve been coaching, that’s the most disappointing from a competitive nature that I’ve ever coached a team. In seven years in college. Even last year’s two losses, both of those games, I’m disappointed in how we’ve played in a lot of different facets.”

ESPN’s Basketball Power Index predicts the Hogs to have a 95% chance at winning this non-conference game on their home court, and we tend to agree. Musselman will make tweaks to the guard rotation that allow our hot shooters to take advantage of a poor Elon defense, as well as light a fire under his team after the “most disappointing from a competitive nature” game that he’s ever coached. Hogs like Chris Lykes and Au’Diese Toney will make a living at the free-throw line, ultimately sealing the win for the Razorbacks in their final tuneup before conference play.