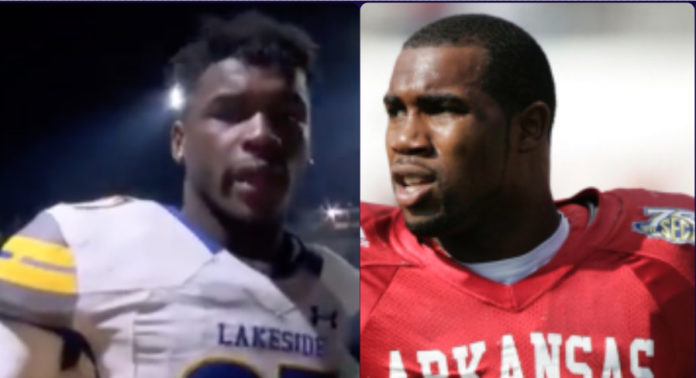 Certain football positions have always been associated with certain college programs. For the Penn State Nittany Lions, it’s the linebacker position. For a time in the 1980s, it was the quarterback for the Miami Hurricanes. But for the Arkansas Razorbacks, it’s the running back position with a long line of greats from Clyde Scott to Darren McFadden to Alex Collins. In a few years, Razorback commit Braylen Russell could join that list.

The Hot Springs Lakeside sophomore running back has gotten off to a historically great start that puts him among some of the best big backs to ever play high school football in Arkansas. As a threat in both the run and the passing game, the 16-year-old, 6’1″ 225 pound bruiser rushed for 823 yards and 12 touchdowns this season. Russell also hauled in 24 receptions for 382 yards and three touchdowns through the air as the type of player who can wreak havoc on opposing defenses from anywhere on the field.

The below videos show he’s practically a man among boys already as a mere sophomore:

The closest comps for Russell lie in the storied past of Arkansas high school running backs. Specifically, the all-timers who combined size and strength like Darren McFadden, Cedric Cobbs, De’Arrius Howard and Jerry Eckwood. Each of those running backs had success playing for the Razorbacks and played at least a season in the NFL.

Let’s start with the most recent of the four, a guy by the name of Darren McFadden. The two-time Heisman Trophy runner-up had a combination of power and speed that scouts absolutely love. McFadden would either simply outrun opposing defenders or, should they be in his way, he would just run them over.

His rushing statistics as a high school sophomore at Oak Grove (now Maumelle) compare strongly with Russell’s. During his sophomore season, McFadden rushed for 859 yards and 13 touchdowns. While the then 185-pound McFadden wasn’t quite as powerful as Russell at the same age, he had excellent speed and would almost never be tackled by the initial defender. In high school, McFadden would display his versatility in every game. In some ways, he evoked the incredibly athletic Basil Shabazz out of Pine Bluff (more here on why Shabazz didn’t become a Razorback).

However, McFadden’s running style when rushing the football subjected him to plenty of hard hits. The shelf life of a running back is not extremely long, so the rushing style has plenty of say on how long the career will be. That was seen in the number of injuries that would afflict McFadden in the pros. When he was in high school and his first few years of college, he reminded me a lot of Eric Dickerson. McFadden was one of those rare players that could line up at almost any skill position and excel.

See him in high school here:

Cobbs starred at J.A. Fair in Little Rock in the late 1990s, and he could make opposing defenders look silly when they were attempting to bring him down. During his high school career, Cobbs was closer to Russell at 6’0” and 217 pounds. As a sophomore, he rushed for 865 yards and 10 touchdowns with a speed that kept making defenders look silly over and over again. As a senior, Cobbs led Fair to an undefeated state championship season, going 14-0 in 1998 and earned Parade All-American honors.

Cobbs’ running style is what stands out to most fans. He had no issue with lowering his shoulders and making opposing defenders pay for attempting to bring him down. One tackler would usually not be enough to bring down the Little Rock native. However, due to his aggressive running style, injuries started to accumulate when he was at the University of Arkansas. Injuries to his back and shoulder later hurt his career at Arkansas, but that does not take anything away from his accomplishments at the high school ranks.

In 2015, he claimed he was being treated for chronic traumatic encephalopathy (CTE), which has been tied to repeated brain trauma and is associated with memory loss, depression and progressive dementia.

For a while, De’Arrius Howard suited up beside Cobbs in the Razorback backfield. The West Memphis High products was another big back who could overpower opposing defensive linemen. At 6’0” and 220-pounds, Howard was a powerhouse with impressive speed, an absolute beast throughout his high school career and his stats as a sophomore are reflective of that fact. Howard rushed for 1,108 yards and eight touchdowns as a sophomore, which is one reason why Tom Lemming ranked Howard as the No. 19 player in the country according to ESPN (ahead of Marlin Jackson, Michael Clayton and Larry Fitzgerald).

Naturally, a lot of big-time programs wanted him. Amazingly, he wasn’t sure where he would end up until the last moment, according to an interview with the Athlete’s Nexus.

“I reached in there and pulled out the hat. That’s how I made my decision. I was a seventeen-year-old kid. Not only was I trying to make good grades and play well, I had schools calling me. I had reporters calling. I didn’t want to let anyone down. I had people trying to persuade me to go one school versus another. It got to the point I was fed up with the entire process.”

Russell will have a tough time breaking some of De’Arrius Howard’s records. Howard rushed for 6,066 yards with an eye-popping 8.6 yards per carry throughout the course of his career according to barclayalmanac.com. Howard tacked on 67 touchdowns throughout the course of his high school career and had no trouble finishing his runs off and running over opposing defenders.

Arkansas Sports Hall of Fame member Jerry Eckwood certainly fit the description of a power running back. At 6’0” and 198-pounds, Eckwood had a bruising running style in the 1970s. The Brinkley running back lifted weights on a regular basis, and he made sure he was ready to deliver punishment when a player attempted to tackle him. During his high school career, Eckwood rushed for 5,215 yards and 67 touchdowns. Eckwood had tremendous speed and could hit a second gear and be gone, leaving opposing defenders wondering where he went and how he got there so fast.

Eckwood took his talents to Fayetteville and eventually the NFL for Tampa Bay. Unfortunately, his hard-charging style cost him as well. Eckwood suffered knee injuries in college and several concussions throughout the course of his career. Later, Eckwood suffered CTE and would be pictured in a New York Times article on the issue. Still, in terms of accomplishments, Eckwood still set a standard among legendary high school football players in the state of Arkansas.

Other Arkansas Running Back Greats

Arkansas football historian Leland Barclay was kind enough to throw me a few other names to consider. Peyton Hillis was a power back that could rip right through tackles and make good defensive players look bad. Barclay said of the Conway Wampus Cat: “in terms of power Hillis is the best I have ever seen.” Hillis was extremely productive his sophomore season in high school rushing for 964 yards and nine touchdowns.

Back to Braylen Russell

Turning our attention to the present day, Hot Springs Lakeside’s Braylen Russell has the potential to be one of the best running backs to come out of Arkansas high school football in quite some time. Russell has a mix of power and speed that reminds me of Darren McFadden.

However, Russell looks to finish runs out in a similar fashion to De’Arrius Howard. Russell has patience and does a great job of allowing the rushing lanes to develop. He, at times, runs out of the Wildcat formation, so fans and scouts both are going to compare him to McFadden. Playing in a more pass-heavy era than his predecessors, Russell is also an impressive wide receiver and has another two years of high school football play to continue to build a reputation and resume.

No matter what happens the rest of the way, the fact Russell compares favorably to a few of the greatest big backs to ever play Arkansas football is in and of itself a big accomplishment. Razorback fans can’t wait to see what’s in store for the rest of his journey.

And for a list of the best Arkansas running backs to come from the high school ranks, regardless of body shape or size, make sure to check out this feature: