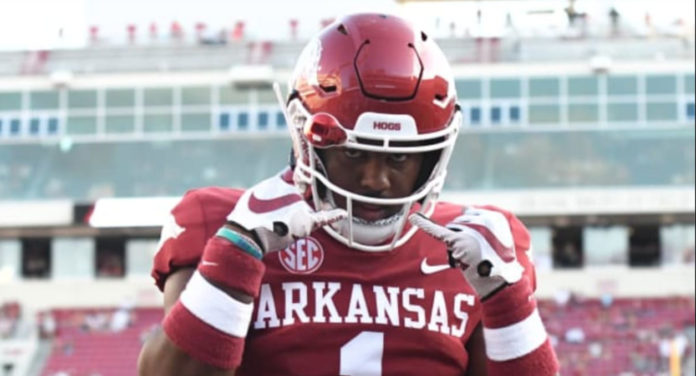 Sam Pittman and Arkansas football recently received an early Christmas present when redshirt sophomore safety Jalen Catalon announced he is returning for the 2022 season. “My family always told me, follow your heart and just enjoy the journey,” the 20-year-old said via Twitter. “And that journey will continue here.”

Catalon’s announcement comes just a week after star wide receiver Treylon Burks announced his plans to sit out of the upcoming Outback Bowl, forgo his senior season and prepare to enter the 2022 NFL Draft. But the expected departure of the great Treylon Burks from the Arkansas offense is now, in a way, offset by the unexpected return of Jalen Catalon to the defense.

Getting an All-SEC talent like Catalon to return for another year is huge for a program that was expected to lose a lot of key playmakers this offseason, particularly on defense.

His return also creates a ripple effect for the Arkansas football team heading into 2022. We break some of those down below.

Jalen Catalon: Razorback Run it Back in 2022

Catalon has been one of the best safeties in all of college football when he’s been on the field. In 17 career games at Arkansas, he has recorded 151 tackles, nine pass break-ups and five interceptions.

During the 2020 season, Catalon earned a top-10 overall grade among Power Five safeties, according to Pro Football Focus. Catalon quickly became a fan favorite last season for his hard-hitting style and elite pass coverage, a combination that hasn’t been seen from an Arkansas safety since Ken Hamlin in the early 2000s.

Catalon faced big expectations in 2021, receiving preseason All-SEC first team honors, as well as getting named one of five captains for the season.

But injuries hampered Catalon’s projected sensational season. He broke his hand a few games in, but played through that in the Ole Miss game about halfway through the season. After that, he had season-ending shoulder surgery. In all, Catalon compiled 46 tackles and two interceptions in 2021.

His absence was notably missed in the Auburn, Mississippi State and Alabama games late in the season, where quarterbacks Bo Nix, Will Rogers and Heisman-winner Bryce Young were able to take advantage of the less-experienced backup Myles Slusher. Had Catalon been healthy for those games, he probably would have caused those quarterbacks to second-guess some of their passes while limiting them to fewer chunk passing plays.

Even though he missed most of the 2021 season, he was still regarded as one of the best safeties in this year’s NFL Draft. In fact, Pro Football Network Draft Analyst Tony Pauline thought Catalon was a lock to enter the draft in late November.

“All signs point to him entering the draft and, in the end, being on the top safeties in the 2022 NFL Draft,” said Pauline.

Catalon returning is a big win for Arkansas’ defense coming into the 2022 season.

The Hogs are losing a pair of super senior linebackers in Hayden Henry and Burlsworth Trophy winner Grant Morgan, who combined for 191 tackles (17.5 tackles for loss), 3.5 sacks and 1 interception in the 2021 season.

They will also be losing a pair of senior defensive ends in Tre Williams and Markell Utsey, who were both key in the Arkansas pass rush this season.

Due to the NCAA COVID-19 stipulation that allows players who played through the 2020 season an extra year of eligibility, linebacker Bumper Pool, defensive lineman John Ridgeway, safety Joe Foucha and cornerback Montaric ‘Buster’ Brown can all come back.

However, Ridgeway is projected to be a fourth round pick in the 2022 NFL Draft and has already accepted an invite to the Reese’s Senior Bowl in Mobile, Ala.

The draft stock of Bumper Pool and Montaric Brown is much cloudier than Ridgeway, but they are moving up on some boards after having great individual seasons.

Pool is tied for No. 10 in the nation in tackles this season (120) and Brown is coming off the best season of his career tied for No. 2 in the nation with five interceptions. Brown also earned Coaches first team All-SEC honors for his performance this season. He’s the first Arkansas cornerback since Ahmad ‘Batman’ Carroll in 2003 to earn first-team recognition from SEC coaches.

Joe Foucha is the most likely of the four to come back, however his decision is still yet to be made.

“It’s a thought that came across my mind. I’m not sure yet,” said Foucha before the Missouri game this season. “I’m just waiting on the end of the season to make the best decision for me. That’s all it is.”

Losing Brown to the draft would be a big blow to a defense that still had its struggles at times this season, but Catalon’s return softens the impact that Brown leaving for the NFL would have.

Coming back provides Catalon an opportunity to take over Grant Morgan’s role as the leader of that defensive unit.

His decision to return may also help sway Pool, Brown and Foucha to come back to improve their draft stock while helping younger players who will be relied on much more.

Regardless if it sways others or not, it’s a great sign to have a talent of Catalon’s level come back for another season.

However, it is going to take much more than just Catalon.

There are still going to be huge question marks along the defensive line and at linebacker. Sure, it helps to have the leadership of an experienced safety like Catalon, but he’d have to get close to 30 stops a game to single-handedly replace the production of Morgan, Henry, Williams, Utsey and Ridgeway.

He’s going to need some help in the form of Pool, Brown and Foucha coming back, replacements stepping up their production, or both.

Another thing to consider is that Catalon is coming off of a pretty serious shoulder surgery and recovering from a broken hand.

Catalon played through minor injuries in the 2020 season, but was only able to play half of this season before shutting it down for shoulder surgery. While it’s no fault of his own, it’s not a given he’ll make it through a difficult and grueling 12-game season.

Even if he’s able to stay healthy, the schedule is brutal. On top of the traditional SEC West gauntlet, Arkansas’ non-conference schedule has few, if any, cupcakes.

You start the season with Cincinnati who is fresh off of a playoff appearance, at BYU that is fresh off of a top 15 final ranking, a solid Liberty team led by Hugh Freeze and you’re welcoming back Bobby Petrino with Missouri State.

Replacing playmakers at other positions combined with Catalon’s durability combined with another tough schedule means there is not a lot of room for mistakes if you hope to replicate the success of this season, next year. If everything goes well, 6-6 may be the best case scenario with the schedule Arkansas has in 2022.

However, if anyone can get their team to overachieve, it’s Sam Pittman and his coaching staff.

Speaking of Sam Pittman’s coaching staff, the Catalon decision to return may have hinted towards more good news for Arkansas football. After a wild coaching carousel that saw so many big time jobs come open, a big question was if Arkansas was going to be affected.

So far, there’s been no indication that Pittman will need to replace any of his staff for next season.

“I think we’re in great shape,” Pittman said while talking to the media earlier this week. “I have no indication whatsoever that we might lose anyone on our staff.”

How does Catalon and his decision factor into this?

A player getting a lot of positive NFL Draft feedback probably isn’t going to come back to school if there’s uncertainty regarding his coaches. It’s hard to imagine that Catalon didn’t have an in-depth conversation with Odom and Pittman to reassure any concerns of Odom leaving.

It’s unlikely that Catalon would have made this decision without some assurances.

That would be another huge win for Arkansas football’s chances in 2022. Odom’s defenses have had their struggles at times, but for the most part he’s been phenomenal.

Catalon coming back probably means that Odom is expected to return as well, and that is more important to the defensive unit than anything next season. Everyone, including me, is extremely excited that Catalon is returning. I was pleasantly surprised, and believe that if Catalon can stay healthy for a full season, he helps the Razorbacks win two more games in 2022 than if he had left.

However, that doesn’t mean everything is going to be sunshine and rainbows for next year. He is only one piece of a large and difficult puzzle for next season.

Improving on or replicating the success Arkansas football had this season is going to be much more challenging in 2022. It’s important to keep expectations realistic when losing so many key players while playing an even tougher schedule.

I look forward to watching Catalon put on the cardinal and white again next year, and his presence in practice will help accelerate the development of a young, hungry group of wide receivers like Ketron Jackson and Isaiah Sategna. Catalon, and presumably Odom, returning for the Razorbacks is big to get Arkansas back to a bowl game in 2022. But how many wins over 6 the Hogs can get next season may boil down to who decides to join them for one last ride.