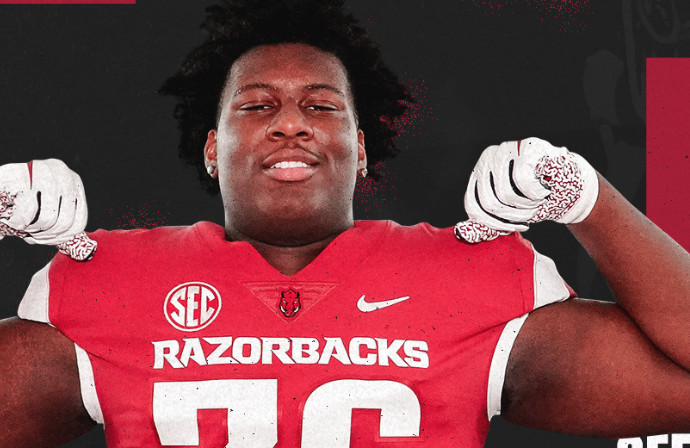 Coming off the Arkansas Razorbacks’ breakthrough 2021 season, fans can’t wait for what the team has in store for Season 3 of the Sam Pittman era. Wednesday’s early signing day did nothing to dint that excitement. The Hogs got signatures from two big-time transfers in Jadon Haselwood, via Oklahoma, and Landon Jackson from SEC West foe LSU.

Haselwood was the top receiver in the 2019 class and appeared in 13 games his freshman year before a torn ACL hampered his sophomore campaign. He led the Sooners in receiving touchdowns (6) and receptions (39) last year while ranking second in yards (399). Jackson, meanwhile, was the 8th-ranked edge rusher in the 2021 class and appeared in five games for LSU, but did not record any statistics. Using his elite 6’7, 240-pound frame, he is expected to make immediate contributions along the defensive line with last year’s grad transfers Markell Utsey, John Ridgeway, and Tre Williams all graduating.

But that’s only the start of the story when it comes to the primetime influx of talent the Razorbacks will receive. The Hogs also made hay on early signing day. If the 2022 recruiting cycle ended today, Arkansas would finish at 19th in the country and 8th in the SEC, which would be the second-highest finish for the Hogs in the two-decades old rankings era. With 22 spots currently filled, Sam Pittman mentioned that the Razorbacks addressed areas of need, but also singled out they still want to focus on defensive line and linebacker.

Below are five players I feel can have a strong impact within the next year or two in continuing the process of competing for SEC championships with the same programs now tracked by NCAAF odds from Fanduel. All rankings are based on the 247sports composite scores.

With the youth Arkansas will have for linebacker depth in 2022, Crook has a strong opportunity to compete for a starting spot or as a key contributor, especially since he will enroll early and participate in spring drills. The former Oklahoma State commit decided to re-open his recruitment after a June visit to Fayetteville and committed to Arkansas a month later. He has been a huge piece in helping Duncanville return to the state championship game this weekend where they will seek revenge on North Shore Galena who defeated them 31-17 in the 2019 title game.

Crook’s talents are widely believed to be greater than his rankings and the Dallas Morning News Top 50 area football recruits for the Class of 2022 agreed, naming him the top-ranked linebacker in the Dallas-area and seventh overall. With Grant Morgan, Hayden Henry, and possibly Bumper Pool all moving on next season, competition at linebacker should be wide open.

Harris has been a college prospect basically since he was ten years old when he tagged along on a recruiting trip to Fayetteville with his older brother. The son of former Razorback defensive lineman, Elliot Harris, E’Marion received his first major offer from Alabama prior to his freshman season and Arkansas followed that three months later. He recently helped Joe T. Robinson win its second state title in three years, clinching his 49th career win as a player in his 58th high school start.

E’Marion Harris owns the size and strength to be a game one starter as a true freshman next September, especially with the departure of left tackle Myron Cunningham, but there have been concerns about his footwork and monitoring his weight. Harris’ imposing size will bring fans back to the days of Denver Kirkland, Sebastian Tretola, and Dan Skipper. So long as Harris comes in next month and takes care of business as an early enrollee, we could see him get action very early in his true freshman season.

When you look at the rankings, Henley’s won’t make your jaw drop nor will offer list. Sometimes, though, looks can be deceiving, and I believe Henley can join the list of productive Razorback linebackers from Northwest Arkansas with the likes of Brooks Ellis, Dre Greenlaw, and most recently Grant Morgan who was awarded the 2021 Burlsworth Trophy.

As a four-year starter at powerhouse Shiloh Christian, Henley eclipsed 561 career tackles and seven interceptions. He already has the frame of a college linebacker while possessing great closing speed and tackling ability. Jermaine Hamilton-Jordan, a 2021 linebacker signee, has already put his name in the transfer portal and it would not be surprising to see one or two more follow him. That would give Henley an even better opportunity at contributing sooner rather than later.

Mbake is one of a handful of incoming pass catchers who could compete for early playing time, but mainly fits the mold as a highly productive player long-term. The Razorbacks were picked as his favorite over SEC foes including home state Georgia, Mississippi State, and Ole Miss (along with multiple offers from plenty other blue blood programs). Coaches and scouts have raved about his capability to win 50/50 balls and his blocking ability which will mesh well with offensive coordinator Kendal Briles’ run-first mentality. The Hogs will have to replace one of the recent greats in Treylon Burks at receiver along with tenured seniors De’Vion Warren and Tyson Morris, so Mbake could push for playing time as a true freshman. Still, expect his biggest contributions to come after after once he polishes his skill set.

Along with MBake, Arkansas boasts a heck of a quartet inking Jadon Haselwood, Clardendon’s Quincy McAdoo, and the blazing fast Isaiah Sategna. There is no question he had the biggest whirlwind of a recruiting process relative to his new teammates. Sategna, who also signed to run track at Arkansas, began attracting attention prior to his junior season due in large part to his speed. Over 30 Division 1 universities offered him a scholarship and he gave his pledge to Texas A&M on March 9th but rescinded it four months later.

After narrowing down his decision to PAC-12 powers USC and Oregon, he went with Oregon for another four-month span before making his final decision on the charmed third try committing to Arkansas and signing his letter of intent on Wednesday. Sategna mentioned in an interview after he committed to the Razorbacks that Arkansas had previously stopped contact, but he reached out to them during the summer and then the talks with Razorback receiver coach Kenny Guiton picked back up.

Sategna proved this year he brings much more to the table beyond his track speed ranking second in the country in receiving yards with 1,908, all the while facing double and triple coverage all season. Briles has caught flack his entire time at Arkansas for the gimmicky plays that do not usually work but that could change with this new weapon. Along with being a deep threat, Sategna offers the added dimension of being able to be useful on jet sweeps and handoffs. It would be tough to imagine him not playing a role of some sort within the next season or two based on what he can do in multiple phases of the game.

The 10 Arkansas natives the Razorbacks inked on Wednesday were the most since Bobby Petrino’s first class in 2008 when they finished 25th in the country and 6th in the SEC. The biggest remaining concern for the class as of now is with safety Myles Rowser, the second-highest ranked in Arkansas’s class and highest defensive player. The suburban Detroit native was once committed to Michigan before decommitting in late April and as of now is still expected to sign his letter of intent by National Signing Day on February 2nd assuming all goes to plan.

If Rowser does stick with his commitment to the Hogs he benefit from two accomplished mentors: Jalen Catalon, one of the best safeties in the country who announced he was returning to school earlier this week, along with Myles Slusher, who stepped up in the absence of Catalon this season.