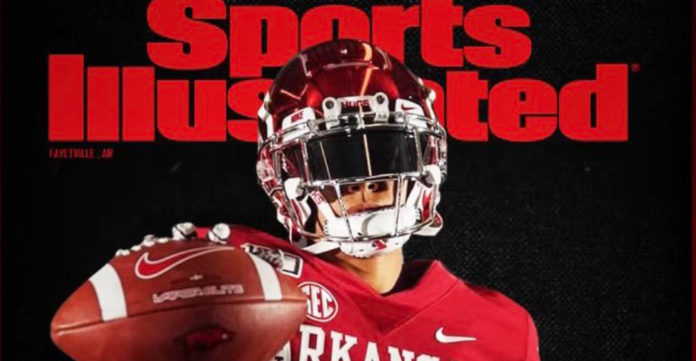 Earlier this week, Florida football coach Dan Mullen got raked over the coals for sounding like he didn’t want to mess with recruiting during the college football season.

Fortunately for Arkansas football fans, there’s never been a question regarding the Razorback staff’s dedication to recruiting. The improvement of recruiting is one reason head coach Sam Pittman skewed young when choosing his new assistant coaches this past offseason.

All that effort is sure paying off now.

Not only are the Razorbacks (No. 19) ranked three spots ahead of Florida in 247Sports’ latest composite rankings for the class of 2022, but on Wednesday night they got a commitment from the state’s No. 1 recruit according to Rivals.

That would be Fayetteville High’s Isaiah Sategna, a standout wide receiver who is now one of eight Top 10 Arkansas football recruits committed to the Hogs.

Arkansas was the first school to offer Sategna, a native of Austin, Texas, in early 2020. But in spring of 2021, Sategna committed to Texas A&M. In July, though, he flipped to Oregon. Given his desire to get away from this area of the country, and how little last season’s Hogs impressed him, it didn’t appear likely he would ever play for the Razorbacks.

Last school year, his Fayetteville High classmates urged him to stay in town and play for the Hogs.

“I was kind of confused. I was like, ‘What’s so good about Arkansas? They went like 3-7 last year. They’re not doing anything,'” he told Oregon football reporter Max Torres in July 2021.

“I feel like the people who live here, their just ties to Arkansas are just really, really strong. And me being from Texas, living there for 15 years, I didn’t really have that connection to Arkansas, so I don’t know — that was the reason I didn’t go to Arkansas.”

Sategna added that a lot of the coaches recruiting him (he has offers from Ole Miss, Baylor, USC, Penn State, LSU and more) “all just assumed I’d go to Arkansas. They’d be like, ‘Is it worth our time recruiting you, or are you just going to go to Arkansas?'”

My, how things change.

For a few weeks there has been talk that Sategna’s commitment to Oregon was wavering and that he would de-commit.

On Tuesday night, those rumors became a lot more legitimate.

Then, on Wednesday night, Sategna confirmed the rumors with this Tweet:

As you can see, he also Tweeted the three 247 recruiting analysts mentioned above. Clearly, they knew what they were talking about.

Within minutes, the Oregon fans showed a shocking amount of understanding. Clearly, when it comes to fans, they don’t make ’em as crazy up in the northwest as they do in the southeast.

You have to love the “Please beat Bama” line thrown in on that last Tweet. If that doesn’t make you root for the Ducks alongside the Hogs, nothing will.

So, why this change in sentiment? We’ll know more when Sategna gives his first interview post commitment, but in the interim here are some likely reasons:

Last fall, Isaiah Sategna spoke highly of his relationship with Justin Stepp, the former Arkansas wide receivers coach. Sategna told HawgBeat’s Nikki Chavanelle that he and Stepp spoke every day. “I really like him. He’s one of my favorite coaches.”

Although Stepp was his main point of contact, he said he also spoke with Kendal Briles and Sam Pittman.

Stepp leaving the Hogs for his home state of South Carolina was at the time a big blow since he had emerged as an ace recruiter. Meanwhile, Oregon’s wide receivers coach Bryan McClendon impressed Sategna.

“I think coach McClendon is the best out of all the receiver coaches that were recruiting me,” Sategna said.

“On my visit, we had a position meeting, and I was super blown away by how he runs practice, the types of drills they do, and just some clips of their practices. My parents and I were blown away.”

In the interview with Torres, he added: “I feel like I’m just raw talent. I haven’t had like a personal trainer before. I’ve been to one football camp and it’s just because football’s always been my second sport. Track has always been my main sport.”

“But now I feel like I’m getting a lot better in football and I feel like I needed to find that receiver coach that I feel who’s the best at teaching, but also cares about his players.”

It’s likely that over the course of the year Sategna has learned that Kenny Guiton, Stepp’s replacement at Arkansas, is that kind of coach as well. In June 2021, just a few weeks before the Oregon commitment, Sategna told Arkansas recruiting reporter Dudley Dawson that “I really like Arkansas, but they are not really recruiting me right now.”

Even if the coaches weren’t recruiting him as much he wanted, it’s hard to believe his classmates slowed down. In fact, this fall he gained a new Fayetteville High teammate in Mani Powell who is also a Razorback commit.

Looking ahead to 2022, the Razorbacks project to have a more playing time available at the wide receiver position than Oregon.

In 2022, the Ducks should return four of their leading six wide receivers in Mycah Pittman, Kris Hutson, Devon Williams and Tony Franklin.

Yes, current freshman Ketron Jackson should assume a larger role. Warren Thompson is a junior, but there’s no guarantee he’ll remain a heavy rotation player next season giving how many balls he has dropped in recent games.

It’s the perfect opportunity for a young go-getter like Isaiah Sategna to step in and shine early on.

Speaking of go-getting, very few do it as well on the high school level as the 5’11 165-pound Sategna. Look at the incredible snag in the middle of an aerial collision he makes here:

The creator of the above video also threw out a comparison between Sategna and former Razorback wide receiver greats that should make any Arkansas football fan salivate:

“I think he’s a hybrid mid of Joe Adams and Greg Childs” the former Hog quarterback told HawgBeat.com. “I think he has the shiftiness of Joe with the lateral quickness, but then I think he has kind of the ball skills and after-the-catch mentality of Greg.”

‘He’s separated himself into that elite category with the skillset that he has,” Casey Dick added. “His route running and his understanding of leverage and then obviously his ball skills, those three things have taken off and greatly increased from him being a sophomore to where he is now.” [Subscribe to HawgBeat.com for more premium content]

Throw in the fact that Arkansas quarterback KJ Jefferson is going to be back as seasoned junior and bonafide preseason All-SEC type talent, and you have the ingredients for an attractive destination.

Make sure to check out this breakdown of Sategna’s game from BoAS contributor Alex Trader:

The Razorbacks Have a Track Capital, Too

When discussing why he chose Oregon, Sategna told SI.com:

“Track was a big part of my decision. They have the best track team in the nation, so I felt like it was the best place for me.”

The Razorbacks have a pretty great track program as well. Historically, the best in the nation, in fact.

It was good enough to attract Sategna’s father, Mario Sategna, who worked as an assistant Razorback track coach from 2018 until spring 2021. Arkansas track head coach Chris Bucknam said of the elder Sategna: “He is one of the best and most versatile technical coaches in the world. His experiences as the head coach of the U.S. National Team at the 2017 World Championships, an assistant coach at the Rio Olympics and a part of Texas’s track & field program for 15 years make him the ideal coach to assist with our program.”

Mario Sategna’s resignation earlier this year seemed like it might hurt the Hogs’ chances given what Isaiah Sategna told Dawson:

Still, Isaiah Sategna would know better than most recruits exactly what he’s stepping into with the Razorback track program given his father’s inside look. Perhaps seeing the excitement behind the Hogs’ great start this season, and seeing the amazing atmosphere at games like the Texas win, has changed his mind about what staying home would look like.

In his interview with Torres, Sategna compared Fayetteville to Eugene, Oregon. Fayetteville is “more like Eugene or like a smaller town, a college town, just like more chill and stuff. And I feel like I wanted to be in a big city again, but I was fine with being in a smaller city because I feel like it’s going to help me be more focused on sports” and study.

Make sure to see the whole interview here:

At 7:20: Compares Eugene to Fayetteville

At 20:35: Talks about living on a golf course and driving his cart around

Sategna adds that his goals for 2021 are to win a state title with Fayetteville High and rack up 1500 receiving yards and 15 touchdowns.

When talking about his mom (who ran track at LSU), sister (who ran track for Texas) and cousin RJ Barrett (a New York Knick), he jokes: “I’d say I got the best genes in Arkansas.”

Learn more about his background here: