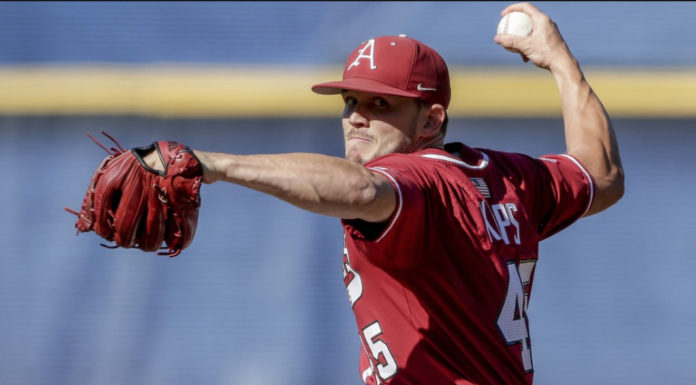 There he goes again!

Kevin Kopps, the most dominant pitcher in Arkansas baseball’s illustrious history, today deservedly won USA Baseball’s Golden Spikes award for 2021. He can add that to his overstuffed trophy case after winning SEC Pitcher of the Year, consensus first team All American, the Dick Howser Trophy and numerous other national and conference awards. A fitting reward for an epic season.

The Golden Spikes is prestigious and considered the baseball equivalent of football’s Heisman Trophy. For those keeping score, Dave Van Horn’s Arkansas baseball program has produced two of the last six Golden Spikes award winners as outfielder Andrew Benintendi won it in 2015.

Several schools have had multiple winners (Florida State leads with four) but the only ones to do it in a similarly tight timeframe was Cal State Fullerton with current NY Yankees 3rd base coach Phil Nevin in 1992 and Mark Kotsay in 1995.

Kevin Kopps beat out the headline-grabbing duo from Vanderbilt because his season was frankly better in every regard (minus the trip to Omaha). Sure, Jack Leiter and Kumar Rocker were drafted higher in 2021 MLB Draft — at No. 2 and No. 10 respectively. And yes, they will command significantly higher signing bonuses, but neither matched what Kopps did on the mound in 2021.

Opposing hitters had a .162 batting average against the right-hander, who set the Arkansas baseball program’s single-season record for ERA during his historic year.

I am sure that, one day, someone will come along and match or surpass what Kopps did this season.

But, man, it will take someone special and it will probably be awhile.  A true unicorn with the ability to throw that often and that effectively, time after time after time against the toughest schedule in the country.

So what does the Golden Spikes award mean for Kevin Kopps in terms of his next chapter with professional baseball?

Kopps was selected in the 3rd round, with the No. 99 pick overall, by the San Diego Padres.

Although he nor the club has announced publicly Kopps has signed, given he has been with Arkansas baseball for six years, odds are he will soon suit up for a minor league affiliate this summer.

Don’t expect him to get the slot value signing bonus for where he was picked. Pennies on the dollar, actually, given he will be older than most if not all of his teammates and he doesn’t really have another option. Yes, Kopps could take the COVID bonus year if he really wanted it, but six years is enough time in college baseball.

The Golden Spikes award doesn’t always equate to a fruitful Major League Baseball career. Most of the winners do end up making it to the big leagues but plenty have flamed out quicker than one would have expected given their college baseball success. 2014 winner AJ Reed of Kentucky had a cup of coffee with the 2017 Houston Astros and is already entirely out of professional baseball and coaching a college summer league team in Terre Haute, Indiana.

The Padres’ minor league system is currently ranked No. 6 by MLB.com. After years of blah, the Padres are now one of the better teams in baseball (currently 3rd in the strong NL West). Their minor league pipeline is filled with numerous prospects destined for MLB as well as they haven’t given away too many prospects chasing blockbuster trades and have drafted well.

There is strong belief in baseball circles, including from Dave Van Horn himself, that Kopps should be dropped right into the fire in AA and see how he does. Many consider AA to be the true testing ground for a jump to the big leagues.

That’s because the AAA level is a mix of has-beens and fledgling prospects that isn’t always where the greatest talent is despite being the next level below MLB. Jumps from AA to the big leagues are more common where the best prospects are all competing against each other head to head.

In my opinion, given Kopps’ age and mature mound presence, he’s already succeeded against the equivalent of Single-A ball by dominating SEC teams. He would give most teams at that level and below all they wanted and more.

If he is able to baffle AA hitters like he did all the high end college hitters he faced in 2021, Kopps will be on the fast track to punch his ticket to join the big league club. He has an outside shot at joining them down the stretch if things go well as specialists are coveted in modern day baseball.

I’m not saying he will be the Padres closer as they chase the National League pennant. The Padres, after all, already have all star Mark Melancon locking up games and a solid lefty setup man in former Ole Miss ace Drew Pomeranz.

If Kevin Kopps’ mix of pitches miss barrels at the AA level, he could be a get-a-key-out-here-and-there kind of guy at the big league level sooner than later.

Where does goes from there? Who knows, but given Kopps’ unique pitches, makeup, maturity and intuitive feel to adjust the action on his pitches hitter to hitter, I like his chances to move up the organization regardless of where they start him, if that is what the Padres want to do.

The Padres have publicly stated they intend to lessen his load in 2021 after his heavy use at Arkansas this past season. San Diego has that luxury; the Hogs did not. Kopps had Tommy John surgery in 2018 and his 89 ⅔ innings in 2021 surpassed his 52 ⅔ innings pitched the previous three seasons combined.

That may slow his ascension depending on opportunity as they protect against over use. But the Padres will soon find out how well Kopps prepares his body to bounce back quickly and they may let loose of the reins a little bit.

The best player and pitcher in college baseball for 2021 will now test his wares against professional hitters. Whether it translates to that level or not…time will tell. Kopps, though successful in previous seasons (ignore the anomaly of 2020), nobody saw this level of success and accolades coming. And I mean nobody.

It’s amazing how quickly he turned the corner. Like the Hogs’ dugout sign says, it was all gas and no brakes.

Who knew tossing a ball with his dog would lead to reverting to his more natural arm slot and finding that magic grip on the most unhittable pitch in college baseball? Regardless of what level he begins his career, expect a quick climb up the ladder as he throws that wiffle ball-like pitch mixed with his change of pace curve and serviceable fastball keeping hitters in knots. Kopps is so unconventional that I would be surprised if he doesn’t have success at the next level and the next level beyond that.

Most of all, for Razorback fans, Kopps is a fantastic ambassador for the Arkansas baseball program, much like former Golden Spikes winner Andrew Benintendi.

If Kopps does rise to the big leagues with Padres, his already amazing story of improvement, perseverance and ultimate domination of college baseball will only get better.

Mariano Rivera has already proved you can be pretty darn good at the major league level with one signature pitch. Everyone, including the Padres, is anxious to see just how Kopps’ version plays in professional baseball.

Given his track record, I wouldn’t bet against him finding his way to The Show.

Kopps is the 18th student-athlete in college baseball history to win the Golden Spikes Award alongside the Dick Howser Trophy, which is considered the Heisman Trophy of college baseball. Benintendi also won both in 2015.

Arkansas is one of five schools, along with Arizona State (3), Cal State Fullerton (3), Florida State (4) and San Diego State (2), to have multiple Golden Spikes Award winners. Arkansas is only one of two schools, along with Florida State (2), to have multiple student-athletes who have won the Dick Howser Trophy and Golden Spikes Award in the same year.

2021 marked just the second year in the history of the Golden Spikes Award that the finalists (Kopps and Vanderbilt’s Kumar Rocker and Jack Leiter) hailed from the same conference.