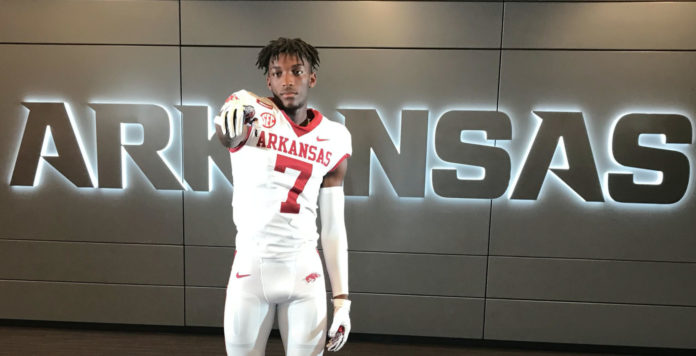 Over the past 12 years, the state of Arkansas has a history of producing tight ends that have excelled in the high school and college ranks. The list of great recent tight ends from this state the list is impressive — Hunter Henry, DJ Williams, CJ O’Grady and Jeremy Sprinkle to name a few.

The class of 2023, though, has the distinction of producing what may be the next member to this group of extremely talented tight ends.

The southwest Arkansas football star is currently rated a 4-star prospect and the top prep player in Arkansas football for the class of 2023 by 247 Sports. Last season, Shamar Easter hauled in 21 receptions for 443 yards and caught eight touchdown passes.

What makes Easter an even bigger commodity is that he is a three-sport athlete that continues to hone his craft. Easter runs track and participates in the hurdles, 200 meters and the 4X4 relay. He also plays football and basketball for the Panthers.

Shamar Easter has all the on-field traits that major college coaches and scouts are looking for in a tight end. He’s already 6-6 and 225-pounds which is larger than Hunter Henry at the same age (6-5 and 220 pounds).

By running 4.62 seconds in the forty-yard dash, Easter is a matchup nightmare for opposing defensive backs and linebackers, as the below clip shows.

No wonder powerhouse programs such as Alabama and Clemson football are taking a long look at him.

So far this summer, Easter has attended camps at Clemson, Alabama and Arkansas. Each school and the coaching staffs at those schools all are extremely different in how they approach the game and what they expect from players. All those schools have a different way of doing things and the camps give prospective players a good introduction of what is expected at each institution.

Let’s look first at Clemson football, a powerhouse program and national contenders year in and year out.

Easter said that university and area “felt like home.” While the Clemson football staff and facilities made it clear that the prospects would be working hard, they still have a lot of fun with a game room, music studio and numerous other activities to keep the players busy in the downtime that they have.

Shamar Easter said he was pleased with his performance at the Clemson Tigers camp. He came away knowing that he can compete at an extremely high level.

Meanwhile, at the University of Alabama camp, Easter quickly saw a difference between Alabama recruiting and Clemson.

When asked about the camp at Alabama, Easter said “everything with the Crimson Tide was straight business.” It should come as no surprise that Nick Saban and the Alabama Crimson Tide are business-like. Nick Saban, who is such good friends with the Hunter Henry’s new coach, Bill Belichick, runs the Alabama football program in a similar fashion to an NFL team.

So portraying a business-like approach to recruits does not come as any surprise. The level of success that Alabama has had makes it difficult to argue with this approach.

The third team camp that Easter was able to attend was the Arkansas Razorbacks’ camp. According to Easter, “Arkansas is a mix of Clemson and Alabama” and “it feels like home and has a business atmosphere to it.”

The Razorbacks have facilities where players can unwind and play basketball or just relax in a recording studio. However, Easter made it clear the Arkansas coaching staff keeps it all business on the field. Easter is going to be a valuable piece for the Arkansas football coaching staff to recruit over the next year or so.

Looking down the road, Easter has a good idea of what position he would like to play at the collegiate level. At 6-6 and 225-pounds, Easter has the size and frame to dominate at either the tight end or wide receiver positions. When I asked which position he would rather play, Easter was quick with the response: “I would rather play tight end at the next level because of the mismatches that I create.”

Easter has the ability to become that Kyle Pitts type of tight end down line, but he know he must improve his level of play to get there.

So he’s working to apply techniques he learned from a Rivals camp earlier this summer. In an interview with Best of Arkansas Sports, Easter explained  “the coaches at the Rivals camps gave me techniques on how to improve and how to apply those to the football season.”

One big area that Easter wanted to improve up this summer was his route running against linebackers and cornerbacks. The Ashdown tight end added that he’s also focusing on his blocking, both in the run and passing game.

In addition to the physical talents, the final trait that made an impression during the interview is just how unselfish a player and recruit that Easter is. Easter was focused on the upcoming 2021 season, and he was determined to reach and exceed the goals the Ashdown Panthers have set for the season.

As Easter said, “I would like to advance further in the playoffs this season. Last season Covid-19 kind of sabotaged our season.”  Ashdown finished the 2020 season with a 7-4 record while battling injuries and Covid-19. Ashdown was able to make the state playoffs but ran into a healthy Ozark team and was defeated 20-7.

The Panthers had players at the quarterback spot and on the defensive side of the ball who returned for the playoff game but were a bit fatigued from battling the illness. Ashdown has a talented team coming back for the 2021 season and that is a realistic goal that Easter has in mind for the Panthers.

The 2023 prep class in Arkansas football may not be as deep in terms of talent as the 2022 class. However, that does not mean the Arkansas Razorbacks can ignore talented players in the state. Easter is the most talented tight end to come out of Arkansas in several years.

Henry, meanwhile, has the edge on being a more physical blocker.

The player comparison at this early stage is the Raiders’ Darren Waller. Easter blocks well but where he sets himself apart is his receiving abilities and route running. Arkansas head coach Sam Pittman and his staff have recruited well up to this point and building momentum this season would not hurt a thing in the recruitment of Easter.

At the end of the day, winning will be a priority for both Arkansas football and Easter. Working together to achieve those wins would only sweeten the deal.

Make sure to watch Shamar Easter’s incredible one-handed catch below: