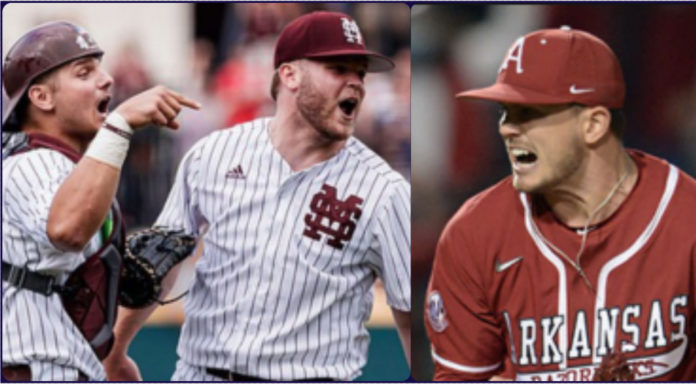 The subjectiveness of All-America teams, especially in college baseball, has always been pretty far reaching.

Annually, we find some “no-doubt-about-it” selections mixed in with a dose of randomness which is expected given the varying media covering the sport. On top of the, the Internet has allowed a good number of fans to convert their passion into an online publication providing unprecedented coverage of the game.

Some are better than others. D1Baseball.com is probably the most notable and those guys do an unbelievable job covering the sport coast to coast. (They are also one of the few national outlets that seems to give Arkansas sports far more love than hate)

Most of the time, the All-America teams selected by the baseball media are on target with the consensus, household name type picks because they put up solid, All-American type numbers along with 42 other guys.

Rarely is anyone kicking and screaming because of an apparent slight.

A great example of this is Patrick Wicklander’s second team All-American selection by the National Collegiate Baseball Writers Association (NCBWA). Without question, Wicklander had an excellent season (7-1 with a 2.09 ERA in 77+ innings) but I don’t believe anyone is crying foul as to why he didn’t end up on any other All-American teams.

Volumes have been written about his UNBELIEVABLE season. I am skeptical college baseball will see anything like that in the near future. That dude put up video game type numbers against the toughest schedule in the country.

Whether DVH called on him for long relief, to traditionally close a game (sometimes more than once on a weekend) or even start the deciding game with a trip to Omaha on the line, Kopps simply delivered.

“Consensus first team All-American” would be an understatement in Kopps’s case. Everyone has agreed …. until this week.

The fellas over at College Baseball Nation, a newish outfit started in 2019, announced their 2021 All American Prospect Teams recently.

Note how they slipped the word “prospect” in there. CBN is clear in the post announcing the teams they selected were based on a player’s long term potential and professional baseball projectability instead of a player’s success in college.

Which means even the player has glaring deficiencies in his game, but a scout still loves his tools, that player can still be a first team All-American at College Baseball Nation.

Case in point is Florida’s Jud Fabian, who was on everyone’s All-American lists coming into the season but ended up with a rather lackluster season.

Fabian put up big power numbers with 20 HRs for the Gators but also struck out a whopping 35% of his at bats, hit an underwhelming .249 for the season with a ho-hum 29 RBIs beyond driving himself in with dingers.

Scouts like his power now but what about when he puts wood in his hands? Fabian’s season somehow landed him on CBN’s All American Prospect first team and Collegiate Baseball’s (a different, long time print publication) All American third team as well.

Third team is even a stretch — but first team? That doesn’t make much sense, prospect or not.

The whole prospect angle is an interesting take by CBN. But I’m not sure calling this an “All-American” team is the correct route. If they labeled it as “College Baseball’s Top Prospects” …ok, I can buy that.

But under the guise of a traditional All American team? I think not — especially when the remarkable Kevin Kopps does not appear on their first team.

Yes, Hog fans, there is an All-American team in 2021 without Kopps on the first team.

This is likely College Baseball Nations’s attempt to be different or stand out in a crowd.

Or, maybe, their selection process was done to incite a riot by passionate Arkansas Razorback fans. These guys are the only college baseball media to relegate Kevin Kopps — perhaps the most dominant relief pitcher ever in college baseball — to something besides the first team.

CBN selected a really, really good relief pitcher for the first team in Landon Sims of the recently crowned national champion Mississippi State Bulldogs. Sims went 5-0 on the year with 12 saves and a salty 1.59 ERA.

And yes, he was great in four College World Series games, pitching 10.0 innings, winning a game, saving two, giving up four hits, one run, one walk and striking out 14 batters.

No pitcher in all of college baseball has numbers like Kopps, which by traditional All-American selection standards puts him in the first team category.

Plus, while Mississippi State deserves much credit for winning it all, it’s no shame for the Bulldogs to realize that they weren’t even the best team in the SEC. That status belongs to Arkansas, which swept the Bulldogs in Starkville.

That’s a valid argument and most, if not, all scouts would agree as Landon Sims possesses a more electric fastball. Sims, a 20-year-old sophomore, is also four years younger.

Those two factors would give him an edge over Kopps from a scouting perspective. I have no doubt scouts will be drooling over Landon Sims in his draft eligible year next season provided he maintains or exceeds his current level.

Given he has another year of college baseball, does he keep his lofty projectability status in pro baseball if hitters figure out his slider or his velocity drops a couple MPHs? Doubtful, because as good as Sims’ makeup on the mound is, pro baseball’s draft in the end is about the tools.

Given Kopps’ age and the near certainty he won’t return to college baseball, he doesn’t have much leverage with MLB organizations. That is, he can’t simply tell teams: “Here is what I will sign for, otherwise I’m going back to Arkansas.”

That will impact where he is selected and ultimately what his signing bonus will be.

Compared to the level of his 2021 performance in college baseball, it will be pennies on the dollar. Unfortunately for a guy like him that put up one of the all-time great seasons by a college pitcher, it will not translate into being taken in the first few rounds and seven-figure signing bonus.

If I was sitting in the war room of an MLB organization on draft day, I would beg my general manager and/or director of player personnel to take Kopps around the 5th-8th round before someone grabs him later in the draft.

Despite the non-traditional stuff (Kopps lacks the 95 MPH fastball and frankly throws a really weird pitch), there are likely a few teams hoping to grab him and see if that gyro-spin pitch will miss barrels in pro ball.

Landon Sims’ 95 MPH fastball/slider combination, meanwhile, is projectible at the next level because nearly every reliever in the MLB has that same stuff.

Bud does Sims’ stuff play at the next level or is he a dime o dozen right-handed power reliever? Time will tell.

Kopps is unique. Kopps is an unknown. That’s mainly because of the uniqueness of the pitch on which he so heavily relies. Often referred to as a cutter, his pitch isn’t what I would call a true cutter like Mariano Riveria’s hall of fame version.

Kopps has more downward breaking action and is a hybrid cutter/slider’ish pitch.

That, coupled with his 90MPH fastball (don’t believe those television or Baum Stadium guns) and a reliable curveball he can spot up in any count, makes him very difficult to hit. His ability to miss barrels with the hybrid is what will get him drafted higher than he probably should be given his lack of leverage.

As long as I’m pretending to be a big league director of player personnel, I would stick Kopps in AA from the jump. An MLB organization knows they are getting a mature and experienced 24-year-old pitcher who won’t have to get used to life on the road or hanging out with grown men on bus trips and hotels.

If his pitch can get AA hitters out, Kopps will likely skip or have a very short stay in AAA on his fast track to the big leagues.

There he can be the specialist so many teams desire with the flexibility to be a situational guy, long or short reliever depending on a team’s needs.

Since Kopps can’t command a high dollar signing bonus, the team drafting him will get beaucoup savings. That makes this experiment extremely low risk.

If it works, some scout will be forever known as the guy that talked his organization into taking Kevin Kopps. If it doesn’t, the organization isn’t out much money and Kopps fades away in the minor leagues, just like most prospects do anyway.

Want more proof of Kopps’ clear-cut superiority at this level?

Consider there are multiple highlight videos of his work in college. Nobody has bothered to make a single reel for Landon Sims as a collegian, though.

This one is a can’t miss: