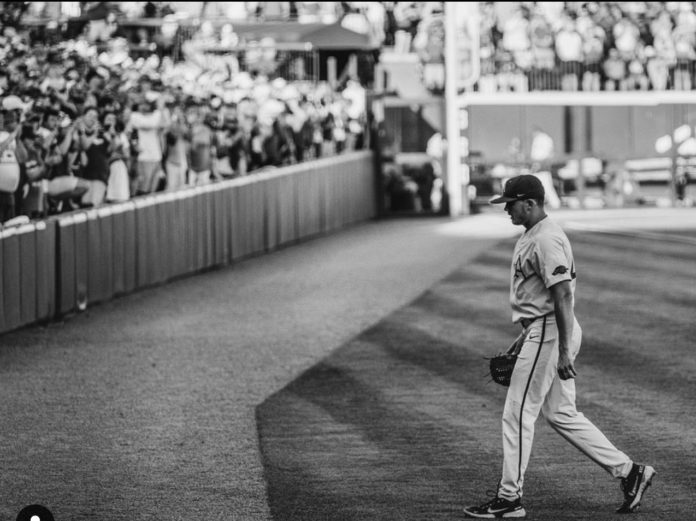 Lawyer-turned-sports-loudmouth Clay Travis hasn’t been especially kind to the Razorbacks over the years.

It’s not that Travis has been overly hospitable to any program, including his native Tennessee Volunteers, but he’s always seemed to reserve a special ire for the Arkansas sports programs and especially the Razorback fans.

“What would happen if every dumb person in the nation’s dumbest Southern state all rooted for the same team?,” Travis wrote a few years back.

“You’d have the Arkansas Razorback fan base.”

“… You’d file Freedom of Information requests for your own coach’s cell phone records and start wearing a hog hat within days. You’re a special kind of dumb, the kind that has never left the state of Arkansas in three hundred years and truly believes that Razorback sports are the greatest in the country.”

Travis, apparently, doesn’t know that more Arkansas fans actually live outside the state than in it, with the DFW metroplex home to more University of Arkansas graduates than any other metro area.

But he’s never been one to worry much about making a preposterous reach here or there.

Case in point: Last fall, he proposed that Auburn, after firing Gus Malzahn, go hire Art Briles as head coach so that Briles could hire his son, Kendal Briles, away from Arkansas.

When breaking down his reasons for despising Arkansas fans, Travis tends to lean on fictional accounts born from his own fevered imagination over, say, actual facts or observations based on reality.

He once, for instance, spent half of an article focusing on Arkansas laying out a fantasy he had about an archetypal Hog fan named “Bobby Ray.”

Uncle Bobby loves guns, see. Lots of them. And he also loves driving his 1978 Ford pick-up with a camo top and the Arkansas Razorback peeing on an LSU logo on the tailgate.

And on and on.

For all his anti-Arkansas vitriol, Travis gave a surprisingly poignant tribute to Arkansas pitcher Kevin Kopps after Kopps’ gut-wrenching last game on Sunday.

Granted, Travis had to check his phone a couple of times to make sure he was saying Kopps’ first name right, but once he got going he was right on track.

Travis began his Outkick the Coverage show by discussing the clip of Kopps signing autographs for fans for an hour after the game, just minutes after the Hogs’ disappointing loss and he had bawled his eyes out in the dugout.

“You want to talk about an incredible testament to Kopps’s character, to probably have the most devastating moment of his college career and maybe his athletic career happen — you give up a home run in the top of the ninth inning, your team loses by one run after you came out of the bullpen to start the entire game.”

Travis continues: “After your team is eliminated as the overall number one seed you go around the entire Razorback Stadium signing for every kid that wants your autograph for over an hour.”

“To be a college kid, be hit in the face with the most devastating outcome that could happen in your athletic career, and then be selfless enough that you are thinking about all the Razorback fan kids that are there in the stadium that you want to help feel a little bit better because they desperately wanted to win too.”

Later, after praising Kopps character some more, Travis brought it home: “I think about it from the perspective of a dad now, I’ve got three boys. I want to see my kids win, I much prefer seeing my kids lose and still maintain their overall ability as humans.”

“Because it’s easy win with grace. It’s incredibly difficult if you are hyper-competitive to lose to get back up off the mat and go again.”

Travis says Kopps’ response sets and example for how all of us should react in the face of great disappointment: “Get yourself back up, dust yourself off and get right back into the fray.”

“I don’t know what Kevin Kopps’s future is going to be, but I would like to buy stock in it right now.”

“Not based on how well he pitched, which was very well in that game, but based on the way that he responded to one of the most difficult losses that you could possibly have.”

Travis is one of the Razorback fans’ most despised talking heads, and yet this may just be the most uplifting and honest things he’s ever done involving the Hogs.

Perhaps his hate of Arkansas only applies to football, or perhaps he simply decided to put aside the theatrics for a minute and speak from the heart.

Whatever the reason — well done, Clay.

And well done, Kevin, for being the kind of true hero we wish so many of our sports stars would become.

For good analysis on Kopps, the state of Arkansas baseball and other big questions in Razorback sports, check out the latest “Ask Mike” show: