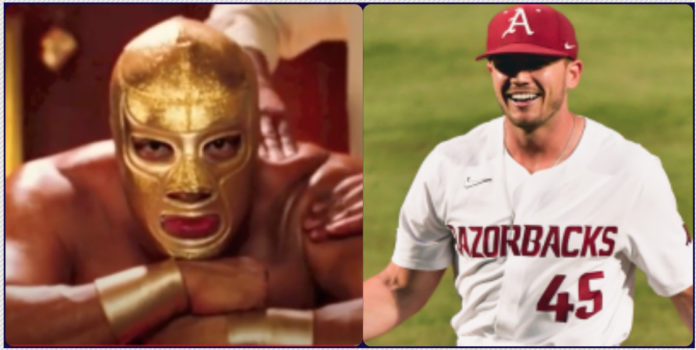 Unlike some other major college pitchers, you won’t catch him on the mound constantly fidgeting and initiating all manner of gesticulations, twerking and pseudo babble.

From the outside, Kevin Kopps mostly appears as steady as they come. A textbook example of the kind of even-keeled nature and self-discipline that can, when it all comes together, produce the greatest season in Arkansas baseball history.

That point was further driven home on Thursday when it was announced that Kopps is one of three finalists for the annual Golden Spikes Award, college baseball’s equivalent to the Heisman Trophy.

As college baseball’s most dominant pitcher, Kopps finished the 2021 campaign with a 12-1 record and 11 saves.

He posted the nation’s lowest ERA (0.90) and WHIP (0.76), striking out 131 in 89 2/3 innings of work. Opposing hitters had a .162 average against the right-hander, who set the Arkansas baseball program’s single-season record for ERA during his historic year.

Still, that doesn’t mean Kopps was immune to the need to hype himself up on the mound in season that has already landed him the prestigious Dick Howser Trophy, the SEC Pitcher of the Year award as well as Collegiate Baseball National Player of the Year.

“I do a little bit of self-talk confidence on the mound,” Kopps said on a recent episode of “The Pitching Ninja.”

Kevin Kopps said that all season long, when he was mentally preparing for one of the 131 strikeouts he ended up throwing, “it’s really just me and [catcher Casey] Opitz and that’s all I hear and see on the field.”

“I don’t really see anything else.”

Kopps would get so locked into a tunnel of intense, athletic focus, that at times he might have gone into something like a trance. No doubt, he was deep in a zone.

To the point where he likened himself to the trainer of the wrestler Ramses, the enemy of the titular hero in Jack Black’s 2006 comedic masterpiece “Nacho Libre.”

“The self-talk almost reminds me of that scene in ‘Nacho Libre’ when the bad guy is getting massaged and the [trainer] is talking them up,” he said. “That’s what I think about on the mound a little bit.”

That scene features the trainer going into a trance-like state, repeatedly saying:

Kopps, who’s now number 1 in the hearts of many Arkansas baseball fans after a Regional performance that spurred talk of a Kevin Kopps statue, also said that he frequently gets mad at himself.

“Almost all the time. Almost too much.”

“One of the things that I’ll do that I try not to do is — usually on the change up — I’ll throw it in the dirt and I usually slam one of my feet on the ground when I’m irritated.”

“I try not to show any emotion, negatively out there, but that’s one of the things I’ll do.”

Kopps also claimed that one of his nickname — besides “Kopps” — was “The Officer.” But Casey Opitz, also interviewed below, laughed and insisted that nobody actually calls him that.

Make sure to the check the entire fun Kevin Kopps/Casey Opitz interview below.

At the end, Kopps shows exactly how he grips and releases the baseball on his famous “gyro” pitch.

And here Kopps explains the way-too-personal tactic that opposing SEC fans would use to try to mess with his head:

Kopps is just the third Razorback to be named a Golden Spikes Award finalist and the first since Andrew Benintendi took home the award in 2015.

2021 marks just the second year in the history of the Golden Spikes Award that not only do all of the finalists hail from the same conference, but also the second time that they have all played in the Southeastern Conference.

All four finalists for the award in 2015 also suited up in the SEC (Andrew Benintendi, Arkansas; Alex Bregman, LSU; Carson Fulmer and Dansby Swanson, Vanderbilt).

This is also just the second time ever that all the finalists for the award have been pitchers.

All three finalists for the 2011 prize also made their mark on the mound, including eventual-winner Trevor Bauer (UCLA), as well as Danny Hultzen (Virginia), and Taylor Jungmann (Texas).

From Thursday, June 24, through Friday, July 2, the voting body will cast their final vote for the Golden Spikes Award winner and fan voting will simultaneously be open on GoldenSpikesAward.com.

Selections made by the voting body will carry a 95 percent weight of each athlete’s total, while fan votes will account for the remaining five percent.

The presentation of the 43rd Golden Spikes Award will be announced at a later time. (via Razorback Communications)

Kevin Kopps in the MLB Draft

In a recent press conference, Dave Van Horn broke down what he thought of Kopps’ prospects for the July 2021 MLB Draft:

I think Kevin would go pretty good in the drafts. First off he deserves it, then the negative part for him is that he’s 24 years old, but I think what we’re getting out of it as that instead of starting a guy in Low-A, they’re going to start even higher, maybe just send him to AA and see if he can get in or not. Then if he can, great.

If I was guessing, I think he might go in before the fifth round. Are they going to pay him what they should? Probably not because of his age.

On whether Kevin Kopps is gone for sure:

Kevin could come back another year if he wanted to. I don’t see that, he’s taken so much schooling.

He’s where he needs to be academically, but the draft is so tricky. They have X amount of money each organization, they always try and save a little here, a little there so they can pay a guy more than their slot.

I’d say because of his age and his maturity, you could send him to a AA clubhouse right out of college. He would be accepted by the players because of who he is and the way he acts and the way he works, they’re going to like him.

I would send him to AA and say ‘Hey, here you go. See what you can do.’

…That might be the way I would handle it. But it depends on personnel and who drafts him, there’s a lot of factors there. It’s easy for me to sit here and say that.

On Kevin Kopps as an example to future Arkansas baseball pitchers

He found himself on the mound. He just got comfortable and he could command the baseball like no other pitcher I’ve really ever had with just by working at it and repeating everything, his delivery.

It was amazing. We’ll be able to talk about Kevin many years down the road and how he got in shape. He changed his body and got his mind right, the way he ate, nutrition.

I think it’s going to help a player or two in the future here. Just if they’ll listen and look at the success he had.

I think maybe not to the extreme that Kevin, the success that he had, but it’s going to help make some of these players down the road better.

Part of Kopps’ diet was a regular intake of beet juice.

He talks more about that here: