Search
Home Arkansas Baseball Around the SEC Mike Irwin: How Vanderbilt Baseball Keeps Legally “Cheating” Its Way to the... 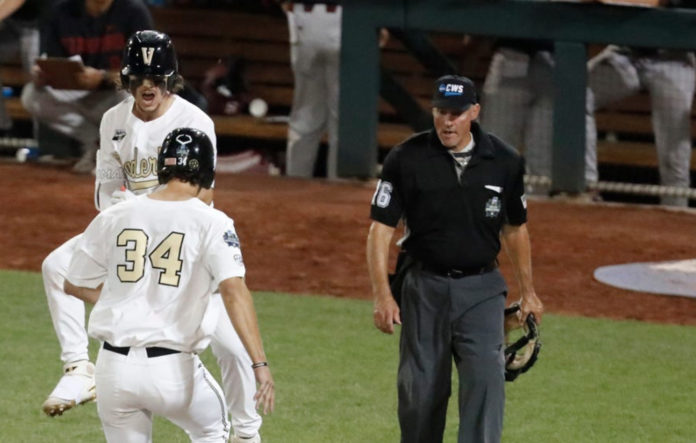 Much to the chagrin of most Razorback fans, the Vanderbilt baseball program just keeps chugging along.

Even after a relatively off regular season, it’s been gifted a nearly free to the College World Series finals to face Mississippi State after its semifinal opponent — NC State — had its roster gutted by COVID-19 health and safety protocols.

The Wolfpack had overtaken Arkansas as the hottest program in the nation after becoming the only team to take a series from the Hogs in Fayetteville this season and then winning their first two College World Series games.

But after beating Vanderbilt on Monday, NC State lost about half of its roster before Friday’s Vanderbilt vs NC State game due to issues relating to COVID-19.

That created an obvious talent advantage for Vanderbilt — one that the Commodores gladly took advantage of.

Then, less than 12 hours after Vandy’s 3-1 win, the NCAA declared the rubber match between Vanderbilt and NC State a no-contest because of the COVID-19 protocols, giving Vanderbilt a free pass to the finals that start on Monday.

Typically, though, Vanderbilt baseball teams advance deep in the College World Series by having more talent than almost every team they face, especially when it comes to future first-round picks.

In fact, the two Commodores who are battling with Arkansas’ Kevin Kopps for the Golden Spikes award — pitchers Kumar Rocker and Jack Leiter — are both expected to go in the Top 10 of the 2021 MLB Draft.

The Vanderbilt baseball program has produced 10 Top 10 MLB draft picks since 2003, which is more than every over SEC East team combined. That’s also eight more than Arkansas, which has two Top 10 picks in the same span in Andrew Benintendi and Heston Kjerstad.

For Mike Irwin, the longtime Razorback analyst, the answer is easy.

There are a few things the famously cranky Irwin doesn’t like about Vandy.

Near the top is the way they have gotten around the NCAA limit on the number of scholarships each NCAA Division I team can award to its players.

Under NCAA rules, a Division 1 baseball team’s 11.7 scholarships can be divided between a maximum of 27 players on a 35-player roster, with all players on athletic scholarship having to receive a minimum of a 25 percent scholarship.

That leaves room for eight walk-ons.

But Vanderbilt, a private schools, gets around this through Opportunity Vanderbilt, which promised that any student who was admitted to the school would not be prevented from attending due to cost of tuition.

“The school looked at each student’s family income, how much it could reasonably provide for their child to attend Vanderbilt, and subtracted that from the regular cost (Vanderbilt’s tuition for the 2018-19 school year was over $70,000),” according to The Post and Courier.

“Every year there are a lot of kids that come from low-income families, and there’s no way they can afford to go play college baseball, because they’re not even getting the full scholarship,” Irwin points out.

“Their parents would have to kick in, and they can’t afford to.”

“So what do these kids do? They go straight to minor league baseball, and take their bonus money and go on.”

“Well, Vanderbilt gets around this by saying, ‘Hey. Hang on. We’ll bring you in here. What’s your family income?'”

“And then they determine, ‘Okay, you only have to pay this. Because that’s not going as a part of the [athletic] scholarship money that person would have, they can apply more of it to their room and board.”

Not only that, but they would also have enough left-over funds for hiring a paper writer at WritingAPaper, because of its price rates. The service can help with writing academic papers of any complexity, so students have more free time to spend on baseball.

The end result of Opportunity Vanderbilt, which is based on similar programs at other private colleges like the Ivy League schools and Rice, is Vanderbilt gets more players and better players than most other SEC schools.

“We have more of an inroad to a kid that is (in a) lower economic (situation) who wants to be here, can be here because of his economic situation,” Corbin said.

“Does it hurt us? Yeah, because we don’t get every kid we want.”

“But you also understand, it is an advantage for us, there is no doubt.”

Irwin doesn’t see why the SEC allows this workaround.

“I’ve never understood why the conference puts up with this, but they do. They’ve done some things… to help some of the other schools, but it’s still not really equal.”

“The only way I can figure it out is they think, ‘Well, we got to have this private school in the SEC because it’s got great academic reputation, and they don’t win in anything, so we’ll let them win in baseball.'”

“That’s the only thing I can figure out.”

The resilient NC State baseball squad was the favorite among many Hog fans because:

b) No real Razorback fan wants to see Texas win it all, and seeing SEC rivals in Mississippi State or Vanderbilt take it wouldn’t be much better

Unfortunately, the Wolfpack fell just short to No. 4 seed Vanderbilt on Friday afternoon as the Commodores took the game by a 3-1 score.

Fielding a depleted roster against the defending national champion, NC State (37-19) out-hit Vanderbilt (48-16), 8-6, but was only able to plate one run that came in the bottom of the fifth inning.

The true freshman allowed just two hits, one earned run and three walks after facing 23 batters in his day of work. Payne showed tremendous poise in his College World Series debut and did not surrender a hit until the fourth batter of the third inning.

Coming into the outing, the bottom of NC State’s lineup (Falsken, Highfill, Eddie Eisert, DeAngelo Giles) had combined for zero RBIs, three hits and 27 at bats this season leading up to Friday. In the game, those four players accounted for half of the Pack’s hits and the lone RBI.

Highfill notched the first hit of the outing, a leadoff single down the right field line, in his first at bat of the 2021 season, but Vanderbilt got on the board first in the top of the fourth inning. Dominic Keegan plated an unearned run after reaching base on an error and coming around to score on a two-out single, and CJ Rodriguez tacked on another run on a wild pitch with the bases loaded.

The Pack put the pressure on in the bottom of the fifth with three hits and a run coming from the bottom of the order. Giles put the Pack in the scoring column with a sac fly to left field, bringing home Falsken who reached third with a bunt, another Highfill single and a ground out to first.

In the sixth, the Commodores extended their lead to 3-1 with an RBI single by Javier Vaz, but NC State managed to work its way out of the inning despite the bases being loaded for Vandy.

NC State pitcher Dalton Feeney forced Vandy into three scoreless innings in a row in the seventh, eighth and ninth after entering the game in the sixth.

ESPN will continue its coverage of the College World Series with the tournament finals. ESPN2 will have coverage of the first and third games (Game 3 is if necessary) while ESPN will air the second game.