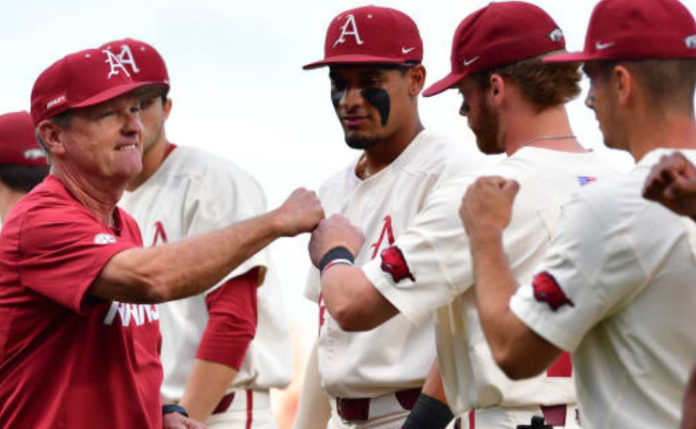 Many in the media joined me in declaring the Fayetteville Regional pairings an egregious mistake by the NCAA Baseball Tournament selection committee.

We all figured a very good team would go home too early. Turns out, Nebraska, the Big Ten champion, nearly pulled the upset on the No. 1 overall seed Arkansas baseball team. The Huskers proved they deserved their own regional and could have been a legit College World Series contender.

The Cornhuskers dominated the Hogs in Game 2 to force a deciding game in the regional Monday night and quickly grabbed a 2-0 lead in that matchup.

If Arkansas baseball didn’t have junior Kevin Kopps, who is turning in one of the greatest pitching performances in college baseball history, the Hogs would probably have needed to clear out their lockers instead of host a Super Regional series with North Carolina State.

“When I saw them pop up, I thought, “Why are they sending the Big Ten champion here?’ It doesn’t make any sense when you look around,” Arkansas baseball coach Dave Van Horn told the media following Arkansas’ 6-2 win on Monday night.

“You see some other regionals where a Power 5 is the No. 1 and they don’t have another Power 5 team in the regional, and they might have been a seven or eight seed, nine — whatever.

“I know it’s a really tough job and I get that, but Nebraska is a really good team. They kind of played a regional format for most of the season. They’ve gone on the road, stayed in hotels, played two games in a day, played two different teams, and I think that they came in here and they were a little comfortable — more comfortable than I wanted them to be.”

“Tonight, I knew it was going to be a dogfight, and it was.”

So, no disrespect to NC State or any other team Arkansas may face if they can get to Omaha, but it looks like the Cornhuskers might have given Arkansas the best fight they will see the rest of the way.

In Game 1 of Arkansas vs NC State, the Hogs crushed the Wolfpack 21-2. Granted, the opponent has a way of bouncing back strong in Game 2 of these series, but that’s a heck of an opening statement nonetheless.

These Arkansas baseball juggernauts had already cruised through the SEC winning all of its series and the SEC Tournament.

But Nebraska kept Arkansas off-balance at the plate and hitters such as Jaxon Hallmark, who has relatives in Bryant, were able to get to the Hogs pitching staff. They couldn’t get to Kopps — no one has — and that is why Arkansas more than ever looks good to win the CWS title.

What the committee did by putting Nebraska in Arkansas’ regional is ensure the Hogs are wide awake for what had seemed like a dangerous NC State team. They were 17-3 on the road this season before Friday’s wipeout and had won the Ruston Regional (Louisiana Tech) as the No. 2 seed. They upended SEC member Alabama along the way.

If Arkansas had bat flipped its way through a field full of pastries there is a chance they could be overconfident against the Wolf Pack.

That shouldn’t be the case, although human nature is to let down a slight bit in Game 2 as the winner after such a detonation. Arkansas will be ready to play. Just as they were ready to play against Nebraska. You could see that by the stellar, heads-up defensive plays the Cornhuskers made in their Game 2 win last weekend.

Arkansas didn’t take the Huskers lightly. They just came to Fayetteville determined to not go quietly.

These last few days, Arkansas baseball hitters worked on being more patient at the plate and not swinging at bad pitches. There was refocusing at Baum-Walker Stadium that may not have happened if Arkansas hadn’t been challenged by Nebraska.

I know it caused some anxious moments for fans (Some of you need to relax a little bit and have more faith), but in the end this will be a good thing for a title run.

When NC State got up by a one run on Arkansas early in Friday’s game, it wasn’t a shock. Knocking off a team such as Nebraska early proved the Hogs are the clear-cut favorite.

“I think they have a great shot [at winning the College World Series],” said Nebraska coach Will Bolt, who was known as “Dave Van Horn Jr.” back in the day. “They haven’t lost a series all year.”

“They’ve got a lot of talent, a great coaching staff. They’ve got everything you need. They play great defense. They’re athletic and they obviously can beat you in a bunch of different ways.

Arkansas vs NC State: How to Watch

Below is an excerpt of an Arkansas vs NC State preview from the analysts at D1Baseball.com:

“NC State has a clear advantage in starting pitching. I think they’re very close to actually offensively and defensively.

“I mean, it’s only one way to measure a team’s defense, but NC State’s third in the country in fielding. Arkansas I think is 16th.”

“So both these teams defend at an extremely high level. Arkansas has Kevin Kopps. [NC State pitcher] Evan Justice is really good. He’s not Kevin Kopps, but that’s just such a difference maker.”

“But the one thing that Arkansas doesn’t have is guys that can consistently get into the fifth or sixth inning, except for [Patrick] Wicklander.

NC State doesn’t have a deep staff. It’s five guys that they use, that’s it. But Johnston, Highfill and Wilson can get you to the fifth, sixth, seventh, eighth inning.”

“And then you’ve got Justice back there and you’ve got Villaman. And that’s all they need in a short series. So the key will be can they handle that atmosphere and can they find a way to get to Kevin Kopps assuming his arm is still attached to his torso.”