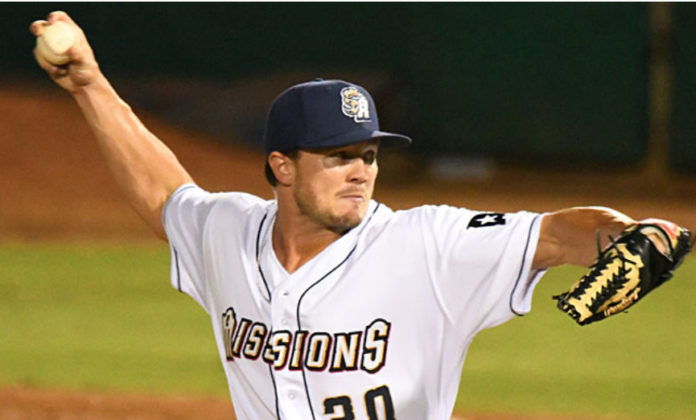 As a pitcher, Arkansas baseball legend Kevin Kopps is as precise as they come. For the Razorbacks, he threw for a program-record ERA of .90 in 2021 and struck out 131 batters, the third-most in Hogs history.

Kopps built toward that amazing season with a workout routine and structure that went beyond the scope of what most college athletes are willing to do. Regularity and routine, however, have been far from the norm in this next stage of Kopps’ life.

In a recent exclusive interview, Kevin Kopps told me about his embrace of chaos in his new life, as well as a host of other topics including his thoughts on whether a statue should be built to him in Fayetteville. We also discussed the reliever’s time in the minors and what he must do to reach the majors as well as discussing what he misses about playing for the Hogs.

“I’ve been doing well,” Kevin Kopps said. “It was an easy adjustment, in my opinion. Arkansas was run similar to the Padres. So, it wasn’t too bad.”

Kopps is working his way up the ladder in the San Diego Padres system. However, It is a familiar situation for him.

Kopps is coming off of one of the most historic seasons in collegiate baseball. He boasted a 12-1 record with 11 saves. Kopps had that record-shattering 0.90 ERA and 0.76 WHIP with 131 strikeouts in 89.2 innings.

That amazing season earned Kopps a spot in the third round of the 2021 MLB draft, 99th overall.

Moving from collegiate baseball to the professional ranks has not slowed him down.

Kevin Kopps in the Padres Organization

“Even knowing that it’s going to be good and knowing that God has a plan for me and trusting in that and still having the year I did, (the Draft is) still really stressful for some reason,” Kopps said. “And I wasn’t even doing anything. My agents were taking care of all of it. But it is still stressful. But once we got that call, we just celebrated. My family and I. My parents teared up and it was a good day after that.”

Kopps started out in the Rookie League, allowing one run in 4.2 innings and striking out 10 batters. He moved up to High A in Fort Wayne. He pitched eight shutout innings over eight appearances and struck out another 10 hitters. He pitched two innings in Double A San Antonio before the season ended, not allowing a hit.

Overall, Kopps has pitched 14.2 innings in professional baseball, striking out 22 opponents and allowing one run on five hits and six walks. He has a 0.61 ERA and 0.75 WHIP as a professional pitcher. Kopps was one of only two of the Padres’ draft picks to make at High Single-A this season.

Combined with what he did with the Razorbacks, Kopps has put some video game numbers:

Kopps managed the transition from SEC baseball to minor league baseball well. He already had an idea about how hard the minor leagues would be.

“It was kind of similar to what I was expecting,” Kopps said. “I had heard that SEC baseball falls somewhere in between High A and AA and that’s what I got.”

Kopps is still dominating on the mound, despite different circumstances. He does miss some things from his Arkansas baseball days, however.

“I miss how passionate all the fans are,” Kopps said. “I don’t think you really get that back until you start making your way to the big leagues. So I would say that’s probably what I miss most about it.”

Still, Kopps for the most part is enjoying the new scenery as he gets to live in different parts of the nation.

“I think what I’ve enjoyed the most is just learning more about the game,” Kopps said. “I think every level I get to, I feel like I’ve learned pretty much everything I can learn about the game.”

“But there’s always new things. And it always blows my mind that there’s more to learn. Because just being in the game for 20 years, you think you know… Like I was just saying, you think you know everything and then there’s a bunch of different aspects that are brought in and going to those levels taught me different things.”

Changing cities does not seem to phase Kopps. He’s had fun and dominated in every city he’s played for.

“I think it’s fun. I think that’s why I like the league,” Kopps said. “The unknown or maybe the chaos or the lack of structure. I just like it. I don’t know why. I’ve always liked to live like that. And I think it helps. Coming out of the bullpen and in the profession I’m in.”

Kopps says he likes to live in such a lack of structure and it’s why he likes coming out of the bullpen. The chaos started the day he was drafted.

Although many things have changed for Kevin Kopps, his mindset has stayed the same.

“I didn’t really change (my mentality) at all,” said the 24-year-old Kopps. “I have to focus just on winning the game and just what I need do need to do to win. That’s what I stuck to this year and it’s worked for me. If I start focusing on other things like, before I go out focusing on hitting, I don’t know, I want to go three up three down, then I start to actually lose my focus thinking about that. So I just focus on winning.”

Razorbacks as a Launching Pad for the Pros

Arkansas is a top program, so naturally the system is run similarly to pro farm system. So is the coaching.

“It’s really not super different,” Kopps said. “Just at Arkansas, I really only hung out with the pitching coaches and stuff like that. We were more separated and that’s how it’s here. And the coaching style… Coach [Matt] Hobbs’ coaching style is, I would say very similar.”

“He wants you to learn yourself and ask him questions rather than him always going up to you. And that’s what they do with pro ball. They’ll give you help and feedback, but I think they want you to be more interested in yourself, learn yourself. Because I think that’s how you get to the big leagues, is not needing someone to hold your hand all the time. But they do. It’s more like you go up to them and ask them questions and they’ll help you, correct you.”

“I really think that’s the best way to learn in any situation, is figuring out on your own and just having guidance. Because if someone’s always telling you the answer and you don’t really learn it. You just follow instructions.”

Despite the success, Kopps is still finding ways to improve. He’s been working on his sinker in order to progress towards the major leagues.

“I think I started cutting it a little bit,” Kopps said. “So I’ve been just working on getting on top of it again.”

He is aware of where he needs to improve going forward. That’s part of why he was able to improve so much in his college career.

Where Kevin Kopps Needs to Improve the Most

“I expect that if I don’t get my fastball going it’ll be much harder for me to keep those guys off of it,” Kopps said. “Because as hitters… The difference between college and these guys, is I think college guys try to adjust to the pitcher. Whereas I don’t think the AA hitters do so much adjusting. Because their swings are so good. So, I think it would be hard to just throw a slider all the time. So I think that might be a challenge to learn.”

Kevin Kopps is a prime example of why young athletes should never give up. He was not a highly recruited player coming out of high school and he was not a standout pitcher in college for his first few years. Heading into the 2021 season, he even doubted whether the Arkansas baseball coaches wanted him back at all.

He was a high IQ player who worked hard at his craft and now he’s rapidly approaching the major leagues. He is an example for young players to follow and his message to the younger generation represents that.

“Just that any foundation of everything is built on your relationship with God,” Kopps said. “So that’s the most important and that’s what I focused on a lot this year. And just to remember that baseball’s a wild card sport. And that’s why there’s so many rounds in the draft. And it just takes one good year for someone to figure it out.”

“I think there’s multiple stories about guys that one year just clicks for them. And if you decide to give up one year, the next year could have been your year. And I was almost to that point last year. So, just to keep with it.”

Kopps has earned numerous awards this year and is going to be a major leaguer sooner than later, but he remains as down to earth as ever. He wants everyone to remember him as Kevin the person, not the baseball player.

“I guess I stay humble, because I just feel like Kevin. I’ve never really felt any different with whatever I win,” Kopps said. “And I guess I just want people to like me for being Kevin, not just the Golden Spikes winner. So, I don’t know. I think that’s why I stay humble. It’s really cool to me and it’s fun. But I just like being Kevin.”

Toward the end of last season, the Razorbacks’ publicity team even pushed for a statue of Kopps in front of Baum-Walker Stadium.

“I think it’s fun and good,” Kopps said. “I think there’s a couple other guys that are deserving of a statue if I’m going to get one. But I think it’s fun. I saw that Van Horn got one and he’s well deserving of that. I’m really glad that he got memorialized in that way.”

Kevin Kopps will soon be a Major League Baseball player and may very well have a statue outside of Baum-Walker stadium, but he remains humble and appreciative. His message to Arkansas baseball fans is one of gratitude.

“Just a thank you to all of them for just always being there and always supporting the games. They were fans before I was ‘Kevin Kopps’ this year. Even when I was bad, they were still Kevin Kopps fans. I have a lot of really good memories of people coming up to me before I was who I was.”

“So I just appreciate that.”

Listen to my entire interview with Kevin Kopps here: