Search
Home Arkansas Football Around the SEC How Can Arkansas Blunt Will Rogers and Mississippi State’s Insanely Accurate Attack? 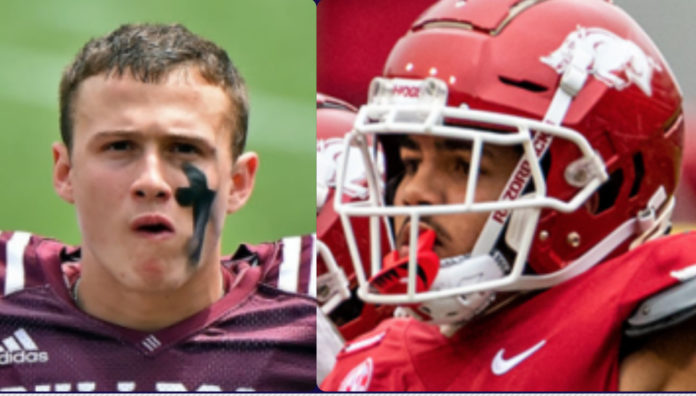 “Great moments are born from great opportunities,” hockey coach Herb Brooks famously told his Team USA players before the Americans rolled out of their locker room and skated to a 4-3 victory over the heavily-favored Soviet Union during the 1980 Olympics.

There isn’t an Arkansas football fan in the world who views the loss of redshirt-sophomore safety and captain Jalen Catalon as a “great” anything—well, at least not publicly—though losing the defense’s heartbeat has certainly proved to be an opportunity … At least for true sophomore Myles Slusher.

Slusher has earned back-to-back starts in Catalon’s absence and even recorded his first career interception in the recent 45-3 drubbing of Arkansas-Pine Bluff. While UAPB comes nowhere near the quality of opponent the Razorbacks will see down the stretch, starting with a red-hot Mississippi State football team this Saturday, the margin of victory was much needed for the team, and even more so for the defense.

It was an especially big performance for the defensive backs, particularly Slusher, who bounced back after a somewhat tough debut against Auburn one week prior. In that Auburn loss, Slusher had the fifth-lowest Pro Football Focus grade (56.2) among defensive starters, according to stats provided by HawgBeat.com.

“You know, talking to Myles last week, he said he was just as nervous, as nervous as he could be against Auburn,” Sam Pittman said following UAPB victory, before going on to praise Slusher and redshirt-sophomore defensive back Malik Chavis, who also grabbed his first career pick in the blowout.

“I think the more playing time [Slusher and Chavis] get, the better they will be,” Pittman continued.

Looking ahead to Mississippi State’s Will Rogers

In the last two games the Razorbacks have played against high-quality SEC quarterbacks, the secondary has been shredded.

Auburn’s Bo Nix threw for 292 and a pair of touchdowns vs Arkansas, a week after Matt Corrall had completed 14 of 21 passes for 287 yards, along with two touchdowns in the air and two on the ground.

Now comes the most accurate quarterback the Razorbacks will likely face all year: Mississippi State’s Will Rogers.

The sophomore is coming off the most accurate game in SEC history in which a passer made at least 30 attempts. Rogers completed 36 of 39 passes in a big 31-17 win against a No. 13 Kentucky squad that has one of the SEC’s best defenses.

Will Rogers is now completing 75.2% of his passes on the season, which is good enough for the fourth-highest single season completion rate in NCAA history:

Last year, Arkansas defeated a Mississippi State football team led by quarterback K.J. Costello. In that game, the second of the season, the Bulldogs mustered only 14 points and Slusher got in an absolutely slobber-knocker of a hit against Costello. It wasn’t until the next game, a loss against Kentucky, that Rogers took the field.

This year, Razorback defensive coordinator Barry Odom will next to figure out a way to mix it up against a Bulldogs squad that has now won four of its last five SEC games. “We’re two totally different teams, obviously, from that point last year to here now,” Will Rogers said yesterday.

It’s been a while since the Razorback secondary has made one of its “statement” games. Now would be as good a time as any.

Even before Jalen Catalon underwent season-ending shoulder surgery two weeks ago, Pittman and defensive coordinator Barry Odom weren’t shy about their feelings for Slusher, who arrived in Fayetteville as a 4-star prospect out of Broken Arrow, Okla.

He garnered high accolades—247Sports rated him as its No. 5 safety in the nation—and scholarship offers from Alabama, LSU, Ole Miss, Texas A&M and Notre Dame, among other schools, before he landed with the Hogs.

The question has never been whether Slusher had talent—the coaching staff always raved about his skills. The real question mark surrounding the 6-foot, 185-pounder has been his ability to stay on the field.

“I think Myles Slusher could be almost as good as anybody we have on defense—I do,” Pittman said ahead of the Texas A&M game. “He’s just been injured. … This guy’s got a lot of value for us, I’m just hoping he can stay healthy. Last year it was a high ankle [sprain] and then this year it’s some type of ham/squad, whatever it may be. If he can get healthy, he’s a really good football player and I think all of you will see that.”

“Athletically, there’s not a lot of guys that can go from safety to play corner, skillset-wise and how we’re playing it,” Odom said during preseason camp. “Slush is one of them. He’s able to give us some versatility. I really think he can play all five spots for us.”

Versatility Is Key With Catalon Gone

Jalen Catalon’s instincts aren’t replaceable. There is a reason he came into the year as a preseason All-American and projected first round draft pick: he had the athleticism to not only cover multiple positions in pass coverage, but he also attacked the line of scrimmage like a heat-seeking missile.

And, not only did Catalon provide the Hogs defense was a fearless force, he was also the brain of the defense—the guy who was always one step ahead.

Slusher’s best attribute is his versatility. His size doesn’t give him the luxury of being a true thumper in the secondary but at the same time, it does provide him with the flexibility to chase smaller, shiftier receivers.

That could come in handy if the Razorbacks decide to follow the advice of Jake Crain, who dedicated some time during his Oct. 18 podcast to address the Hogs’ coverage. He was incredulous about the secondary’s zone schemes and is certain Odom needs to start trusting his defensive backs more and let them play some man-defense.

If they don’t, Crain says, opposing offenses will continue to favor the short passes.

“Auburn took that the whole time,” he said. “If you look at where Arkansas struggled against Ole Miss too, it wasn’t just the vertical ball—they were hitting the holes in the zone, that’s where Barry Odom is going to have to make adjustments on defense.”

Look for some tweaks from Odom along these lines against Mississippi State on Saturday.

If Slusher was indeed a bag of nerves ahead of the Auburn game, the expectation should be that he and Chavis both gained some valuable confidence after each recording interceptions. Their confidence should have grown during this past week’s bye, which also provided Pittman and Odom some time to add some new wrinkles to the defensive scheme.

It isn’t going to get any easier for Arkansas against Mississippi State and LSU, that’s for sure. We have already discussed how Slusher, Chavis and the rest of the Razorbacks’ secondary will have their hands full against Will Rogers, who leads the nation in completions and ranks third in passing yards. No doubt, he is a threat to carve up Arkansas’ zone coverages if Odom does favor zone opposed to man-defense.

While Rogers leads the SEC in passing yards and completion percentage, LSU QB Max Johnson will provide a different test. Like Rogers, Johnson likes to throw it around—he ranks third in the conference with 2,009 passing yards and is fifth in passing yards per attempt (7.61). The fact the Tigers are willing to attack down field a little bit more does mean Slusher and Chavis should be prepared to chase receivers around opposed to staying back in a zone and letting routes materialize in front of them.

Both Slusher and Chavis have the athleticism to hang with both receiving corps, however. At this point, it’s a matter of the coaches turning the youngsters loose to take advantage of the inconsistency that Will Rogers still shows (he threw three interceptions against Alabama and two vs Vanderbilt).

Allowing Slusher—and the entire defense—to identify receivers and lock onto them in man-coverage could be one solution for Arkansas to prevent teams from dinking and dunking and beating the inexperienced secondary with 1,000 papercuts as they march down the field.

If the coaches are so high on the safeties’ athletic ability, it’s time to let them start flying around and make some plays. Doing so will certainly result in some growing pains because neither Slusher nor Chavis possess the experience that Catalon does.

But then again, those Team USA hockey players were pretty inexperienced when their great opportunities came.