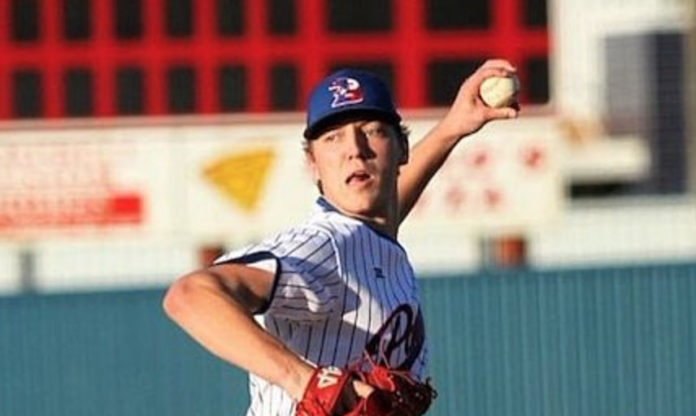 The Arkansas baseball team has brought in massive amounts of talent in recent years. The class of 2021 is no different. It’s the program’s third straight top-five recruiting class, and fourth in five years.

This year the Razorbacks are adding a pitcher who amazingly tossed seven no-hitters as a high school senior. Left-handed pitcher Hagen Smith is Arkansas’ second-highest ranked prospect, behind Peyton Stovall, remaining after the draft.

Smith is an incoming freshman for the Hogs with a ton of potential. Standing at 6-foot-3 and 220 pounds, the Bullard, Texas native is the top-ranked lefty and fourth-overall ranked prospect from Texas. He also ranked 12th nationally among lefties and is the 71st overall prospect according to Perfect Game.

Over 12 appearances during his senior season at Bullard High, Smith held batters to a minuscule .035 batting average against him while he maintained a 0.19 ERA, according to MaxPreps. He allowed just two earned runs on seven hits over 73 innings pitched and struck out 168 batters.

Smith was fourth in the nation in strikeouts and his ERA was the best in Texas and 14th nationally. The southpaw also pitched at least 20 innings more than any of the pitchers who recorded lower ERAs.

“I love being a pitcher.” Smith said in an interview with Prospect Live on Youtube. “I mostly attacked hitters with my fastball in high school, but slider is my favorite pitch to throw.”

He was selected to the Baseball America High School All-American First Team after his dominant senior year. This season was even more impressive due to him coming back from Tommy John surgery. Recently drafted Arkansas legend Kevin Kopps had to deal with the same surgery and he was able to bounce back in amazing fashion thanks to his hard work.

Smith underwent the procedure in the early parts of fall 2019 at just 16 years old.

“I really wasn’t that down about (the surgery),” Smith said. “I thought I’d be way more down about it. I looked and most everybody that had the surgery came back stronger.”

The global pandemic did not interfere with his rehabilitation and physical therapy, so he was able to continue on. It may have even helped Smith, who had no reason to rush back to try and play at the end of his junior season. The time off allowed him to be patient and rehab his arm correctly.

“Nothing really changed for him due to the pandemic,” his father, Jeff Smith, told Perfect Game, “other than it probably eased his mind not having to sit in the dugout and just watch everybody play for a whole season…So in his case, it kind of worked out in his favor a little bit, I guess.”

He used the extra time he had to work out and get stronger. He added 30 pounds over the past two years, going from 190 to 220 pounds.

“He was always slightly on the taller side but was lean,” Perfect Game’s South Region Director, Britt Smith, said.

“Now he is a physical presence on the mound with a strong lower half, showing strength and stamina with the ability to maintain his stuff for a complete game. His command has improved, as well. Hagen has developed the physical strength to repeat his delivery more consistently than before the surgery.”

Based on how Smith handled the situation, he appears to be a confident, smart, hard-working kid who will do things the right way.

Those attributes will only help him as he gets ready for SEC baseball in the spring.

“[Britt] Smith noted that even before the surgery, Hagen had one of the better breaking balls in the 2021 class,” according to Perfect Game. “A hard slider with a late bite that was his swing-and-miss pitch. And that pitch, Britt said, has gotten even more effective as this season progresses.”

His fastball is listed at 93 mph. Adding a plus slider to his repertoire could be a nice 1-2 punch for him.

Kevin Kopps’ cutter, which was slider-like, showed how effective a pitch with good movement is in college baseball.

Another thing that Kopps showed the importance of in his dominance was command. Even Smith’s own father was questioning his command coming off of the surgery, but Smith had it all under control.

“I wasn’t that surprised because that’s what I really worked on the most, coming back and rehabbing,” he said. “I tried to work on my command of all of my pitches wherever I was at…I widened my stride a little bit and I kind of shortened my arm path a little bit just to be smoother instead of snappy.”

There have not been many players with the same high ranking and hype coming to pitch for Arkansas.

In one of the best pitching classes in recent memory, the class of 2015 produced Isaiah Campbell, Blaine Knight and Kevin Kopps.

Campbell was outside of the nation’s top 500 recruits and Knight and Kopps were both outside the top 1,000. Knight is currently on the Baltimore Orioles’ Triple-A affiliate, the Norfolk Tides, pursuing a career in the Majors while Kopps is coming off of a Golden Spikes season in 2021 and is currently in High-A. Campbell had a dominant 2019 and is also in High-A currently, for the Everett AquaSox.

If Smith can replicate the season of the recently drafted Patrick Wicklander in 2021, Hog fans will be more than happy. The lefthanded starter posted a 2.09 ERA over 18 appearances, including 13 starts. He struck out 85 opponents in 77.2 innings.

Wicklander came to Arkansas in the class of 2018 as the No. 267 ranked recruit in the country. It took Wicklander some time to reach his full potential, however, based on the high school stats and national rankings, Smith should make an even more immediate impact.

Smith has a similar pitching arsenal to Wicklander with a mid-90’s fastball and sharp breaking ball. He has the tools to duplicate Wicklander’s junior season as a freshman.

Wicklander was an eighth-round draft pick in the 2021 MLB Draft, but Smith may go even higher. Wicklander was ranked 220th overall and 36th for lefthanded pitchers, but Smith was the 117th ranked prospect and ranked 17th among lefties.

Bullard High head coach Robert Ellis has worked with a lot of great players including Grayson Rodriguez, who was the 11th overall pick in the 2018 MLB Draft and is currently the top pitching prospect in the Orioles organization.

“Hagen Smith is better than (Rodriguez),” Ellis said. “I coached them both. I will stand behind it. If I had not coached them both, I couldn’t say that, but having coached both of them, they both exhibit a lot of the same qualities. The only separator for me is Hagen’s a better athlete. He’s a better mover.”

“He’s just scratching the surface,” Ellis said. “You could easily project him to be a guy that’s going to pitch 97-100, you may even see some 101s, 102s. He reminds me a lot of the Crochet kid from the University of Tennessee. He’s that good of a mover.”

Crochet was the 11th overall pick in last year’s MLB Draft and became just the 22nd player to skip the minor leagues and go straight to the big leagues.

Hagen Smith has a ton of potential and Arkansas fans should be excited to watch him pitch this spring.