Search
Home Arkansas Football Perspective The Razorbacks Have Gone Off Script in 2021. That Should Worry the... 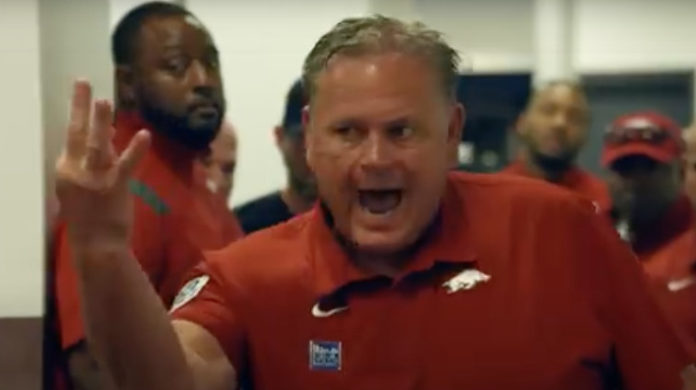 Arkansas fans: the calendar page flips to a new month after Thursday, whether you want it to or not.

Has this been the most gratifying September ever for this mercurial program? Hard to argue. In 2003, the last time the Razorbacks started 4-0, they also leveraged a second-game win over a ranked Texas squad to immerse themselves in the Top 10.

That they promptly went 0-for-October thereafter clearly deflated the goodwill, and frankly, Houston Nutt’s bloom was long off the rose by then. Even as the Hogs surged, the ensuing collapse stung.

That’s not to say this Razorback team 18 years later won’t have a similarly shaky month ahead. After all, it starts with a road trip to No. 2 Georgia for a game this Saturday and then a tilt at Oxford with No. 12 Ole Miss a week later.

But it’s hard to imagine an opening month of football playing out as beautifully as this one has. The Hogs completed the ballyhooed SWC Tent Revival with their latest masterpiece in all phases Saturday, handcuffing No. 7 Texas A&M 20-10 to cap a clear, resounding statement that the program — long overshadowed by its bigger Texas foes — now owns that state.

Razorbacks Suddenly the Toast of the Town

The pasting of the Aggies in the plum CBS afternoon game, so thorough in every way, vaulted Arkansas to No. 8 in the AP poll. That’s just the icing, though.

Count me among those who never ever enjoyed Clay Travis’ acerbic observations about sports, but the longtime Hog hater is a sudden believer. He’s not only heaped praise on Sam Pittman and his staff and players: this week, he tabbed Arkansas as his No. 1.

So, you say, Travis isn’t a pollster. And you might besmirch his credibility for any number of valid reasons.

But even leading up to kickoff in Arlington, Arkansas wasn’t getting the usual “Aw, isn’t the little upstart cute” treatment, either. The SEC Network’s Chris Doering boldly declared that the pregame betting line was simply wrong. He and ESPN’s Kirk Herbstreit, himself often cynical about the Razorbacks, confidently picked Arkansas to win.

All that positive prognostication played out as the Hogs outgained the Aggies by more than 170 total yards and simply abused a depleted A&M offensive line. The ensuing climb in the rankings cemented the Razorbacks as a national feel-good story.

Disrespect, however, is still part of the Pittman calculus. His fiery, inspired pregame and postgame addresses to the team demonstrate that he is practically elated when a pundit scoffs.

For searing proof, look no further than his pregame speech in the video below. It’s the stuff of running through walls:

And even this September surge doesn’t erase that. Georgia is admittedly a daunting foe, but when the opening line of -18 was announced, you know Pittman’s wheels started turning anew.

Then ESPN dispatched word that “College GameDay” will be in Athens for the 11:00 am kickoff, and even produced the below special around Razorbacks football for it. Lee Corso is likely to whip the fans into a frenzy around 10:59 a.m. Saturday when he dons a Bulldog head.

It’s an admittedly mild insult if Corso & Company pick Georgia. It’s also what fuels Pittman, and the man that hired him.

Long’s muddled management of the athletic department left everyone in these parts with buyer’s remorse. The fallout of Bobby Petrino’s justified ouster and Bret Bielema’s failings landed entirely in his lap.

Yurachek had no discernible hand in selecting Bielema’s replacement, though. Once Morris started choking immediately, it became clear that he should have.

The program’s present apex sprang from those humble origins. Yurachek’s personnel moves, one by one, created a genuine culture shock for fans accustomed to bouts of misery.

Hunter Yurachek quietly worked on image repair and goodwill. More visibly, he eschewed sentiment for performance when he sent Mike Anderson away politely and brought Eric Musselman to town. Musselman’s kinetic approach isn’t for everyone, yet it’s been a great fit so far in Fayetteville.

And Musselman, incidentally, borrows heavily from the Nolan Richardson Motivational Playbook of fiery intensity and using slights to fuel greatness. Pittman now emulates that same tactic, and it isn’t happenstance that Musselman and Dave Van Horn were among the first to greet and congratulate the affable coach on the jubilant sideline in Arlington.

Yurachek’s public appearances and comments push that narrative along. At the University of Houston, where he served as an athletic director, he operated under a VP title and oversaw a large department in a major metro area (albeit one that got short shrift when the SWC vanished).

Before that, he served as athletic director at Coastal Carolina. Again, he had a growing budget to work with, but statewide competition and prestige working against him.

Yurachek isn’t one to bemoan limitations or circumstance, though. Instead, he relentlessly, genuinely promotes the varsity programs across the board. Imagine that.

Why Georgia Should Worry About the Razorbacks

Arkansas’s upswing notwithstanding, Georgia is a deservingly prohibitive favorite, and not just on Saturday. Buoyed by savvy skill players and defensive speed and strength, this Bulldog team may be Kirby Smart’s best yet.

It’s also a team that struggled a bit to vanquish a diminished Clemson team. The Bulldogs’ SEC opener at Vanderbilt was a glorified scrimmage.

Being more tested, and certainly less regarded, isn’t new for the Razorbacks. They play a vicious schedule every year and take the field Saturday in the position of underdog for the 13th time in 15 games under Pittman.

Nothing inspires lesser teams more than being overlooked or undersold. But the trouble with this Hogs team now — for Georgia and everyone else left on the schedule?

This isn’t a “lesser team” anymore.

Preview of Arkansas vs Georgia: